A Look at the First Choir Concert of the Year

Choir holds the first concert in over a year 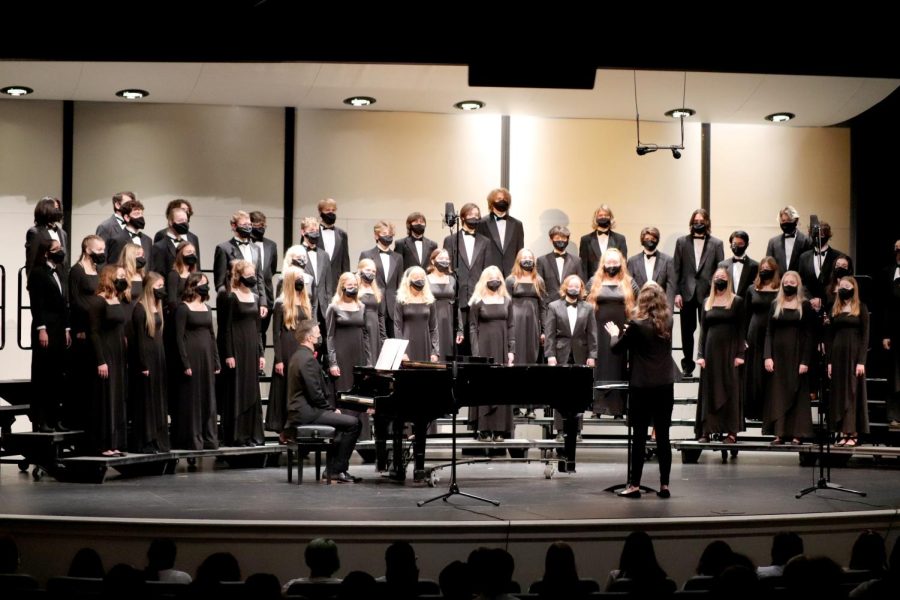 The City High choirs held their fall concert on Tuesday, October 5th, 2021. Friends and family of choir members gathered with excitement to enjoy the long awaited return of the City High Choir Program. Although classes continued over Zoom and hybrid learning last year, this was the first choir concert to be held in Opstad Auditorium since the shutdown in March 2020 due to  the COVID-19 pandemic. The concert was led by Tyler Hagy, Head Vocal Director and Matt Walker, Assistant Vocal Director.

“I think people were very excited to be able to attend a live in-person performance again. And I think from both the student perspective and the audience perspective, it was a wonderful celebration of live music” Hagy said.

The City High Choir Program is structured into four ensembles. The first is Treble Choir, which is only soprano and alto parts, and is primarily underclassmen. Little Hawk Singers is composed of tenor and bass parts. There is another soprano and alto choir, titled Advanced Women’s Ensemble, which is audition based. The last choir is Concert Choir which is filled with mixed voices and is also audition based. Each group performed at least two different pieces at the fall concert. For many students, this was the first time performing with a live ensemble since last year.

This is Ashley Kelly’s ‘23 first year in Concert Choir. Kelly was a part of an auditioned trio for the choir’s final song, Light of A Clear Blue Morning. She said that she felt the pressure as the concert date approached.

“We had to learn a lot of music in six weeks, and many of us had never learned music of that level before. I think we all were competing, not with each other, but to be the best we could be”, Kelly said.

Overall, Hagy felt that the concert was a success.

“There’s always stuff that you can fix, but I think they kicked it into gear to make the concert a success,” Hagy said.

The next concert is December 8, 2021. The Masterworks Concert is done every four years, and it combines the orchestra and choir programs.