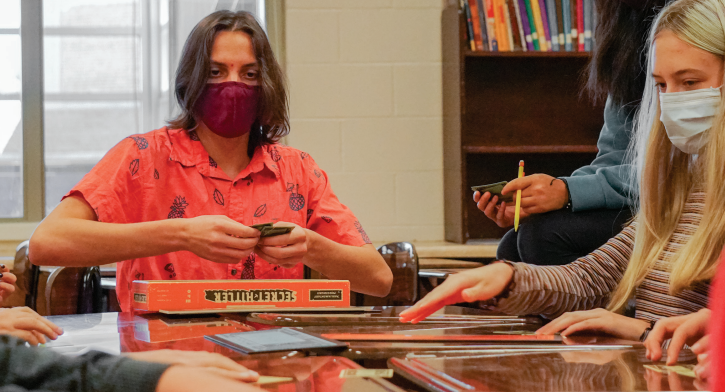 Board Game Club founder Ben Faden '22 leads group in a game during a meeting.

Students rushed from their classes after school, filling the seats of Mr. Schumann’s classroom, and the first ever meeting of Board Game Club at City High commenced. It was a combination of friends and strangers, with representation from each and every grade, all gathering together to play board games.

The club President and founder, Ben Faden ‘22, has loved board games ever since he can remember, and noticed the absence of a Board Game Club at City.

“I play board games at my local game store sometimes, and I’ve noticed that it’s primarily a bunch of white guys,” said Faden. “And that really bothered me that it was basically exclusively for this one group of people, and I wanted to make an outlet where I could introduce some of my favorite games to all sorts of people.”

Faden reports feeling very happy about the turnout at the club’s first meeting, with just about 35 people showing up initially.

“I was kind of surprised at the amount of interest [in board game club],” Faden said. “Anytime I talked to someone about this and introduce it they’d always be excited about it, and I knew it could really be for everyone.”

So far this year, Board Game Club has played several social deduction games, which entail players having a secret role and attempting to complete various tasks while figuring out other players’ roles.

“We’ve played games like Ultimate Werewolf, where werewolves are hidden among villagers, and Two Rooms and a Boom, where there are secret President and Bomber roles,” said Faden.

According to Faden, he owns a large collection of board games and he’s excited about the prospect of sharing them with club members.

“[Board games] can come in all shapes and sizes,” Faden told The Little Hawk. “It can be a hobby for basically anyone.”

In the coming weeks, Board Game Club will be offering an assortment of board games, including war games, euro games, party games, and more.

“The goal is to introduce people who wouldn’t otherwise be introduced to certain games,” said Faden. “[Board Game Club] is providing people with a chance to play some cool games and have fun with their friends.”