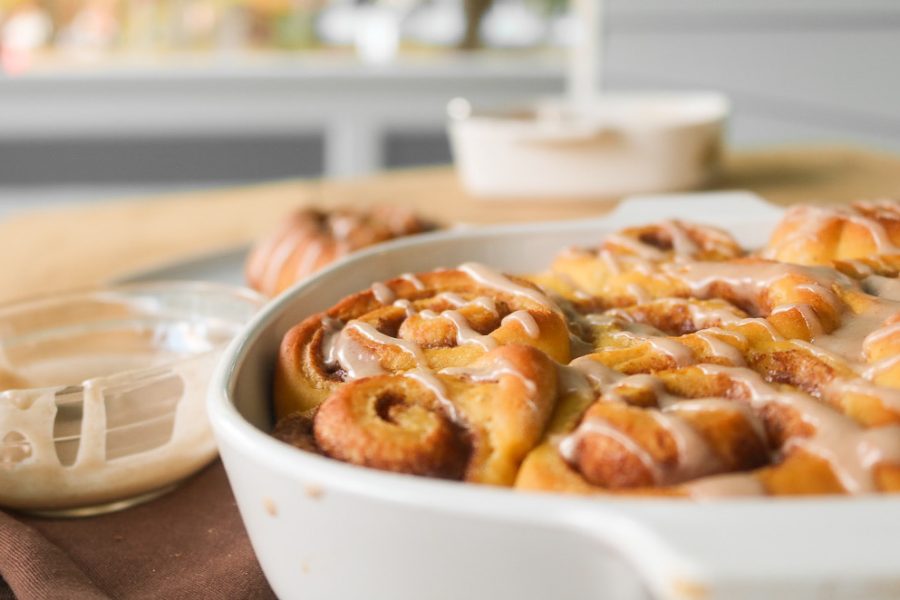 Jump into your holiday baking with these pumpkin cinnamon rolls. Full of spices, and topped with maple cinnamon icing, these treats are perfect to warm up with on a chilly fall morning.

2 and ⅔ cups all purpose flour

Step 1: Warm the milk and butter together until the butter is melted and the mixture is lukewarm. Whisk the pumpkin puree, sugar, nutmeg, and salt together in a large bowl. Add in the warmed milk/butter, egg, and yeast and mix until combined.

Step 2: Using the dough hook attachment or mixing by hand with a spatula, mix in 1 cup of flour. Mix for 1 minute, scraping down the sides as needed. Add 1 and ⅔ cups more flour and beat for 1 more minute. Knead the dough for 3 minutes, either by hand or in the mixer.

Step 3: Put dough in a greased bowl and let dough rise in a warm place for two hours, or until about doubled in size.

Step 4: Punch down dough to release the air. On a lightly floured surface, roll the dough into an evenly thick 10×14-inch rectangle. Grease a 9-inch baking dish.

Step 5: Spread softened butter evenly over rolled out dough. Combine the brown sugar, cinnamon, and spices into a small bowl, and sprinkle it all over the butter. Roll it up tightly, and cut into 10-12 rolls. Arrange rolls into prepared pan.

Step 6: Cover rolls tightly and allow to rise until doubled in size, about one hour. Preheat oven to 350 degrees Fahrenheit. Bake rolls for about 22-28 minutes or until they are lightly browned on top. After about 15 minutes, tent a piece of aluminum foil over the top of the pan to prevent the tops from browning too quickly and baking unevenly. Remove pan from the oven and place pan on a wire rack for about 10 minutes as you make the icing.

Step 7: In a bowl, whisk together the powdered sugar, milk, maple syrup, and cinnamon until smooth. Drizzle over the cinnamon rolls. Serve warm, or store covered for up to two days.