Between the Pylons: Fantasy Football Breakdown for Week 10 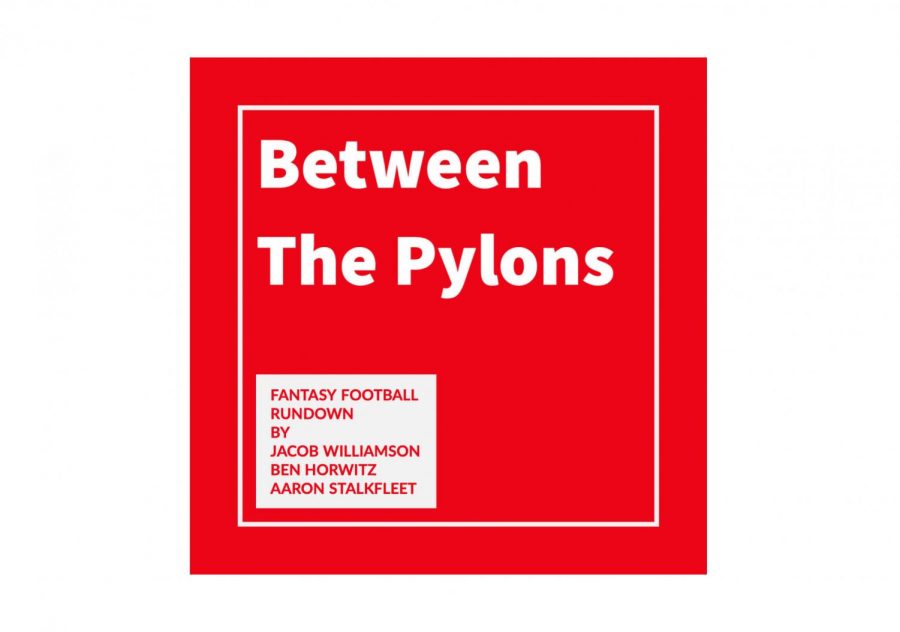 Between the Pylons is a Fantasy Football advice and analysis show.

Hello everyone. The voices behind this column and our podcasts are Ben Horwitz, Aaron Stalkfleet and Jacob Williamson. We are current seniors, and involved in various things (and sports) at City. Our shared love of football and aggressive competitiveness is what initially inspired this column. Each week we plan to put out a different fantasy football prediction/analysis for the next NFL week. We appreciate your support and will be competing to see who has the best analysis.

This week we are doing a Boom/Bust analysis. We randomly pick the players below for this week’s games, and we each get to predict whether we think they will go above (Boom) or below (Bust) their ESPN fantasy projections. We each pick two players from each position group. We make picks based on matchups, personal opinion, and player projection. After the first week, we will be keeping track of our personal records of our predictions throughout the season.

OUR RECORDS THROUGH 9 WEEKS

(All based on ESPN projections)

4-4 is the best week I have had in a while; I’ll take it. There isn’t a whole lot to say other than I hope to follow it up. An above .500 record this week would be great. I am slowly inching my way toward Ben in the standings.

Russ has been out for 3 weeks plus the bye so you can only imagine he is eager to get back into the starting lineup. I like Russ to make his impact felt against a mediocre Green Bay defense and thus, boom. This selection is on the middle-end of the confidence scale.

Josh Allen is not booming 27. To me, it doesn’t matter that he is playing the Jets. It is harder to put up a performance like that against a lesser opponent believe it or not. I see him getting in the 18-27 range, but not over 27.4. This is a high confidence selection and it should be noted that I still do believe that Josh Allen performs well. But, for the sake of the game, no boom is in store.

This is, to me, about as obvious as it gets. I think Williams booms 11.7 gracefully in a matchup against the Eagles. Williams rushed for 111 yards last week on 17 carries, he just failed to reach the endzone. The Broncos played a perfect game last week against the Cowboys, and surprisingly, looked like a team that can make a run at a Super Bowl. Williams definitely played a huge part in that and will continue to have to do so in order for the Broncos offense to find success.

James Conner is coming off a career performance against the 49ers scoring an astounding 40.30 points. Part of that was due to the injury of his counterpart, Chase Edmonds in the opening stages of the game. With Edmonds slated to miss this week too, I like Conner to boom 17.8 pt projection and really solidify his role as the lead RB on the Arizona roster.

Michael Pittman Jr. has really played good football as of late. His last 3 performances consist of 17.4, 30.6 and 20.50 points. It is no coincidence that the Colts are 2-1 in those games with the lone loss coming to their division rival in the Tennessee Titans. Bottom line, Pittman Jr. is playing the best ball of his young career and I expect another great week this week against the Jacksonville Jaguars, a team that is rather bad on the defensive side of the ball.

Like I mentioned in the Javonte Williams boom/bust analysis, this one is pretty obvious to me. Waddle’s season has been characterized by up and down performances. On top of that, this week, the Dolphins have the Ravens. I like Marlon Humphrey to lock down Waddle and as a matter of fact, hold him under 8-9 points. I see Waddle not even coming close to his 15.1 pt projection.

This is probably the hardest projection I write all week. Kittle is coming off a great 20.10 performance against the Cardinals. That was his first game back after a 3-week long absence due to injury. To the point, the Rams are gonna be firing on all cylinders this week after their loss last Sunday to the Titans and I expect them to shut down Kittle and Samuel for that matter. Kittle busts 13.9, but it is as close as it gets. This selection, unsurprisingly, is on the lowest end of the confidence scale.

Ertz busts against the Panthers this week. It is close but he has only scored 5.7 and 8.2 respectively the last two weeks. In other words, his production hasn’t been all that impressive. It kind of sucks in terms of projecting boom and bust when the player in question has a total below 10. It makes it hard but I am leaning bust this week for Ertz based on feeling. Logic does not necessarily apply to this analysis.

Going 2-6 after last week’s performance was rough, to say the least. There is not much else to say other than that I need to be better to keep me in contention with Aaron and Ben record-wise.

After last week’s terrible performance in the loss against the Jaguars, look for Josh Allen to return back to his usual self against a notoriously bad Jets defense. With that being said, I don’t see Josh Allen going over the 27.4 point threshold though.

Nobody’s name has been mentioned more on social media the past 10 days than Aaron Rodgers. With Rodgers having to miss the past 10 days due to Covid-19, I expect him to be back to his usual self and do very well this week against the Seahawks. Due to the fact he hasn’t been able to participate in any practices, things might be a little rusty but I have a gut feeling that this will be a monster game for Rodgers.

Not many expected McCaffery to have the season that he has had so far. With that being said, McCaffery is one of the best backs in the NFL when healthy and is a huge problem for any opposing defense. While playing the Cardinals this week might not result in a win for the Panthers, McCaffery will have a major role this week, especially when going up against a Cardinals defense who has struggled to stop the run all year.

No one has more rushing touchdowns than Conner this season and for good reason. Conner has been a major red-zone target for the high-powered Cardinals offense this year. With their normal 2-3 down back in Chase Edmonds being hurt this week, I would expect to see Conner’s role increase significantly.

After coming off a close overtime loss last week to the Ravens, Jefferson should get most of the targets again this week against the Chargers. Although Jefferson hasn’t scored many touchdowns in the past few weeks, his share of targets has been about as good as anyone in the league. Expect him to get the ball a lot this week as the Vikings try to get by the Chargers.

Although Waddle had a very good game against the Texans last week, I just don’t see him going over the 15 point threshold this week. Unless Tua starts playing better I can’t give him the boom.

Pitts has been untrustworthy, to say the least for any fantasy owner, while playing on one of the worst teams in the league, Pitts has been a steady 8 or fewer points a game for most of the season. Although Pitts might have the makings to be a future star, until he can get a better team around him, I don’t see him scoring a top 3 tight end caliber point total.

With having only been on the Cardinals for a couple of weeks, Ertz hasn’t been much of a factor as people would have hoped. Hopefully, if Kyler Murray can return this week, Ertz should see his fair share of targets and go over his point total for the week.

Average outing last week, with a decent 4-4 record on the week. Could have been better, just missed one or two projections yet again. I need to get a positive week going here, sitting on the edge of a negative record. Still managing to stay above the other guys but one week can change that completely. Time to show everyone who is the best analyst.

Among a newsworthy week of Aaron Rodgers and vaccination issues, he will come back to play a big game this weekend against the Seahawks back in full form with Russell Wilson. Aaron tends to play well in big games (except for NFC championships) so expect a nice outing for the Packers. Especially with all the backlash he has been receiving lately, I hope he will be angry and come out ready to kill on Sunday.

This is a first for me, as I get to project two QBs who happen to play against each other. As I see it, Russ is back, let’s put the league on notice. I’m hoping for a shootout in what will be a fun matchup against the 7-2 Packers, and possibly a must-win game if the Seahawks want to keep any playoff hopes alive. Possible shootout, can’t bet against Russ.

Cordarelle Patterson is a fantasy football gem. Previously seen as a WR, he has adjusted into a hybrid RB role for the Falcons this season, making him a great pass-catching back. He manages to get a consistent 17 points per game, without scoring many touchdowns, which makes him even more valuable. I see him getting 15 points, but not breaking out this week. Could go either way, but after the rough game last week I see the Cowboys getting serious this week.

Javonte Williams has all the tools to become a top RB in the league, and his tough attitude makes it hard to not root for him.  Right now he is sharing carries with Melvin Gordon, but his ability to be a receiving back could give him an edge in the coming weeks. This one could go either way as he is not much of a TD threat, but I see Javonte having a solid game this week, following his recent 111-yard outing.

The Titans are rolling. After losing Derrick Henry, many thought their season would be over, but after last week’s dominant win over a top 5 Rams team they are shaping up to be a top team in the AFC. Brown is the #1 option, which means he is going to have Marshon Lattimore tail him all game. Lattimore is a stud, although he might not get the recognition he deserves. I never trust receivers going against him, but it could go either way.

Micael Pittman has been one of the biggest beneficiaries of the improved Colts offense of the last few games. Jonathan Taylor has emerged as an elite RB, and with that Pittman has more room to make plays. He is averaging over 20 fantasy points per game in the past three weeks, and against a weak Jags team, I think the 14.2 projection is almost disrespectful.

The people’s TE is back. Straight off of IR, Kittle had a solid 19 point outing, which makes me hopeful for the rest of the year. In a tough matchup against the Rams, I see head coach Kyle Shanahan passing the ball a ton, and Kittle is one of two main targets right behind breakout WR Deebo Samuel. Play Kittle with confidence.

I bet on a TE playing well against Denver last week, and it didn’t pan out. Call me biased as a Broncos fan, but after the great performance against the Cowboys last week I am trusting their defense against a shaky Eagles team. I think the Broncos win big, lets hope the Eagles don’t get garbage time points like last week.