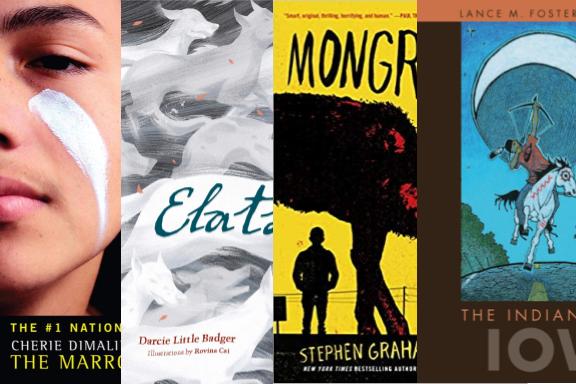 A: Marrow Thieves is great, it’s one of the more popular native books that is out there. It’s about these kids and adults who are working together to try and save themselves against people trying to capture them and take them away and to steal their bone marrow.  I think that Marrow Thieves reflects a lot of things that happen to indigenous people globally, and in the United States and Canada. Where this is, is that Cherie Dimaline describes the places where they took kids to take their bone marrow as schools and stuff like that. In recent years, I think that more white people have acknowledged that boarding schools were a thing that happened to these people, but they have been happening for decades and decades. They only stopped like, three decades ago. So I think that Marrow Thieves reflects a lot of interesting things about indigenous life. It really focuses on language preservation, which is really important to me and my family. My dad’s a language teacher for my tribe. I’m trying to relearn my language, because a lot of it has been taken from us through boarding schools and a lot of other effects of colonization.

Q: In this book, the world is ravaged by global warming. What is the significance of this in the real world?

A: Global warming is the apocalyptic thing that happens in the book. The way that Cherie Dimaline handles it is that all of the water that was readily accessible to white people was screwed over by global warming, and by their own effects of pollution. So they started going after indigenous water in Canada and places like that. That’s very similar to a lot of things that are happening to indiginous people now, because a lot of us are having water issues. People that live on reservations and other very Indian communities just don’t have clean drinking water and don’t have water access. There’s so many pipelines that are trying to destroy indigenous  water sources, and all of these different things.

A: Elatsoe is probably my favorite on this list, not because I think it’s the best written, I just think that it’s really good. Elatsoe offers an intersection of queerness and indigeneity, which isn’t super common, because it’s like one thing to get an indigenous story out there; It’s another thing to get your queer indigenous story out there. The author is asexual and the main characters’ asexual, you can see it throughout the book. But that’s not the main point of the book. Elatsoe talks a lot more about indigenous ways of teaching and community.  I think the most important bit is the way that magic works in this book. For Elatsoe, her power is passed down through a teacher. Which is really important to me, because I think a lot of times settlers get this idea in their head that indigenous self; like you as an indigenous person, is all about “ this is biologically my father”  or “ this is biologically my mother”. Blood quantum isn’t how we do things naturally, instead, it’s a lot about kinship and knowledge sharing. So the way that magic is passed down is through knowledge sharing.

A: Mongrels by Stephen Graham Jones is a very good book. Stephen Jones is a popular native horror author. He’s written things like “The Only Good Indians” and stuff like that.  This is the only one that I would really recommend to  highschoolers. I haven’t read his other ones, but my dad has said that they’re pretty for, like ,adults.  Mongrel’s kind of horror. It’s about all these native people who are werewolves,  and the main characters are like werewolves or indiginous people who are disconnected from their communities, so they’re just traveling around going from one place to another. Mongrels talks a lot about how communities are important to introduce people, but also how we are able to survive outside of those communities and still keep our knowledge system and culture.

Q:  Confusion about growing up strange and werewolves. In what ways does this connect to indignous identity ? Symbolism with werewolves, etc?

A: We know this, but werewolves are like pack people, right? Indigenous people are supposed to be; not supposed to be, but it’s better to be with your communities.  I didn’t grow up near my community. Iowa City doesn’t have a large Native community, there’s like 10 Native families. I know at least half of them  because you go to those Indigenous People Days events, and then you’re like, “ Oh my God, hi! I already know you”  It’s really difficult sometimes to be so far away from your community.  I think this book talks a lot about it, and it  talks a lot about how being in an area that is not for who you are, and who your people are, and how that can be really troubling and different. I think the allegory is really interesting. I think that if you do read Mongrels as a settler, you should probably think about all of these things.

A: This is a book that I recommend to literally anyone who lives in Iowa. I think that it’s super important to know whose land you are on, because this is not our land. It’s not my land, my people aren’t from Iowa. Lance Foster is a super good source, because he’s a part of an Iowa Tribe. He’s done a lot of work with these people. In the acknowledgments for this book, there’s like a million different people. He’s worked with a bunch of different tribes, and he’s really well researched. Lance Foster doesn’t just say, “ Oh, these people were here, these people were there.” He talks about how they moved through time, because that’s another thing, the Meskwaki are the only native tribe here in Iowa right now. We’re not originally from Iowa. So you need to really think about it as a shifting thing. As people were pushed west, people took their places and more and more and more. So you need to understand the life changing history of who was here. Indians of Iowa also talks about their ways of life and how they existed; I think that’s super important, it also talks about who they are now, which is also important, because we are not gone.

Q: Do you think there is significance to having indiginous people talk about indiginous history?

A: One hundred percent. I’ve read a lot of books by white people, because that’s mainly what’s out there. There’s just a really different amount of respect and care that’s given. And just you can tell it’s written by a native person because of the amount that he cares about what we do and who we are for sure.