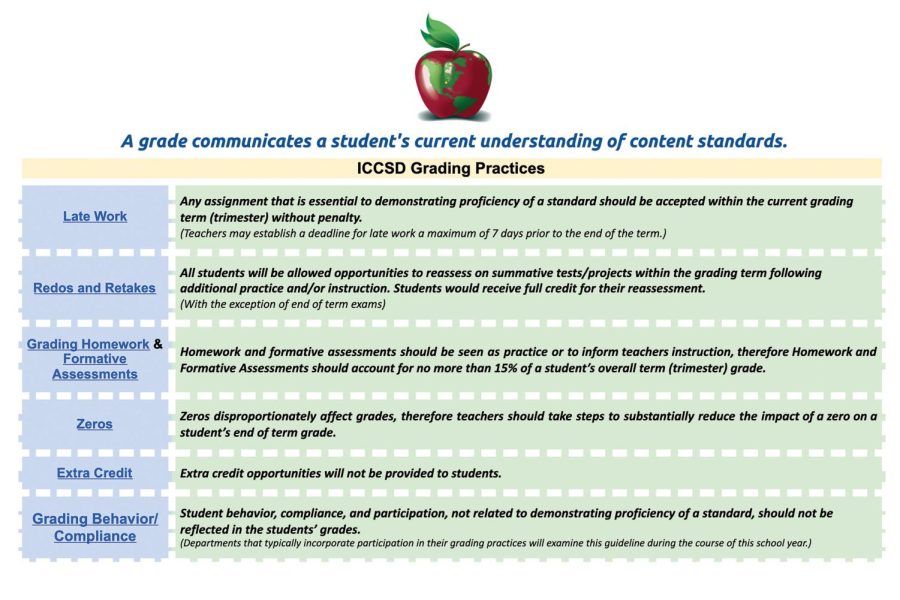 The idea of what a grade should actually represent has become a question for both students and teachers in lieu of the release of the new ICCSD grading policy. Covering six different topics including test retakes, the percentage of a grade that homework should represent, extra credit, and three others, the new grading policy will certainly change both the composition of students’ grades and what the grade represents in the first place.

The idea of measuring understanding with 0-100 is an exceptionally flawed concept, especially in common cases where grading is subjective to the teacher’s preferences, such as essay writing or discussions. Therefore, attempting to measure a student’s understanding of the course material as accurately as the letter-grade system tries to be is impossible. The measures that the district is outlining intend to establish more objective guidelines for grading to minimize the effect of this.

Part of the new grading policy outlines the percentage of a student’s grade that should be represented by day-to-day exercises, stating that homework and formative assessments can only account for 15% of the grade. For classes like Math and Language, where homework likely represents a large percentage of the grade, changes are going to have to be made to lessen the extent of homework’s effect and greaten the effect on the grade of more influential tests and quizzes.

Dr. Michael Ayers, who teaches various English classes such as US Literature and AP Language, does not use traditional homework or assessments to grade his students. Instead, he grades on participation in discussions, annotations, and essays.

“The 85% clause (referring to the percentage of the grade not represented by homework and formative assessments), requires that departments have those conversations again about what the important things are that we want students to take away from our classes and to understand when they’re done with those classes,” said Ayers.

In many cases, assessments are the most efficient and accurate way to measure a student’s understanding of material. While grading systems in which homework represents a large percentage of the grade prioritize the work that is put in to complete that homework every day and on time, the district is essentially saying they believe that the ultimate understanding of class material is a better characterization of a grade.

Another important guideline issued by the district in the new policy is that test retakes must be readily available and give full credit. This change is another one designed with the idea of understanding in mind, as in classes where tests represent such a large percentage of the grade, just one failed assessment could completely tank a student’s grade on its own. Therefore, students will be able to retake tests whose grades they were unsatisfied with, gaining full credit for their understanding regardless of whether that understanding was present during the time of the initial test or not. Similarly to the test retake policy, late work will be accepted without a penalty under the new guidelines (unless it is turned in with less than seven days left in the trimester).

Overall, the changes in the grading policy will be a net positive for students. While there are certainly tangible negative effects to some of the changes, grades that more accurately reflect understanding should lead to a consistent system where students are encouraged to ask for help in understanding the material and are provided with the resources they need to do well, and the time and leeway to achieve their desired grades.