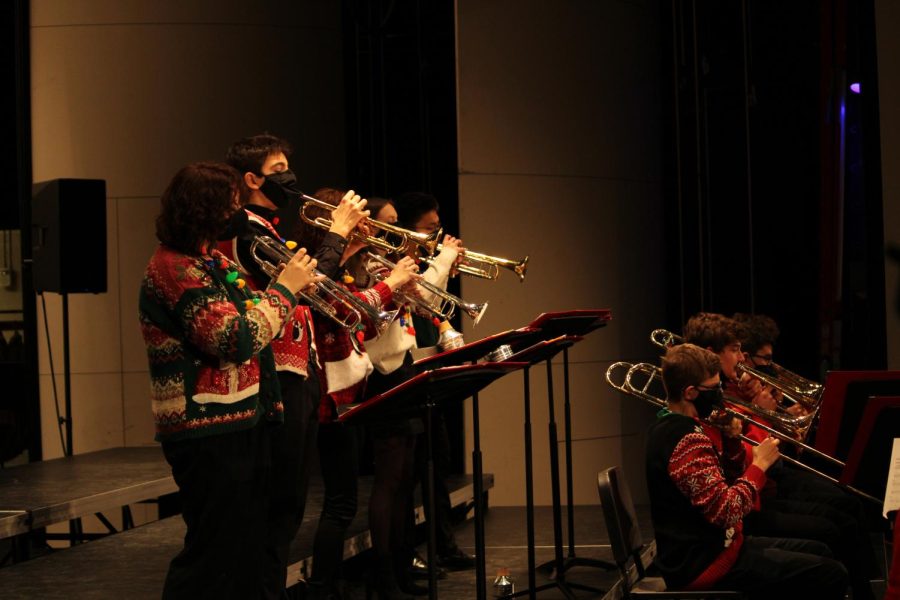 Members of Jazz Ensmble performing at the Winter Show

“I am super excited to be back competing after two years away,” Nora Gibson ’23, who is in Jazz Ensemble, said.

The Winter Show on December 11th was the first live performance since the pandemic started. Put on annually, the show features both of the show choirs and two jazz bands as well as various special acts.

“It’s refreshing to come back in, be with people, and do something that you love again,” Jake Roth ‘22, a member of the 4th Ave show choir, said.

The music department has faced many challenges during the past two years due to the pandemic. Performers have been met with online and socially distanced rehearsals, no public performances, masked singing and playing, and a skewed sense of community.

“Last year, we couldn’t do show choir [shows] at all,” Roth said. “We couldn’t perform. We couldn’t sing at all when we were dancing.”

Choir director Tyler Hagy believes the challenges have run deeper than just masking logistics. The pandemic has caused the entire music community to be more disjointed, something they are still recovering from.

“I think probably the biggest thing that we’ve seen that carried through has been challenges with enrollment,” Hagy said. “Getting people interested again and remembering about it again has been a challenge for us.”

Despite the setbacks, music students are excited to be back to performing in front of a live audience.

“We still had to wear masks, so it’s not back to how it was two years ago,” Gibson said. “But it’s good to be back.”

While a feeling of true normalcy still remains far away, students and directors alike believe that progress is already being made to get there.

“I think the students that we have are very happy to be together again, and I also think they feel like they are connected again to the group,” Hagy said.