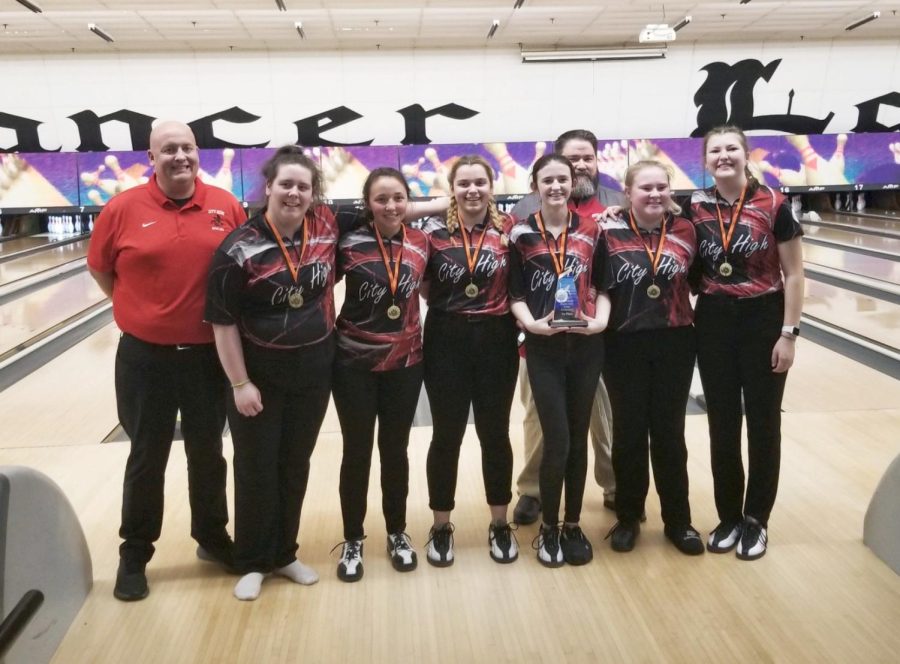 The girl’s bowling team traveled to Cedar Rapids Prairie to compete in the Prairie Baker tournament. This meet came down to the final set, it was a best of three and the matches were tied 1-1. The third game came down to the very last bowler, Elyse Rios of City High picked up a massive split and drilled a strike to give City High the lead and put the pressure back on Prairie.

“Their girl knocked down 8 pins on the first shot. On her second shot she needed the spare to secure the win and she missed it allowing us to claim the title.”

City High bowled an average of 175.93 which led the tournament, and knocked down 2463 pins.

“I think the girls have really learned to trust each other and to put the team before “I”.”   Degner said.

He also describes how much the team understands each other and how the atmosphere has evolved.

“By trusting each other it takes the pressure off of everyone that when a bad shot is made, your teammate will pick you up on the next ball.”

Degner expects these next matches to have a big impact on the rest of the season.

“These next two matches on Friday, December 17th and Monday, December 20th against Linn-Mar and Western Dubuque will go a long way in deciding the conference champion.”

Degner’s prediction was right, the little hawks defeated both these teams and are now ranked first in the MVC conference with a 6-0 record.

According to Degner the goals remain the same, to win it all.

“The goal remains the same for the varsity girls team and that is to win conference, get back to state, and hopefully compete for a state championship.”