Why We Talk About Bruno 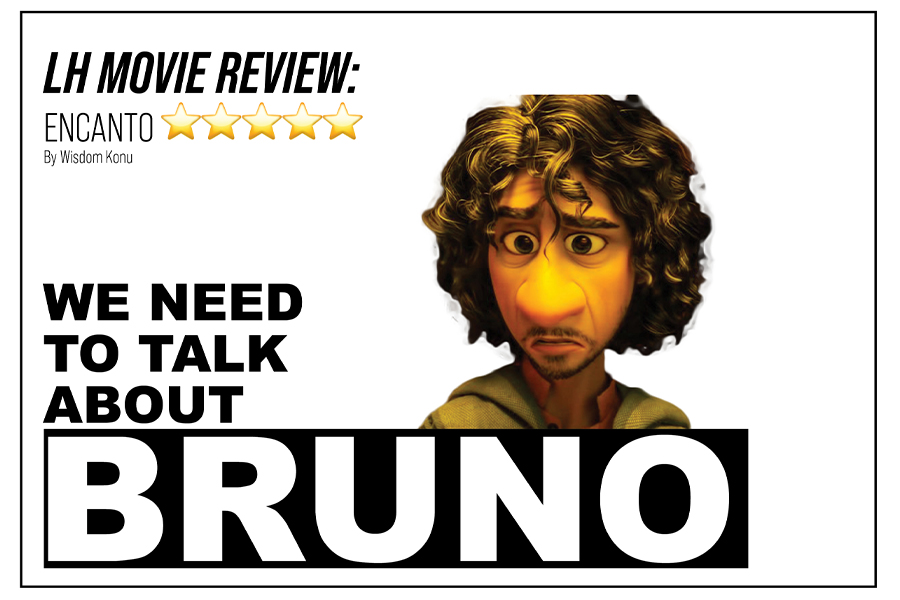 LH Movie Review: 5 Stars for Encanto, the recent Disney movie's most popular song is We Don't Talk about Bruno.

Even though we’re not supposed to be talking about Bruno, EVERYONE is talking about Bruno. Disney’s newest 3D animated film has ignited a buzz for its complex characters as well as the importance of them. It not only brings light to the complexities of Latinx households but does so with addictive music and beautiful design. Encanto serves as a colorful, feel-good, family-friendly musical with a deeper tale of generational trauma that hides behind it. Both Bruno and Mirabel’s trauma go hand in hand as the scapegoats of the family, there’s a reason why we’re talking about Bruno and the reason is the ups and downs of family.

The film follows Mirabel, a 15-year-old Colombian girl, who is the only Madrigal who has received no magical powers to serve as her family and community’s miracle. The generational trauma is first portrayed at the very beginning of the film when Mirabel is about to have her door ceremony and Abuela narrates the story of the family to her. At this first telling, in the flashback, we see a more serene Abuela telling her tragic story while concealing the real pain it provoked in her.

With Abuela, as we see throughout the film, she is the head of the family; always pushing everyone to do what they’re supposed to do and shunning those who choose to do something different. This comes out of fear of losing anyone else, but in her attempt to keep the family together and functional, she emotionally abuses its members. We see that clearly with the characters of Bruno, who was taken out of the family narrative, and Mirabel, whose love is constantly rejected by her Abuela.

Bruno, the one most affected by Abuela’s abuse, is shunned by Abuela and is ostracized by the village and his family. His situation is so painfully tragic. Bruno sits adjacent to his family’s dining room trying to keep close to them while staying away on purpose. He left to protect Mirabel and just like Mirabel, he feels as if he needed to do everything he could to please Abuela like him leaving to please her and patching up the cracks on the wall.

As a result of Mirabel not receiving a gift, Mirabel faces ignorance, betrayal, taunts, and the pressure of being directed by the family members. Mirabel tries too hard to make herself useful for the family even when they’re constantly diminishing her for not having any power. When Mirabel says the magic is vanishing and the casita is falling apart, Abuela immediately shuns her in front of everybody, and at some point, Abuela blames her for what’s happening. She’s the only one without a gift and for that reason, she is being blamed for the situation when she is the one trying to fix everything.

But we must take a look at Abuela Alma’s trauma. Abuela’s story is about colonization and indigenous displacement. Abuela and the community were forcibly displaced by the violent colonizers. Abuela had to flee her home with her husband Pedro and three babies and saw him get killed right before her eyes trying to save the community and that is when she received the miracle. Abuela talks about how every day of her life since has been spent trying to preserve the miracle his death left them. This scene is very important as it shows how Abuela, who is portrayed as the movie’s “villain”, is driven by love.

Encanto showcases the duality of family. The beauty and love that comes from it and the unrelenting pressure and sadness that can come from it too. Encanto shows that we don’t owe anyone forgiveness, but we can learn and listen from one another and grow from that.