Putting their boats in the river water, the University of Iowa’s Juniors rowing program takes off 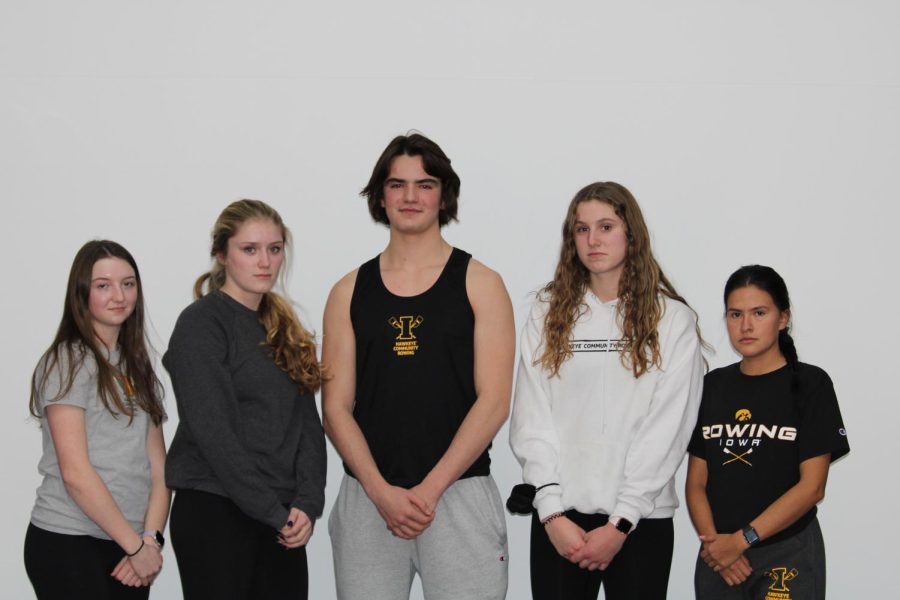 Rowing is a very uncommon sport leaving not one school in the area to have its own program. Considering this fact, it makes the University of Iowa’s Junior program so much more special to young athletes. The program allows for an excellent opportunity to become closer with other students who all share the same passion. “This setup allows you to meet new people from all the schools in the area because it is a community sport…it is such a great team atmosphere,” Fincham says.

Our very own City High students, Brody Clarke ‘25, Marty Powers ‘25, Leo Partridge ‘25, Landon Griffin ‘24, Madeline Fincham ‘24, Izzy Greving ‘24, Savannah Pisarik ‘24, Liam Clarke ‘22, and Kimberly Marquez ‘22 are all members of a rowing team with the University of Iowa. “I like the team aspect of this program but also the focus on personal goals. It is very mentally and physically challenging,” Pisarik says. City High does not offer its own rowing program but the University of Iowa has a juniors rowing program for anybody in the area aged 12-18. “My mom was scrolling through Facebook and came across an ad for this program and she said I should give it a try,” Greving exclaims.

The University of Iowa’s Juniors rowing program practices five days each week and each practice is a couple of hours long. “It is kind of hard and I feel tired every night from it, but it has helped me grow strong,” Greving says. A normal winter practice starts with a couple of laps around an indoor gym followed by dynamic stretching. Next, the rowers will do their workout, if the workout is shorter they will do a quick ab circuit. Each practice will then end with dynamic stretching. “The workouts are very vigorous and sometimes I want to cry,” Pisarik said.

A few of these rowers traveled to Tennessee for the Head of the Hooch competition in November. For this specific meet, teams did not have to qualify, but that doesn’t mean the competition was weak. The Head of the Hooch is a weekend-long rowing race that gathers rowers from all over the country. Brody Clarke ‘25 has only been rowing for two years and he placed fourth in the u15 men’s junior race. “I was so thrilled but I figured I’d do pretty well considering I was a lot stronger than most of the other boys,” Clarke says.

Due to how large the meet was, many athletes felt the effect from nerves, but they were also excited for the opportunity to compete with other programs across the nation. “Going into the race I was nervous but excited, I just wanted to get it over with,” says Marquez. City High’s athletes came to this meet intending to have a good time and to experience what a bigger meet is like. “I would love to do it again just because the energy itself of the race is immaculate,” Marquez said.