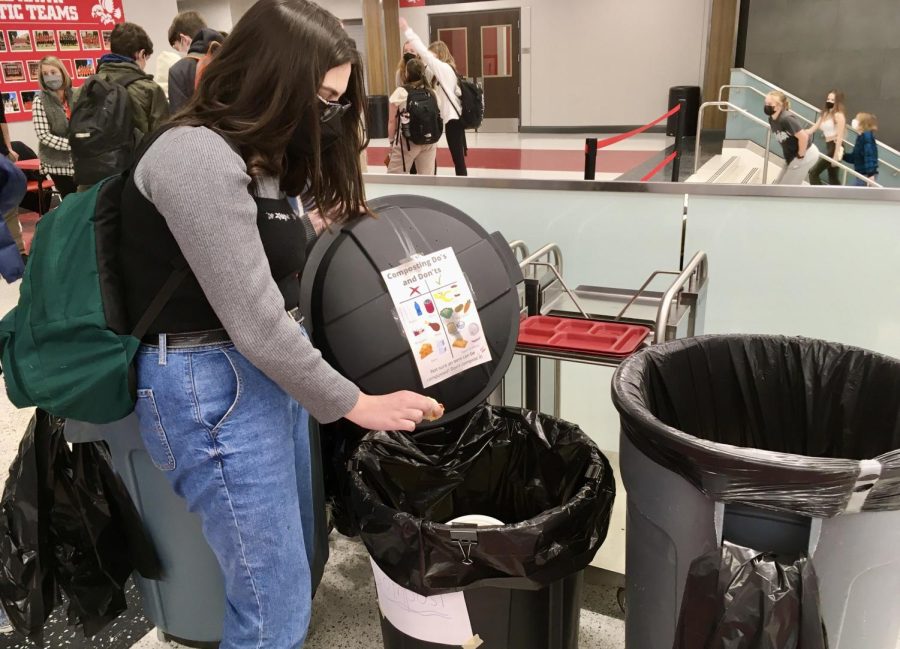 After months of planning and anticipation, the City High Environmental and Gardening Club has officially launched a lunchroom composting program. The program began at the end of January as a pilot project, however, it continues to expand as the Iowa City Community School District (ICCSD) is sending a truck biweekly to pick up the new compost bins.

Nora Gibson ‘23 is a co-president of the Environmental and Gardening Club and has been one of the main contributors to planning the new composting program. She says that it has taken immense work and planning to achieve approval, but she is happy to see how far they have come.

Mary Lestina is a science teacher at City High teaching Physics and AP Environmental Science. Lestina is also the teacher sponsor for the Environmental and Gardening club. Composting is something that she has thought City High could achieve for a long time and is glad that it has finally begun.

“This is something that I envisioned the school could be successful at for a long, long time,” Lestina said. “I was excited when our group came together and decided that that was going to be a mission this year.”

Both Lestina and Gibson believe that this new composting program is extremely important in helping City High be greener by sending less waste to landfills. Before composting, all of the waste from the City High lunchroom trash bins would go right to the landfill.

“It’s important for City High to have composting so that we do not contribute as much to greenhouse gas emissions and overall global warming,” Gibson said.

Gibson hopes that this attempt at composting will end more successfully than past attempts have. This composting program has support from the district and administration which Gibson thinks will help to make it more sustainable.

“I think that the attempts at composting in the past have been accepted well, but the only issue with those is they haven’t been able to be sustained, with not enough support and money and volunteers,” Gibson said.

The Environmental and Gardening club has made posters about the composting program and is also planning on making an informative video for students to watch about what things from the lunchroom can and can not be composted. Lestina hopes that they can continue to find more ways to spread the word around school to keep growing interest in composting.

“I think the more that we publicize it and make sure that students know about it, the more successful that we will be,” Lestina said. “Having a clearer picture of what can and cannot be composted is key for this to be successful because if students don’t know, they’re just gonna throw it away”

So far, the composting bins have been filling up less than halfway after all three lunch periods according to Lestina and Gibson. However, Lestina thinks that composting is important for the school community regardless of how much they end up collecting every day.

“I think it’s a wonderful opportunity for our high school students to make a difference,” Lestina said. “Knowing that not everything needs to go to the landfill is an important lesson and I think [students] can take that into their everyday lives as well.”