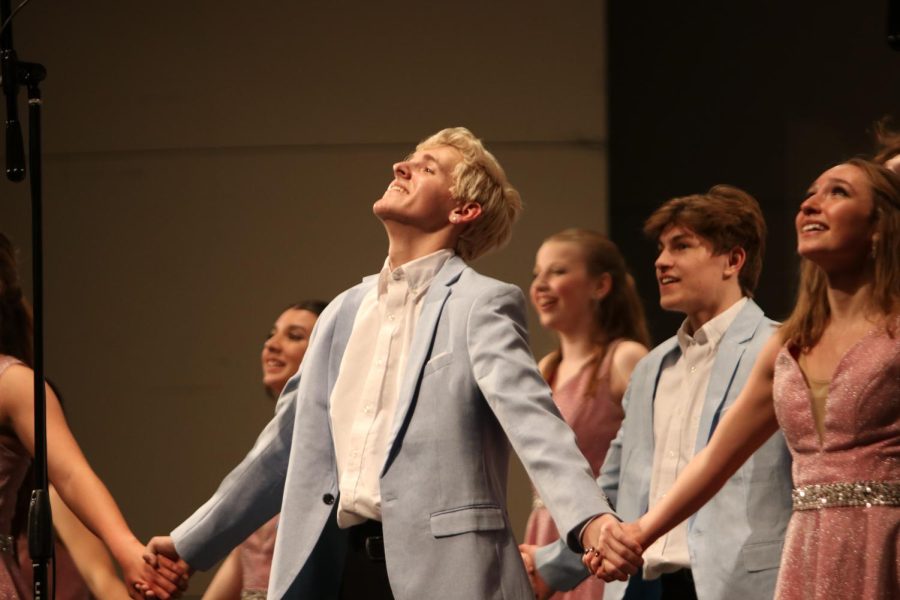 The bright lights inside Opstad Auditorium dim. Slowly, the chatter of the crowd fades away. The combo band finishes playing its last tuning note. Taking a breath, Ryan Brentner ‘23 walks onstage with the rest of the Fourth Avenue Show Choir to perform their show titled ‘Enchanted’ for the very last time.

“I think it was great and I think everybody was super impressed by how far we’ve come and how much we’ve improved,” Brentner said.

For Brentner and other members of the show choir at City High, the spring show marked the end of a very long journey through the show choir season. Avery Provorse ‘24 is also a member of the Fourth Ave show choir. She thinks that the end of the season marks the end of something special for everyone who was involved with the group.

“I feel like I’ve grown an incredible amount, especially [in terms of my] friendships. I was online last year, and starting this year, [being in Fourth Ave] was such a big thing for me. Everybody’s so positive. We get along so well, like family,” Provorse said. “I think not a single person didn’t enjoy some part of this year.”

Tyler Hagy, the director of Fourth Ave, was very pleased with the performance as a whole and feels that the final performance was a culmination of the hard work put in by the groups throughout the year.

“On the one hand, it feels good to finally put that show to rest at the end of the season, but it’s also certainly very sad to know for seniors that it might be their last time performing in something like this,” Hagy said.

Provorse is also sad to see the seniors leave the group after the leadership and guidance that they have offered other show choir members throughout the years.

“It was kind of bittersweet. I was happy and sad at the same time, because [the seniors] are going to move on to better and amazing things, and we want what’s best for them,” Provorse said. “Hopefully, they come back, but it was definitely sad to see them go after helping us so much.”

Hagy feels like he has a special connection with this class of seniors because he started teaching at City High the year they were freshmen, which he says makes it particularly hard to see them go.

“To watch them grow and develop over the course of the last four years, even in the midst of the pandemic and everything else, and to emerge triumphantly on the other end of it has been really exciting to see,” Hagy said.

Looking forward to next year, Brentner is excited to take on a more prominent leadership position and be a role model to younger students as she moves into her senior year.

“I’m excited to build more relationships with people. Obviously, I’m hoping that we can get to the same point that we did this year as a show choir, like how connected we were, I just want that for anybody new coming in,” Brentner said. “I want our show choir to be like that always, not just because of who was here this year, but because we want that to be the norm.”

After losing many seniors this year, Hagy hopes to continue to spark interest in the group so that there can be a quick turnaround and so the show choir groups can continue to grow.

“I’m certainly looking forward to having a hopefully more normal season. We felt the effects certainly this year, of not having a normal show choir season last school year,” Hagy said. “Having more students that have had the experience of competitions will help us immensely moving forward to bridge that gap in experience.”