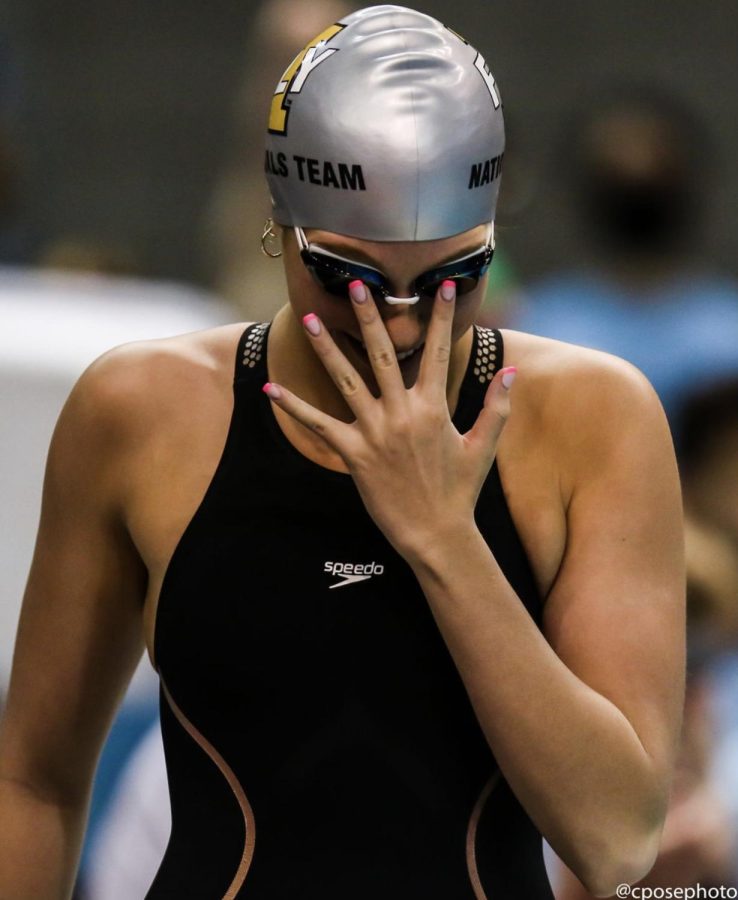 Diving into the water, Heidi Stalkfleet ‘22 swam lap after lap.  At the age of eight years old, she began participating in tough competitions, becoming accustomed to the twice-daily practices. Eventually these practices became routine, a normal part of her everyday life. However at some point she would have to make a decision, a decision that could make or break her future, what college she would attend to continue swimming

“[The pressure] is kind of indescribable if you haven’t [already] gone through [the college selection process]. It’s really hard to describe how stressful and how much pressure it is,” Heidi Stalkfleet ‘22 said. “And no one wants to transfer, you want to make the right decision [the first time].”

According to Swimcloud, Stalkfleet ‘22 is the second ranked Women’s swimmer among current high school seniors in the state of Iowa. During the 2022 IASI Short Course Championships Stalkfleet came away with multiple first places. Stalkfleet started the college recruiting process during junior year and had made her decision to go to Georgia by winter of that year. Almost two years before she will first step on campus to go to college in the fall of 2022 to swim with four time Olympic coach Jack Bauerle. Coach Bauerle has seen 87 of his swimmers from the University of Georgia participate in Olympic Games. According to the NCSA power rankings, Georgia is currently ranked as the 14th best Division 1 college for womens swimming.

“When you’re going through the recruiting process, there’s usually websites or teams that will post ‘2022 recruit plus one’ or, they’ll post when someone commits and it would stress me out seeing [those] spots fill up on teams,” Stalkfleet ‘22 said. “There’s limited scholarship money. So that was adding more pressure. Just seeing people post that they had committed I was like, ‘Oh my gosh, I need to hurry up and make my decision.’”

The decision of what college to go to determines so much about an athlete’s future. It determines their coaches, teammates, and what resources they will have available to them during their time in college.

“In a sense your future is on the line, you have to decide where you want your future to be, is it going to work out? Stuff like that” Jacob Williamson ‘22 a member of the City High Football team said.

Jacob Williamson plays as a tight end and Defensive end for the City High football team which ended the season ranked 13th in the state of Iowa. He plans to continue to play at Central College starting in the fall of 2022.

“You have to keep up the performance that you showed [in the past] season, all the work you’ve put in and you have to keep improving,” Williamson ‘22 said. “That definitely increases pressure.”

One of the reasons for this pressure is that athletes feel they need to make an impact on the team that they have been recruited to.

“[After the decision] I feel more pressure to keep up with my times and keep swimming fast, because when I get there, I want to make an impact on the team.” Stalkfleet ‘22 said. “I don’t want to just say I swam at Georgia, I want to say that I helped Georgia win a national title. So I definitely think all the work that you do to get there is more just saying that you achieved this huge goal and then after you commit, it’s more like showing them why they recruited you.”

This internal pressure of wanting to show why they are recruited is one of the main pressures athletes face.

“A lot of the pressure that I have on myself is from myself,” Stalkfleet ‘22 said. “I have really high expectations.”

High expectations can be frustrating for high performance athletes while a team is going through a transition period. The City High Football team ended their 2020-21 and 2019-20 seasons with records of 2-4 and 2-7 respectively. However in the 2021-22 season the work paid off, and the team finished with a record of 10-2 ending their season in the 5A State Semifinals against Southeast Polk.

“I would say junior year was really tough because not only me, but a bunch of other guys feel like we put in a ton of work and effort and we just weren’t seeing any results.” Williamson ‘22 said. “It got really frustrating for me. And it made me doubt myself a lot. ‘Hey, am I doing the right thing, am I gonna end up making the right decision?’ And then once senior year happened, I was just blessed to be able to get a bunch of offers from schools.”

Having people to help in their lives is important for athletes, especially since, “The professional consensus is that the incidence of anxiety and depression among scholastic athletes has increased over the past 10 to 15 years” Marshall Mintz, a New Jersey–based sports psychologist said in an article for the magazine The Atlantic

However, there are also advantages for all students to participate in sports at school. An article published by the National Federation of State High School Associations (NFHS) cited advantages of playing in high school sports such as 1) a stronger sense of self-confidence in building relationships with others and having an expanded capacity for empathy; 2) developing a better understanding of self and in so doing understanding how their actions affect others; and 3) building foundations for lifelong fitness habits.

Even with these advantages to playing sports both scholarship and non-scholarship athletes are affected by pressure to perform.

“There’s the pressure to contribute to your team and provide something of value. A lot of times this feels like it has to be in the form of some sort of direct contribution to the outcome, like ‘I scored a certain number of points or I swam so fast and got X’,” Aubrette Kinne, a psychologist at the University of Iowa said. “There’s a lot of different ways to provide value to a team, but I think it often gets this tunnel vision. Like you’ve got to win or You’ve got to contribute to the win directly. And that’s not the case, everybody on the team contributes to what a team does”

“I think some of our sports teams do a really good job of [showing] everybody’s part of the family. Everybody’s traveling to this cross country meet, having people feel valued and appreciated. And I think that’s really important,” City High swim coach Mandi Kowal said.

“What’s more important [than winning] is to focus on are they enjoying themselves? Are they having fun? Most likely you’re going to get the best performance that way anyway,” Kinne said. “But also what are you learning? How are you growing? What are you learning about yourself as a person as an athlete as a competitor? What are you gaining from the sport? You know, those are the life lessons that are going to be important long beyond when the athlete retires, whether it’s after high school, after college, after the Olympics, whatever it might be.”

Besides focusing on the joys of sports and the life lessons you can learn, there are other tools that can help student athletes deal with mental pressures. Creating a balance between sports and downtime is a tool that allows athletes to focus on other aspects of their life.

Outside of soccer, Aaron Rutherford ‘22, captain of the varsity City High boys soccer team, is also a member of the City High Concert Choir and 4th Avenue Show Choir.

“Soccer is not everything for me,” Rutherford ‘22 said. “So even though somebody might say something about a game [I didn’t play well in], it’s like, oh, yeah, I didn’t play great. But now I’m a student, or, now I’m in choir. So now I’m focused on singing or I’m focusing on learning this new concept. So I think there’s just different aspects [of life] and I think a lot of us are able to just do the thing that you’re supposed to do at that time.”

“I think I’m able to separate my soccer life from my other life,” Rutherford ‘22 said. “I don’t think if I had a bad game, that I become a bad person.”

Coach Kowal agrees with Aaron’s perspective: “Sometimes I hear individuals get really frustrated, you know, at races or something doesn’t happen and [at the end of the day] it’s [just] high school [sports]. We’re not fighting cancer, this is a sport. We want to learn skills and [how to] work together.”

Another tool that helps athletes deal with pressure is to openly discuss their situation with teammates.

“It’s so great when athletes can talk to each other and realize they’re not the only one struggling with [pressure]. It’s probably a lot more common than people realize, including athletes. There’s a lot of times when our athletes sit here and feel like they’re the only ones going through it and I’m like you’re not the only one today that I talked to let alone at all, and I wish more people knew that so they didn’t feel so alone in their struggles,” Kinne said.

And students find support from many sources.

“In the moment it feels like it’s the worst thing you could be going through, but it does get better, and using most people around you like your teammates, your coaches, your friends, your parents, even your teachers can be really helpful,” Williamson ‘22 said. “Just staying grounded and understanding that if you just put your best performance out there and you try your best at that moment in time.”

In addition, at City High there already is a program to help students who are having difficulty with this balance. The NESTT (Navigating Emotions and Stress Through Training) was founded by City High staff members Doug Lestina, Amy Kahle, Thos Trefz, and Mary Peterson to promote student mental health. It is a space for students to go to get mental health help from trained professionals, whether that be immediate help or as a resource in finding adequate long term assistance. Another option is for students to just talk to their guidance counselor.

In a statement from the NFHS about sportsmanship, by Dr. Karissa Niehoff. Neihoff says “sports are meant to lift people up, not tear people down”