The Little Hawk Journalism team won the NSPA Online Pacemaker and their newspaper placed 3rd at the JEA/NSPA national conference in Los Angeles. The team also won nine journalism state championships and is an All-Iowa News Team of the Year Finalist. 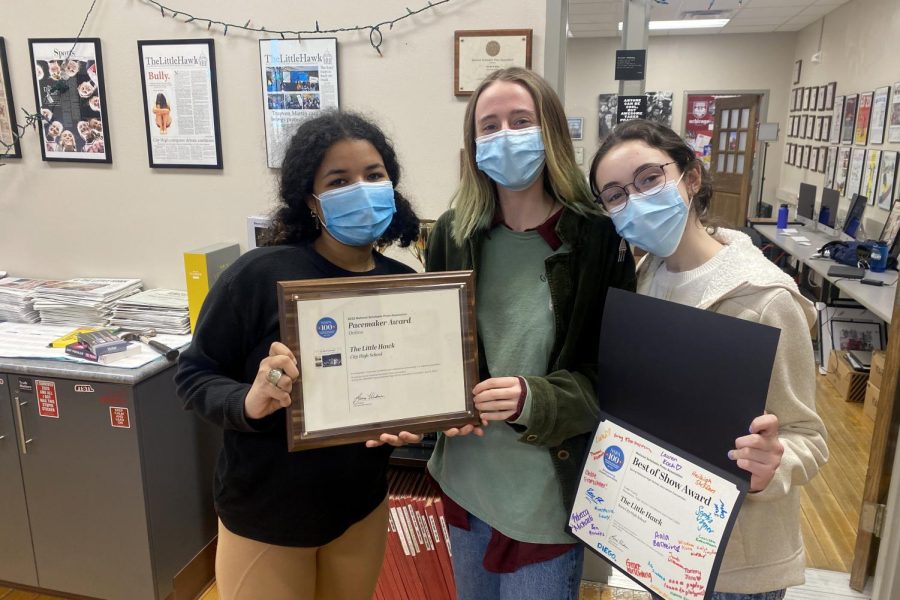 Little Hawk journalists traveled to Los Angeles to attend the JEA/NSPA national convention.  At the convention, they won third place Best of Show for their newspaper and the NSPA Pacemaker award for their website.  Only 20 schools in the country were honored with the Pacemaker and The Little Hawk was the only school in Iowa to receive the award.

“The Pacemaker is the association’s preeminent award,” Executive Director Laura Widmer said. “NSPA is honored to recognize the best of the best.”

Students of the Little Hawk journalism program were challenged to “rock the web” this year and push more creative content like podcasts. The award means more than what it represents, it means recognition of years of hard work and consistency.

“I think it means a lot. It’s incredible that we won the actual physical award, it’s always nice to have documentation of the work we’ve been doing, but I think it represents something more than that. I think it’s an acknowledgment of all the work that we have done over the past year, two years, especially throughout the pandemic. It’s a satisfying, validating thing,” Rebecca Michaeli ’22, Website Executive Editor said.

Michaeli led a staff of over fifty journalists throughout the year.  The staff updated the News, Sports, A&E, Culture, Multimedia and Feature sections on a weekly basis.

“This award is the culmination of six months of really outstanding journalism by this year’s team.  Rebecca was an outstanding leader who made good stories even better, while pushing really fun content like the podcasts.  To win the Pacemaker is really something special and then to also have them place 3rd for the newspaper is outstanding.  To have one of the best journalism websites and newspapers is quite an achievement.   I also want to give some praise to Anna Gayley the yearbook editor and all the photographers.  Photos really make the website pop and the photos by Anna and Lauren Koch were simply outstanding.  This is really shown in all the Iowa High School Press Association state awards they also just won,” Jonathan Rogers, adviser of the Little Hawk, said.

On the state level, The Little Hawk was also just awarded nine “state champion” or first-place awards and is an Iowa News Team of the Year finalist.  The Little Hawk’s state awards are listed below.

Wisdom Konu – Why We Talk about Bruno – Review