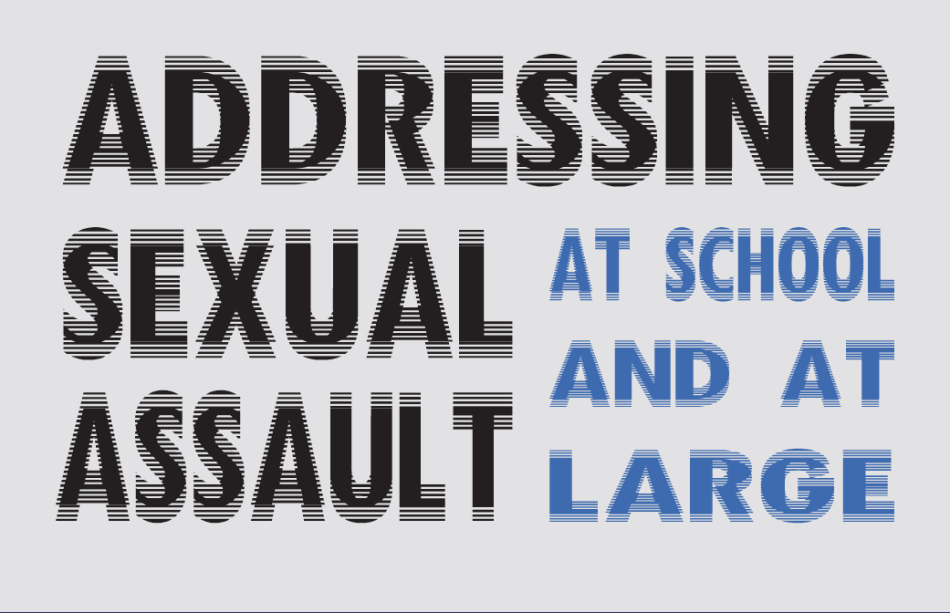 At School and at Large

In the last few months, the sexual assault debate has hit the Iowa City community after the University of Iowa police reported eight sexual abuse warnings on or near campus.  Up from two during the same time the previous years. The issue became even more heated when University of Iowa President Sally Mason made controversial comments regarding whether completely stopping sexual assault was a “realistic goal”.

In response, protesters have been speaking up. 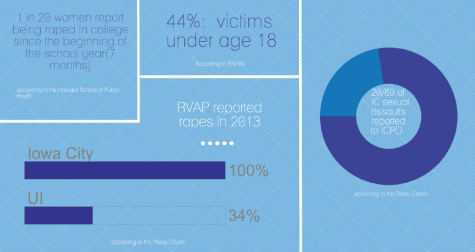 “We are referring to [Mason’s] quote as the catalyst, but it’s important to know that the organizing of the movement had started prior to that…we thought the comment was reflective of how the University hasn’t reacted historically and presently to sexual assault on our campus,” Stacia Scott, protest coordinator, said.

Elizabeth Rook, founder of www.notinmynature.com, and Scott work with students and community members, such as County Attorney candidate John Zimmerman, to host meetings, rallies, and protests to gain student support and to keep pressure on the UI administration to handle sexual assault more effectively.

The University of Iowa did respond in March with changes to their sexual assault policies and handling strategies.

Mason has now established her Six Point plan which includes: crack down on offenders, increase support for survivors, improve prevention and education, improve communication, add funding, and listen more and report back. The three primary goals of the plan are to prevent sexual assault from happening, to ensure that victim survivors have the support and the accommodations that they need so they know their resources, and to hold those who are accused accountable through a fair process.

“With [Mason’s] Six-Point plan, I think it’s great there will be more funding, resources and support for victims and more punishment for the perpetrator, but I think it’s unrealistic for people in the community to think that the University can ever take measures to stop it completely,” future University of Iowa student Emma Greimann said. “That’s not within their power.”

“I think in the president’s Six-Point plan, she made a commitment to update the community, including the regents, on the Six-Point plan. And she [communicates] now by providing progress updates to her website – http://president.uiowa.edu,” DiCarlo said.

Regents had professed a concern of a lack of communication between Mason and the Regents after Mason’s controversial comments.

Rook created a student coalition partially through her website at notinmynature.com to raise student awareness and support of combating sexual assault. There are resources for victim support, statistics, and preventing and helping the cause.

Scott has created a Facebook page that includes over 550 community members, alumni, and students as they discuss rape culture at the U of Iowa. She also began a message conversation about the topic, initially inviting only 20 people. By the end of the conversation, almost 80 people had joined.

“This just shows how many people are interested in organizing and making changes on our campus to eradicate sexual assault,” Scott said.

To integrate the plan into campus, a student advisory group that would meet regularly with the President and Senior Staff is being assembled as part of the listening more and reporting back step.

“There’s a committee that met to review the 175 applications [for the committee],” DiCarlo said. “The plan is to have that group meet at least once before the end of the academic year.”
Also included within the Six-Point plan is a new online product, Every Choice, that uses specific methods and techniques for education by introducing situations of social norming, and scenario-based skill building, with its primary focus on bystander intervention. In November of 2013, a committee reviewed four new online products on the market, and on December 20th of the same year, the committee recommended that the UI transition to Every Choice.
Every Choice will be installed in the fall of 2014, and it will replace Nformd, the UI’s current online training tool.
“[Every Choice] also helps [the University] meet compliance requirements for prevention education that are in place with the federal government, and aligns with our priorities for campus education,” DiCarlo said. “I think it’s especially helpful because it uses real life scenarios and storytelling.”

Scott and Rook advocate for a plan that takes the crime through all its stages, a plan the UI has recently adopted through this Six-Point plan. Though they are pleased with the utilization of a second Nite Ride, Scott and Rook believe only teaching the victims on how to avoid sexual assault is part of the problem.

“We’ve found that a lot of organizations that take on a multi-tiered approach for both assault prevention education, and having harsh consequences for perpetrators and strong support for survivors are more effective at countering rape culture than if they were to only provide information on how to avoid sexual assault,” Scott said.

It is also unclear if there is a large increase of sexual assaults at the University of Iowa, or just an increase in reported sexual violations.

Sexual assault statistics are often inaccurate because of the lack of reported assaults to the ICPD, however UI sexual assaults are required to be reported to RVAP, which characteristically shows more cases of sexual assault. The Jeanne Clery Act, which took effect in 1991, requires colleges and universities to communicate their security policies, keep a public crime log, publish an annual crime report, and provide timely warnings to students and campus employees about a crime posing any threat to students and campus employees.

Scott and Rook took issue with the timely warning section of the act, citing the language, now changed through the Six-Point plan.

“The way in which they were worded was focused solely on the victim and what the victim could do to avoid being raped in the future,” Scott said. “There was a lack of information about support services, sanctions for perpetrators, and prevention education opportunities.”

Students at the UI campus in mid-February 2014, received two of these emails in one week, inspiring outrage.

“Timely warnings have changed significantly due to the feedback from the Listening Session [held on February 27th]…if you look at an earlier timely warning and compare it to one that’s been sent out recently, you’ll be able to see those changes,” Dodge said.

To continue to give the University input, Rook also advertises Moral Mondays on her site, an educational rally which meets in the Pentacrest and drops letters at UI administrators’ offices every two minutes during the lunch hour to commemorate the span of time between each sexual assault in America. In the blog portion of the site, a “Story Project”, an event that may be hosted at the end of the year, invites UI students to share their story of sexual violation.

“Students can write anything they feel helps to take rape culture out of the extreme and bring it down to everyday experiences of people on our campus,” Scott said. 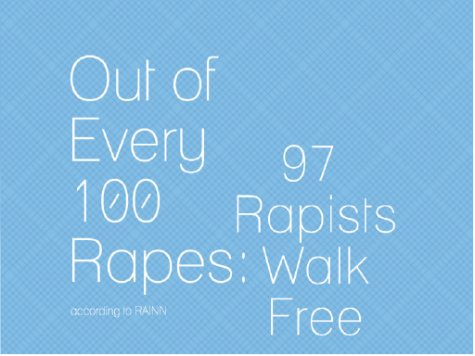 Contributing to the multifaceted approach, the University and surrounding areas have organizations which deal with victim survivors of sexual assault, and the entire recovery process. These organizations include WRAC (Women’s Resource and Action Center), RVAP (Rape Victim Advocacy Program), Office of the Ombudsperson, University Counseling Service, OSMRC (Office of the Sexual Misconduct Response Coordinator) and DVIP (Domestic Violence Intervention Program).

“We do think this is an effective measure at prevention on especially gender constructs, gender norms, and the existence of rape culture,” Scott said. “We really want to see [prevention education] increase, we want to see that be apart of the classroom experience, the campus experience, and to really see our students exposed to bystander intervention training.”

The main objective in implementing new and advanced ways of dealing with sexual assault is not out of sight at the University of Iowa.

“Our primary goal in our response to sexual assault is to help prevent an incident from occurring and to ensure that victim survivors are safe and supported,” DiCarlo said. 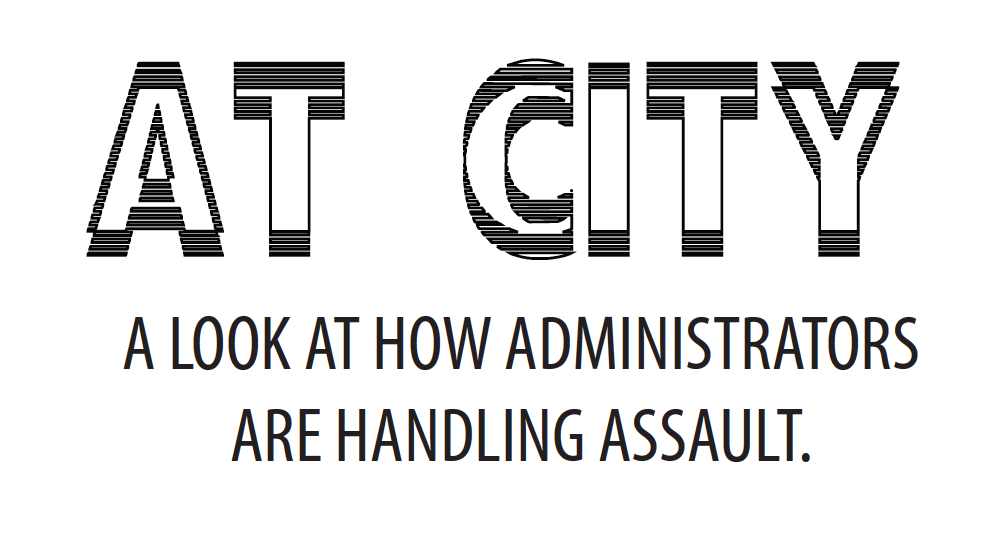 Although it seems that sexual assault is more prominent in the college level rather than high school, there have been countless cases of minors being assaulted, including students at City High.

“I think it would be, without question, one of the most serious possible offenses that could ever occur, it would be treated with the utmost care,” John Bacon, Principal, said of sexual assault happening at City High. “We would thoroughly investigate, make sure that we’ve provided every possible support that would be needed around a victim in a case like this. Any investigation like that would be taken very seriously.”

Although there has not been a case of sexual assault that happened on school grounds or at a school event, there have been cases in which students enrolled at City High had been sexually assaulted outside of school where the administration was involved.

“I have had students come to me who have been sexually assaulted, but not by other members from the building,” Wendy Jacobsen, Dean of Underclassmen, said. “The most recent was last year.”

In that case, a female student had been sexually assaulted by a member of the community and had reported the crime to Jacobsen.

“In that situation, we called the parents of the student, we called DHS because we’re mandatory reporters,” Jacobsen said. “And then we called the police.”
Because the perpetrator was not a City High student, most of the case was handled outside of school.

“School was kind of the place where the police interviewed the girl and it wasn’t handled here,” Jacobsen said. “Pieces of it were handled here, but that was mainly dealt with by the police.”
Sexual assault is considered a statutory offense in various jurisdictions.

“It’s a very serious issue, it’s not something that we as a school handle alone,” Jacobsen said. “The thing is, if a girl or a boy comes to us and reports that something happened, we have to report it. If a teacher were to hear something they typically would pass that along to myself, Mr. Bacon, Mrs. Dvorak or Mr. Jespersen.”

All high school faculty members are considered mandatory reporters. This means that if they know of a student that is being harmed in any way, they must report it to either the Department of Human Services, the police, and/or parents.
“If a student comes to me and says ‘I wanna tell you something’ a lot of times I will say, ‘If you tell me that someone has hurt you, or that you are hurting yourself, I have to report it,” Jacobsen said. “There’s no secret keeping between staff and students.”

In a case where the perpetrator attends City High, consequences would include suspension up to expulsion. Law enforcement would be involved as well.
“I would say that if something had occurred outside of school, that the legal system would be involved and consequences would be such for a perpetrator that would not have the option of returning to school because of whether they’d be incarcerated or in a juvenile detention center,” Bacon said. “Those consequences are obviously most severe.”

Bacon feels that sexual assault awareness has improved in the past few years.

“I think awareness about this issue is positive, I know that there were recent demonstrations and much discussion at the University of Iowa along these lines,” Bacon said. “And that any case of sexual assault or sexual abuse, the victims I hope would always feel comfortable with coming forward and speaking up.”