From Paris to Iowa City: The Climate Crunch

The international community agreed on steps to reduce greenhouse gas emissions in this year's UN Climate Change Conference. The same discussion is playing out around the globe as local communities attempt to fight climate change on a smaller scale. 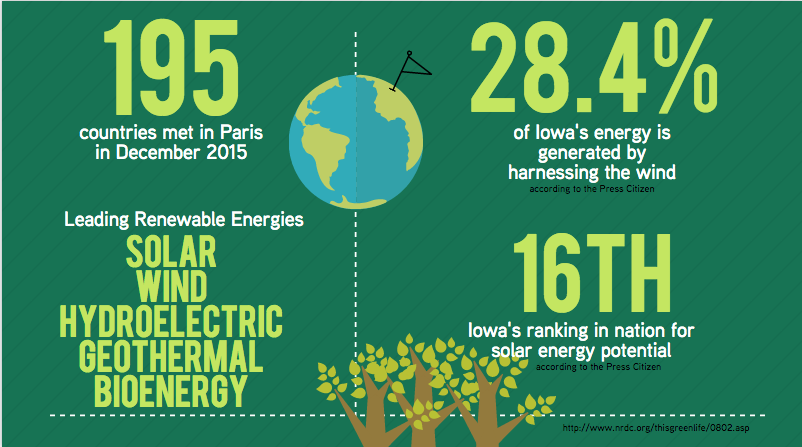 The United Nations Climate Change Conference closed on December 12th, but the global fight against climate change is only beginning. Although the conference resulted in a landmark agreement in which 195 countries agreed to lower their greenhouse gas emissions, this effort alone will not be enough to prevent the catastrophic increase in global temperatures climate scientists have predicted will occur if we fail to reduce our consumption of fossil fuels. The success of the UN initiative hinges on whether smaller communities and individuals can expand on the global progress made at the Conference.

“I think [the UN Conference] will make a difference because it at least provides momentum, and it can set an example for other countries to improve their environmental regulations,” Liza Casella ‘16 said.

Casella, along with other City High students, has been volunteering with NextGen Climate, a nation-wide organization that works to identify “climaction voters,”– voters who promise to make climate change a priority issue when considering which candidates to support.

The organization’s hope is that by collecting and distributing information on the importance voters attach to addressing climate change, they will be able to convince candidates that this issue deserves their attention.

“I’ve also been involved with the Bernie campaign, and I thought it would be interesting to get involved with a specific issue and just try something new,” Laura Cornell ‘16, who also volunteers for NextGen, said. “I think it’s really important and I’ve learned a lot.”

NextGen is a nonpartisan organization, meaning it aims to pressure candidates on both sides to address the issue. Cornell is part of the organization’s effort to reach voters through high school volunteers who make calls to voters on Sunday, Tuesday, and Thursday evenings.

The organization’s main goal is for the United States to be powered with 50% clean energy by 2030.

“At this point, we really need to try to fix our environment,” Casella said. “Global warming is very real, and in this coming presidential election more than half of the potential candidates don’t even believe it exists, which makes it very imperative that we spread awareness.”

The issue of climate change has recently come to the forefront of ICCSD school board discussions in the form of a debate over solar panels.

There is a lot of support for a more solar-based ICCSD. The district would receive massive tax rebates for going solar because of the bulk of product necessary. This solar photovoltaic technology works by converting energy from sunlight into electricity using solar panels. This energy would be fed back into the grid, tracked by a meter which measures energy.

However there is a debate over whether it’s legal for the ICCSD, or any school district, to arrange business agreements with a private entity. Iowa’s Dillon’s rule states that school districts have to abide by laws made by the state. This is different from the functioning of cities and counties which abide by Home rule and have more individual power. There have been discussions about locations for a demonstration solar project in the future.

The ICCSD has already taken district-wide measures in order to contribute to a solution for the issue by working to increase energy efficiency within the district. In 2013 the district began to implement a 10-year plan, with efficiency in mind, that will touch every building in the district.

The $250 million dollar plan includes a new high school, three new elementary schools, and renovations to existing buildings. So far the district has started construction on Liberty High School, completed Alexander Elementary, and renovated Penn, Twain, Van Allen, Hills, Hoover Elementary Schools. Duane VanHemert, who became the Director of the Physical Plant for the ICCSD in 2012, was drawn to the ICCSD because of the new construction happening here.

“Most of the new technologies we’re using are just old ones regenerated,” VanHemert said. “The real story is how farmers back in the 1800s used things like wind breaks, and wind mills, and south-facing windows.”

VanHemert has worked to implement geothermal heating and cooling systems into every building. This technology can reduce energy costs by as much as 60%, proving to be a viable method of energy conservation. Wells in the ground circulate glycol-fluid which picks up heat in winter–heat pump collects heat in fluid–and extracts heat from the building in summer, depositing it back into the earth.

These systems operate underground, and arguably have the biggest impact when conserving energy. Although costs are high upfront, they pay for themselves within five to seven years of installment. City’s new addition, third floor, and performing arts wing are already heated and cooled by geothermal systems.

“I think we are making [the buildings] more eco-friendly,” he said.

The district has also implemented bioswales, slopes incorporated in the landscape designed to remove silt and pollution from surface runoff water, retention ponds, which hold rain for flood control, plantings to absorb stormwater, and permease concrete, porous concrete that allows water to sink into instead of skirting over the ground.

Students in the district can make a difference by being aware of the energy needed to run the district. VanHemert sites making sure lights are turned off, continuing with recycling programs, and cutting down on paper usage as key things students can help with.

“I think the younger generation does a good job with awareness of things like utilities, and cutting down on lights, and using your electronic devices,” VanHemert said.