For Martin Luna ‘17, life has been nothing but hospitals, surgeries, and cancer. But through it all, he keeps a positive perspective that everyone knows him for. 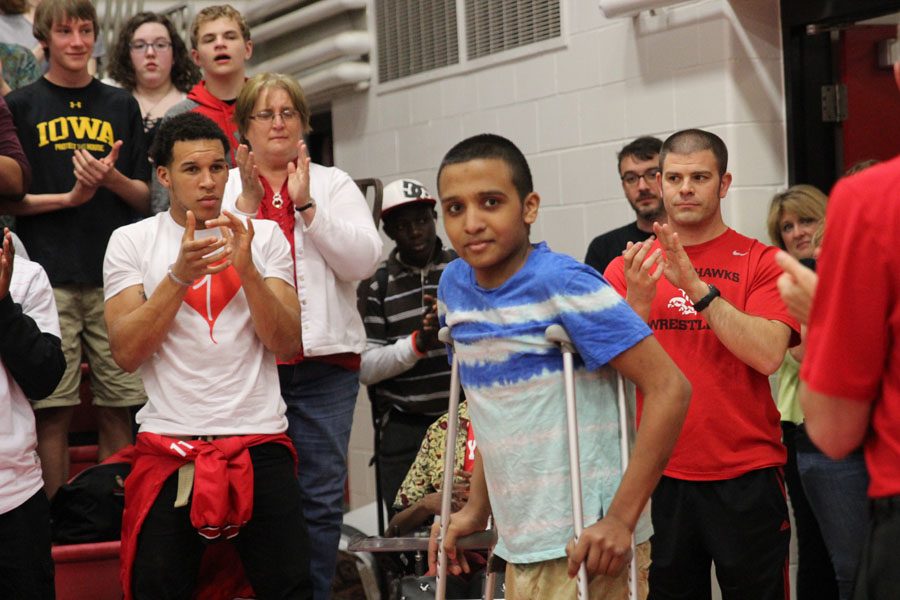 Martin Luna ’17 walks into the spring pep assembly as everyone cheered for him.

Ever since he was a 2 year old boy, Martin Luna ‘17 has been in and out of the hospital enduring surgeries, tumors, and cancer. He battles through it all despite his emotions on why this happened to him.“It’s damaging my organs and it can go back to my spine. It makes me tired, weak, loss of appetite, and pale,” Luna said. “I was sad and confused and I thought ‘why did this happen to me at such a young age.’”

Recently, Luna has been in and out of the hospital more frequently as his cancer has grown and become more severe. He has gone through multiple treatment options like radiation, chemotherapy, and surgeries. As of now, treatment options are limited and Luna cannot do much else to treat his situation, nor does he know how long he may have.

On June 15th, 2014 Luna was diagnosed with a disease called NF1, also known as Neurofibromatosis Type 1. This particular illness causes  the cancerous Malignant Peripheral Sheath Tumor which grows in the cells surrounding peripheral nerves. As his tumors grow, his doctors ordered him to eat a limited amount of food based on his condition with his cancer.

“No, I can’t eat anything but I chose only to eat junk food on Saturdays,” Luna said.

Through everything Luna endures, he chooses to look on the bright side of things. Enjoying his friends, family, and himself as he continues moving forward day by day even if he cannot be in school. He spends his days at home hanging with family, fishing and playing games such as Madden 16, Call Of Duty, and Grand Theft Auto 5.

“I have been doing well with everything, I’m just trying not to think of the situation. Having friends over and my family really helps me not think about it.” Luna said. “Life at home is good, and it’s better than being in the hospital.”

Martin has been supported by numerous people in numerous ways. He is grateful for everything everyone has done to assist him and his family.

“I have been supported by a Gofundme page created by head football coach Dan Sabers. My cousin had a fundraiser for a BBQ,” Luna said. “There has been a lot of support and it’s been helping me and my family.”

Dan Sabers and the rest of the City High Football team have been a big help to Luna. He has been unable to play his favorite sport, football, for years now. Though starting this year he was able to be a part of the team as a manager.

“I loved being a part of the City High football team. Since I’m not able to play I might as well be a part of the team in a different way,” Luna said. “The thing I enjoyed the most was going to round 3 in the playoffs. But I have confidence that we will go all the way next year.”

During Martin’s dinner benefit, gathered by family, friends, and the football team, Coach Dan Sabers made an announcement that from now on every football season there will be an award given out to one player. The Martin Luna Award will be given for a player’s acts of courage, team sportsmanship, and positive attitude to reflect Luna’s outlook on the team and life.

The very last game of the season against Bettendorf, Luna wasn’t able to make the game as he was in Boston to see Rob Gronkowski, Tom Brady, and the rest of the Patriots NFL team. He was surprised by some of the coaches and his family when they arrived with posters, balloons, and a sign that read “Martin, you’re going to meet Rob Gronkowski.” The Make A Wish Foundation was able to sponsor Luna’s trip.

“It was really fun. It’s something I will never forget and It was one of the best days of my life. The players were all really nice and funny,” Luna said. “I think going to the game was the best part because it was my very first NFL game and I saw my favorite team.”

Luna made many memories during his trip to Boston to see The Patriots, but through all he is going through he has many more important and memorable memories he will never forget.

“I’ll always remember my family coming to visit me while in the hospital,” Martin said.

Martin keeps pushing forward without looking back with his help of friends and family. He tries his best to keep his head up high and stay positive no matter what the outcomes may be.

“I just try not to think about my situation and focus on the better things in life,” Martin said.