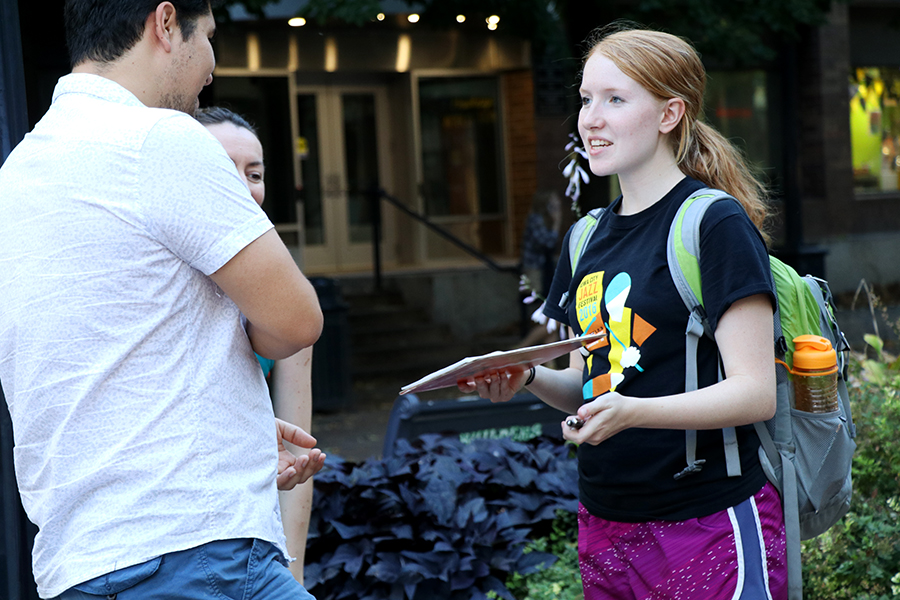 Iowans of the second congressional district will see two of its Congress members up for reelection this November: Senator Chuck Grassley and Congressman Dave Loebsack. In the foreground of the election, however, is the presidential race, which is continually-shifting.

In the four day GOTV (get out the vote) period leading up to the November 8th election, Riley Lewers ‘16 will prioritize work over sleep and school.  Lewers’ objective during these days will be to push her preferred presidential candidate, Hillary Clinton, and the Democrats further down the ballot, towards victory in Iowa.

“I’m trying to get more involved,” Lewers said. “I see getting more involved, rather than dissociating yourself, as a better way to fix the issues in our country right now.”

Lewers first started working for the Hillary Clinton campaign last fall, prior to the Iowa caucuses.  Then, the work was informal; Lewers would stop by the office when she could to make phone calls or go door-to-door, and gage the level of interest of potential voters.  This summer, she upped her commitment by assuming the role of volunteer organizer for NextGen Climate, a nonpartisan political organization that works to elect politicians with clean energy policies.  Now, Lewers has yet again assumed a different role: she is a fellow for the Johnson County Democrats, and is held accountable for reaching quantified goals and working around 15 hours per week.

On November 8th, two incumbent Congress members from Iowa will go up for reelection: Senator Chuck Grassley and Congressman Dave Loebsack of Iowa’s second district.  The focus, however, is on the continually-shifting race between Hillary Clinton and Donald Trump, according to Lewers.

“When I’m clipboarding and making phone calls, it’s more about Hillary.  I think part of the thinking is presidential coattails, so if we can get Hillary elected then the chances of taking back the Senate are better,” she said.  “However,  I do actually think we could do more with [the Senate and Congressional races] as a campaign.”

Lewers also explains that, poll-wise, the presidential election is the closest right now, which, for her, merits more support for Hillary over other Democratic candidates.

“The [senatorial] race isn’t as close as we would want,” Lewers said.  “I think right now while the presidential race is so tight in Iowa, that’s our bigger focus.”

While Lewers is not paid for her work, she isn’t tempted by more lucrative jobs, at least until before the election winds down.

“I think that this election especially is really important,” Lewers said.  “I really don’t like Trump, and it’s really scary, because if Trump wins, that means that we’re going to have a Republican control of Congress, and he’ll be able to pick that crucial Supreme Court seat, so there really won’t be a check on what Congress can do and what Trump can do, and that’s really scary, to have four years of that.”

But her work does not come easily.  Lewers often encounters hostility and political dissociation firsthand when she is clipboarding–standing in a public area to engage voters by asking that they commit to vote for a certain candidate–around the University of Iowa campus.

“It can be a really demoralizing job because a lot of people don’t like Hillary Clinton,” Lewers said.  “Right now, things are really polarized and a lot of people don’t want to talk to you and they don’t want to be stopped on the street.  They are going about their lives and they walk fast; they don’t look friendly; they’re listening to music; but you have to go up to them anyways because every person you approach is one more chance that you’re going to get someone to say yes to you, and that’s really important.”

But Lewers can’t waver.  She must go against her instinct in order to meet the weekly goals set by strategists higher-up in the campaign.

“Basically, your instinct is to curl up and not approach people, but you can’t act like that,” Lewers said.

In campaigning, Lewers’ work is very calculated. She described the race as one against time, and, rather than spending time trying to win avid Trump or Grassley supporters over, she focuses on those who are undecided.

Government Teacher John Burkle agrees that, given the the larger gap in the senatorial race, it makes sense for the public to focus on the presidential race, and vote downward on the ballot accordingly.  However, he asserts that this is the closest that any opponent of incumbent Grassley has been in winning the election.

Recent polling supports this notion.  A RealClearPolitics average of several polls gives Grassley an 11 point edge over Judge, compared to his ultimate 30 point edge over opponent Roxanne Conlin in 2010.   Despite this, Grassley is still expected to win the reelection.

In the weeks leading to the election, Judge describes her strategy as aiming to energize prospective young voters.  In order to do this, she is focusing on issues close to home in regards to first-time voters.

“I’ve been talking a lot about education and about the high cost of a college education, and I really believe that we need to find some ways to make certain that future college graduates don’t take on the high debt that recent graduates have had to take on, because it makes it very difficult for them to enter the workforce,” Judge said during a visit to Iowa City on September 24th.

Judge advocates for the type of grassroots efforts that Lewers, and other young voters, are involved in.

“I think it’s critically important [that younger people are part of the political process],” Judge said.  “It’s important that people in high school get involved and understand what’s going on–in the state and nationally.”

However, even Lewers, a fellow for the Democrats, is skeptical about the state of the grassroots campaigns for the Senatorial election.

“I do actually think we could do more with [the Senate and Congressional races] as a campaign,” she said.

Ultimately, though, Burkle contends that having an edge in the Senate race is dependent upon which presidential candidate has the most support at the time of the election because of down-ballot voting, meaning one votes entirely for one party on a single ballot.  A recent FiveThirtyEight poll gives presidential candidates Clinton and Trump a 35 and 65 percent chance, respectively, of winning Iowa’s six electoral votes.  However, this poll has shown dramatic shifts in a matter of days.  In early September, the polling numbers were virtually switched, giving Clinton the upper hand.  Now, the numbers are in Trump’s favor.

“You can track down-ballot voting by whoever’s leading the presidential race, so that gives Grassley a bit of an edge [right now],” Burkle said.

One aspect of the Senate election that is vastly different from Grassley’s previous runs is his current role, as the head of the Senate Judiciary Committee, in blocking the Supreme Court nomination to fill the empty seat left by Justice Scalia.  However, Burkle doesn’t think this will be a defining aspect of the election.

“I don’t think it’s going to cause anything to happen because there are just as many Republicans on his side as Democrats who think that it’s wrong,” Burkle said.  “I think more people are upset outside of the state, but he doesn’t have to worry about them because they’re not voting for him.”

This issue is one that Jeffrey Toobin, a CNN Legal Analyst and New Yorker Columnist, knows a lot about.

“The question was, will the voters rise up out of outrage about [Grassley’s blocking of the Supreme Court nominee]?” Toobin asked in his hour-long Levitt Lecture at the University of Iowa Law School on September 15th.  “I think the answer to that is clearly no.”

In his lecture, Toobin compared the Supreme Court to the state of Iowa, given both of their swinging natures (the Supreme Court being at an ideological divide after the death of the ninth, and tie-breaking judge, and Iowa as a whole tending to swing ideologically from left to right). Although Toobin acknowledges the leverage that Judge has in pointing out Grassley’s blocking, he thinks that she could’ve done more with it.

“Judge has not used this issue effectively,” Toobin said.  “The people who care a lot about the Supreme Court are already strong partisans of one party or another.  The people that elections are aimed at are the swing voters that don’t take much care about it.”

However, ultimately, Toobin believes that the Supreme Court vacancy will not be filled until the next president is elected.