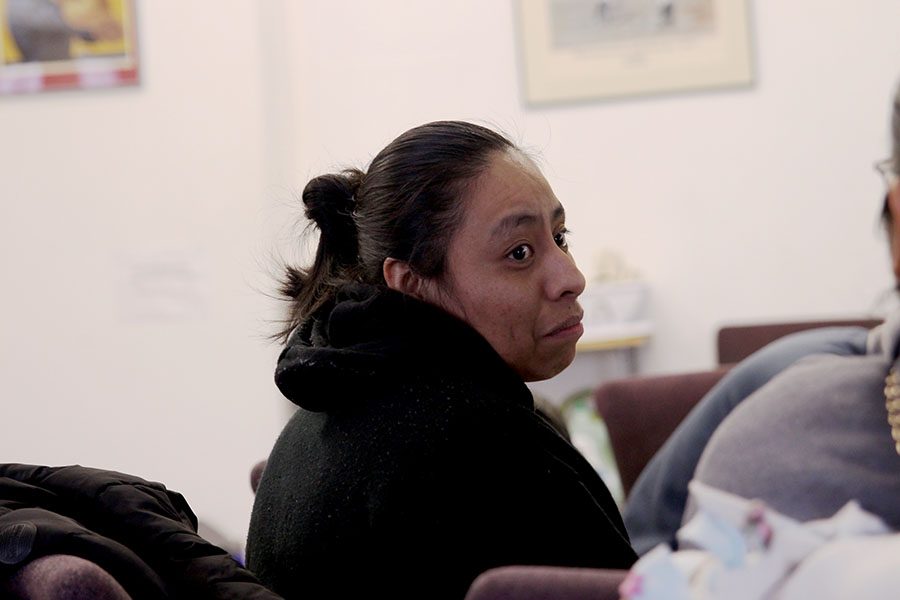 Elizabeth Bernal, who works for food service at City High, attends a meeting at the Center for Worker Justice of Eastern Iowa on February 4th. Bernal has been a proponent for immigrant rights, and advocated on behalf of Iowa City becoming a sanctuary city at a City Council meeting.

As the Trump Administration rolls out promised immigration regulations, the Iowa City community has reaffirmed and emphasized their own stance. The City Council has passed a resolution that clarifies the city’s current immigration policies, as requested by fearful members in the community.

“In light of public concerns, we are explicitly reaffirming that the focus of our law enforcement efforts will be on ensuring the safety of our residents and visitors, and that the city’s law enforcement resources will not be used for immigration enforcement except as necessary for public safety, or as otherwise required by state or federal law,” said Jim Throgmorton, Mayor of Iowa City, regarding the recent resolution.

The resolution, which was passed on January 3rd, ensured that Iowa City Police would leave immigration enforcement to federal forces, such as ICE (Immigration and Customs Enforcement). Eleanor Dilkes, city attorney, crafted the resolution.

“I think prior to the resolution and after the election, there was a lot of fear expressed to us by members of our community, and in turn there was a number of city statements released about Iowa City continuing to be a welcoming community to all,” said Dilkes.

Historically, Iowa City has left immigration law to the federal government. By passing the resolution, the council seeked to reaffirm this rule.

“Immigration enforcement and law is a federal matter, not a state or city matter,” Dilkes said. “The function of our police and other resources are to ensure safety.”

The heightened awareness of immigration issues traces back to the period after the presidential election, when groups of Iowa Citians requested a discussion regarding the possible adoption of a ‘sanctuary city’ title. The City Council voted to reject the label at the same council meeting on January 3rd. The term has come up many times following remarks by President Donald Trump. He threatened to pull federal funds from cities that have decided to label themselves as sanctuary cities as part of a heavily regulated immigration plan proposed during his campaign. Dilkes does not believe that his remarks factored into Iowa City’s decision to reject the title.

“I think that if there is any follow through on those remarks by the Trump Administration, they won’t direct any legislation directed at a city that’s labeled a sanctuary city,” said Dilkes. “They will define what actual policies or laws at the city level will result in some kind of federal consequence.”

Estefani Garcia-Rojas ‘17 is a Mexican-American student, and recently researched the sanctuary city topic for a class. She has concerns regarding President Trump’s comments and his speculated consequences for sanctuary cities.

Iowa City is, and will continue to be, a safe and welcoming city for all of its residents and visitors.”

“I think that the label would have made Iowa City a target for the Trump Administration, because if they don’t agree they could take things like federal funding away,” said Garcia-Rojas.

Though the term ‘sanctuary city’ bears no legal weight, cities such as Los Angeles and New York, who have generally inclusive immigration policies, have adopted the label. Although all these cities have decided to call themselves a ‘sanctuary city,’ the policies and regulations that support each decision varies. For this reason, Dilkes believes the term’s definition remains ambiguous.

“That’s just a local decision for every city to make for themselves,” Dilkes said. “I think you really have to focus on what the term means. So you don’t know, for instance, if you look at any of the [existing sanctuary] cities, and get a list of quotes saying sanctuary cities, you would have to go look at their policies and legislations of each of those cities.”

Elizabeth Bernal, a lunch lady at City High, spoke in favor of the label of a Sanctuary City at the January council meeting. She was motivated to speak her opinion in front of the City Council after sensing fear from fellow Hispanic members in the community after the election.

“The fear was all the time before [the election], too. But right now, after the election, the fear is more major,” Bernal said. “People started thinking, ‘okay now what do I do?’ They started freaking out. They don’t know what exactly will follow. I think the Wednesday after the election it was a bad day for everyone.”

“It means different things in different ways, depending on how you look at it,” Bernal said. “In a city, it’s taking care of other people who are in the dark. Sanctuary is being respectful to each other.”

Despite the council’s decision to reject the ‘sanctuary city’ label, Bernal is thankful that immigrant issues have been brought further into light.

“The city takes a position and lays it on the table. We are here. We live in this little town. [At the council meeting,] I said thank you for being here to put this on the table because we never have talked about it so now finally they touched on something we never had dreamed of, and something possible to see. I told them thank you for seeing me,” Bernal said.

However, not everyone was in favor of the discussion relating to inclusive immigration. ‘Priorities for Iowa’, a super PAC based out of Des Moines initiated robocalls in an effort to cultivate an opposition in Iowa City. The City Council received many phone calls and emails in opposition, however a large proportion came from people that do not live in Iowa City.

“There was a whole range in comments,” said Dilkes, regarding the opposing messages. “Some were respectful and just said ‘I don’t think we should be a sanctuary city’, or ‘we shouldn’t adopt sanctuary city policies’. Others were more harsh, and some threatening.”

Opponents of sanctuary city policies voiced concerns regarding their own safety. Through the most recent resolution, Throgmorton and the council sought to alleviate these concerns.

Some families are scared about it. They start thinking about moving or won’t say anything if they have any problems–they don’t want to call anybody. We try helping a lot of families to continue trusting the police. Whatever [the police] are doing right now in Iowa City, it’s okay. If everyone follows the rules, we are okay. I just think we need to be safe.”

In addition to the concerns of the non-immigrant families, Bernal also recognizes the fears that the undocumented families may have regarding the recent debate on immigration policies. By putting faith in the local police force, she believes that everyone’s safety will be preserved.

“Some families are scared about it. They start thinking about moving or won’t say anything if they have any problems–they don’t want to call anybody. We try helping a lot of families to continue trusting the police. Whatever [the police] are doing right now in Iowa City, it’s okay. If everyone follows the rules, we are okay. I just think we need to be safe,” Bernal said.

Despite the ongoing fears, the council affirms that it will continue to protect its immigrant population.

“We do not know what specifically the Trump administration will do in the form of executive orders or in the form of legislation coming out of congress. We will just have to monitor [Trump administration decisions] very carefully,” Throgmorton said. “I do know this: there’s a case law that indicates that if the new administration orders local law enforcement officials to help ICE arrest and deport undocumented residents, that would violate the 10th amendment of the constitution. There is no doubt what so ever that there would be a court case involving the executive order or legislation that was passed. We would be minors in that and we would object as well on legal grounds.”