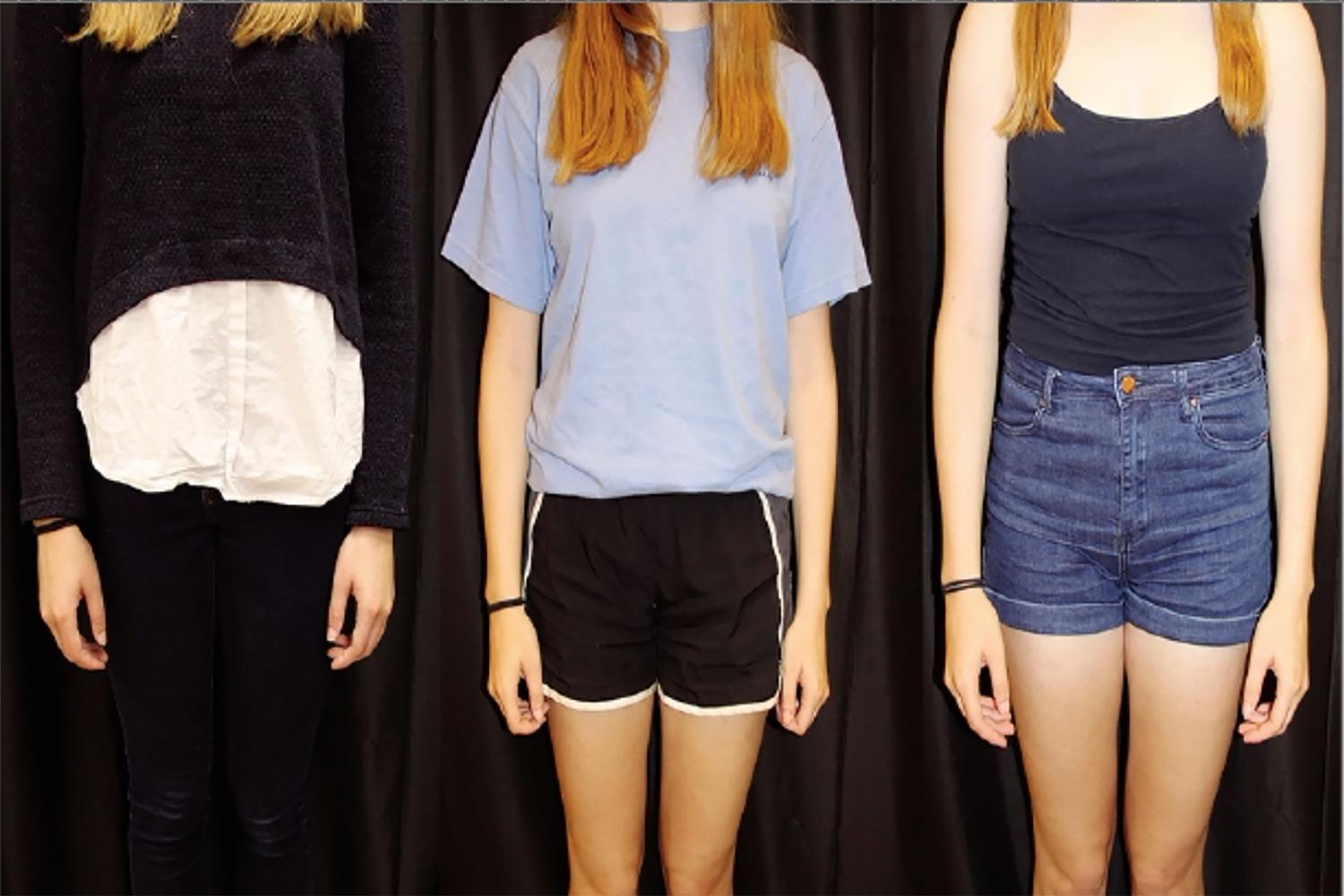 With dress code scandals creating controversies in school, students and teachers examine the current dress code and its effects.

Boys at San Benito High School in California showed up at school one day in off-the-shoulder shirts to protest their school’s sexist dress code. Dress code policies are a highly debated topic, with new stories and posts online about questionable decisions appearing almost every day. Seventeen put together a list of the Top 10 most outrageous dress code scandals, which included violations for spaghetti straps, knee length skirts, and even collarbones.

“I was dress coded once in junior high,” Audrey Friestad ‘18 said. “I went into math class first period and I was wearing a tank top with straps two inches thick. At the start of class, there was an announcement that said you can’t wear your tank top if the straps aren’t a certain width, and then my teacher called me out as well. I was allowed to wear the shirt for the rest of the day, but I was pretty upset. At City, I’ve worn clothing that possibly could have been dress coded but it’s never happened.”

Although many schools have strict dress codes, some schools are reconsidering their policies. A recent KWWL story described an Iowa teen who was recently dress coded for wearing an off the shoulder top. The Nevada High School teen said she wore the shirt because it made her feel confident, and that she didn’t know it was against the dress code. Instead of punishing her, the principal is considering revising the dress code. He wants each student to feel comfortable in their own skin and does not want a dress code policy to get in the way of student confidence.

According to the National Center for Education Statistics, in 2009, 19 percent of public schools require uniforms, and 60 percent of schools enforce a strict dress code. As for City’s current dress code, students and teachers agree it is fairly lenient. Many were not even aware there was a dress code, as it is not widely enforced.

“Our current dress code has certain extremes [showing too much skin, or having offensive words or images on shirts] that are enforced to try and make sure that students have appropriate dress,” Steve Dodge, an economics teacher said. “But other than that, students are given a lot of latitude in what they can wear to school.”

English teacher Anna Basile was not even aware of a specific dress code.

“I think the current dress code is fairly lenient and creates an environment where kids can show their individuality with what they wear,” Basile said. “I think that we’re certainly not as strict as other schools in the area.” 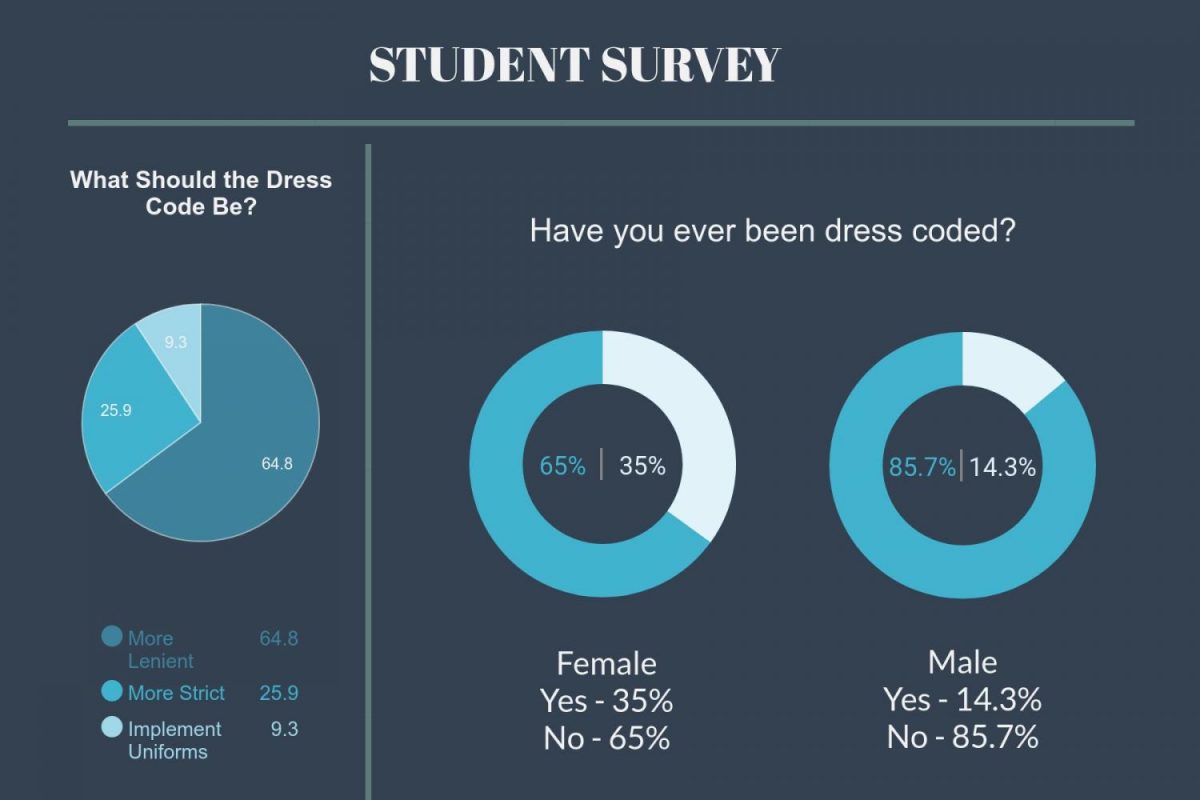 In many schools, uniforms are a popular alternative to creating a specific dress code.

“I’m on the fence between wanting the dress code to be more lenient, because it gives people the freedom to express themselves, or having uniforms so that people who don’t necessarily have enough money to buy new and trendy clothes are less worried,” Keyauna Miller ‘19 said.

Although uniforms seem to be a simple solution to dress code issues, they limit students’ freedom of expression.

“I certainly wouldn’t implement uniforms,” Basile said, “although I do see the value in some schools choosing to go that way. I think uniforms can be an interesting equalizer, certainly in the teaching field, there are a lot of studies that show the pros and cons of uniforms. I am all for expression, but there are some things that are not necessarily academically professional that people wear.”

Some people believe that a strict dress code can also create an environment in which students feel more self-conscious.

For Friestad, clothing should make one feel confident, but students should exercise good judgement.

“I feel like if people feel self-conscious about their body and what they’re wearing, they should be able to cover themselves up, and if they’re more confident, they should be able to show a little bit more,” Friestad said. “If I put on something that’s really risky, I’ll often feel really self conscious throughout the day and then I won’t end up wearing it. I just feel like you should just know where your limit is.”

For girls in particular, tank top straps and leggings continue to be a controversial topic.

“I think there is a certain point where you have to tell people what to wear and what not to wear. I think that people should be allowed to express themselves with clothing – yes, it can be distracting sometimes, but I don’t agree with teachers saying ‘girls can’t wear tight leggings because it’s distracting this guy and he can’t learn,’” Friestad said. “I think we should be able to wear whatever we want, and people should just use their own judgement.”

“Overly strict dress codes definitely fall more in the court of managing young women and what they wear. I think in a lot of ways that that is unfair, especially when a school tries to sell the idea that they’re trying to protect a distraction-free environment. I think that comes across as a little bit disingenuous, especially when we’re talking about things like leggings,” Basile said. “But I think there’s also that line, in that at school, we’re grooming students for their future. If that gets lost in the mix, and students think it would be appropriate to show up to work wearing whatever they might wear on Friday night, then we’ve kind of missed the mark, too. I certainly know that teachers, no matter what their bodies look like, don’t necessarily wear the same things that they would feel comfortable wearing on the weekend. We’re held to a different standard because we are working professionals, but I think that conversation can’t be overlooked, the importance of that kind of training, too.”

I think there is a certain point where you have to tell people what to wear and what not to wear. I think that people should be allowed to express themselves with clothing – yes, it can be distracting sometimes, but I don’t agree with teachers saying ‘girls can’t wear tight leggings because it’s distracting this guy and he can’t learn,’”

Dodge agrees that from a teacher’s perspective, a stricter dress code would help students realize how they should portray themselves in a professional environment.

“I think it’s important for students to express themselves and be able to choose proper attire for their location, whether it be work or school, and that we can help them make good choices,” Dodge said. “If someone is making bad choices, it is the faculty’s responsibility to talk to students so that they realize that in a professional setting like a school or workplace, they should be thinking about dressing a little more formally than they might in the summer with their friends.”

However, despite the current lenient dress code, teachers have never found clothing to be a distraction to the learning environment in their classroom.

“I’ve had some situations where I can’t believe people would wear a certain outfit to class,” Dodge said. “I’m glad that I can always see what my own kids are wearing to school, because in some instances, I wonder how students have gotten out of the house in what they wear.”

“I’ve never known a dress code violation to be an urgent distraction in my classroom,” Basile said. “Distractions happen for a lot of other reasons than what students have on.”