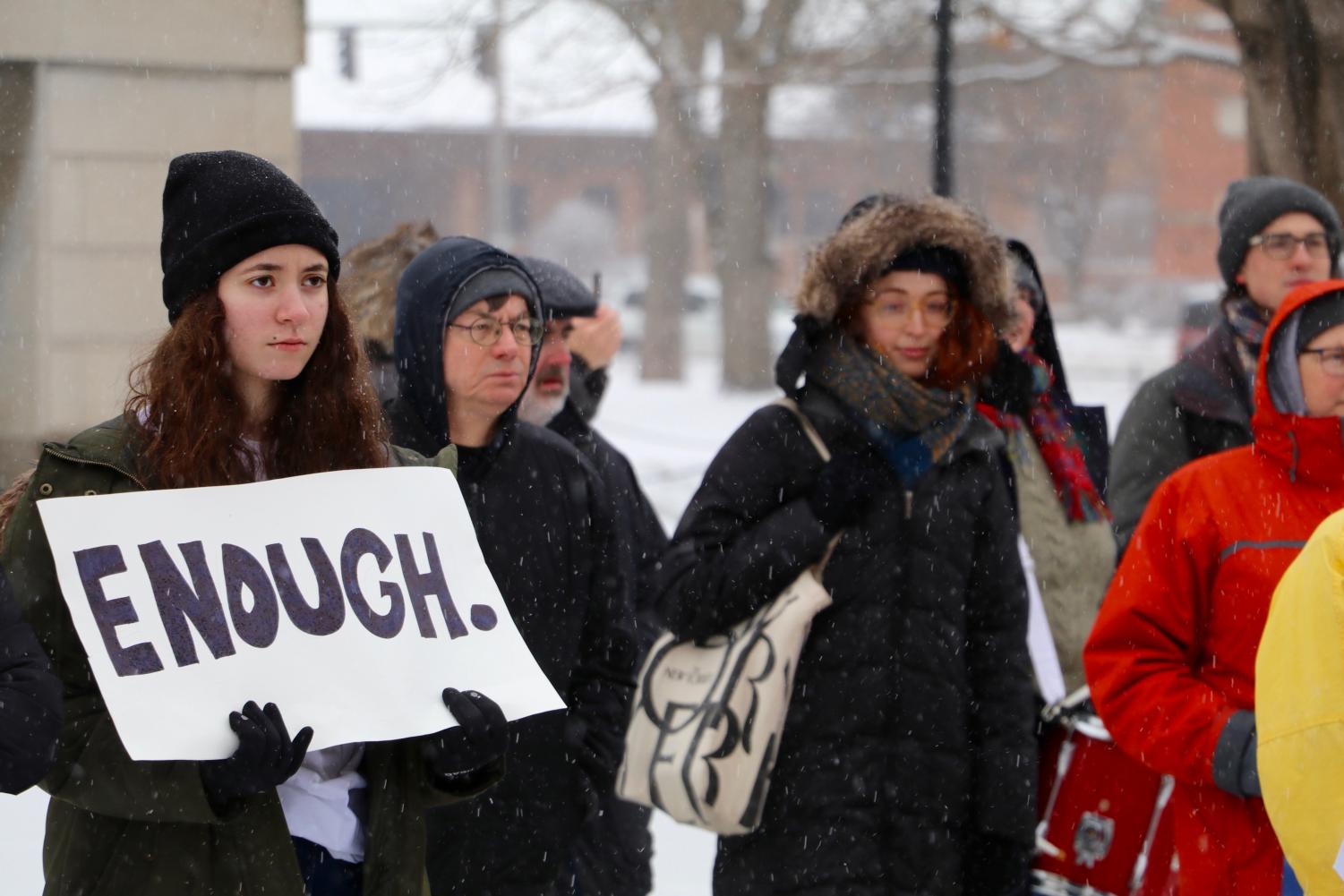 Thousands Gather Worldwide for March for Our Lives

“I felt invincible that day.”

Nina Lavezzo-Stecopoulos ’20 woke up on Saturday, March 24th feeling extremely nervous, despite the confidence she had felt leading up to the worldwide March for Our Lives protest against gun violence.

Despite the bad weather, the march exceeded all expectations.

“I was pretty worried. I thought we would have about a hundred people at most. When I got there, there was a small crowd, but when we started marching I kept looking back to see if our crowd had grown and I just couldn’t see the line of people marching on the sidewalk stop, which was really amazing,” Lavezzo-Stecopoulos said.

The turnout was so large that by the time the front of the group had reached the Pentacrest, there were a couple of people who had run from College Green Park to say, “Don’t start the speakers, there are still hundreds of people coming.”

“We marched through a blizzard but the march still happened and we had 800-1000 people show up. There were people in wheelchairs, people brought infants, dogs, and there were people of all ages. It was really exhilarating and it was really cool to see everything we had planned actually happen,” Shayna Jaskolka ’18, an organizer, said.

Nineteen high school students came together and planned the march in only three weeks despite not knowing each other.

These marches not only happened across the country, but around the world.

“One of my favorite parts was that we did this together,” Jaskolka said. “Before the march even started we had someone from Switzerland send us a bunch of posters that they had made to print out ourselves. It was really cool to see and to know that so many people all around the world were doing this with us. We all stand for the same thing, we all want the same thing, it’s such a unified effort.”

The fact that this was a worldwide event was a standout moment for Lavezzo-Stecopoulos.

“We were in a group chat with all the other organizers, with all the other marches across the world, and that was the exciting thing for me. Finally we were part of the people making the change rather than just someone in the crowd,” Lavezzo-Stecopoulos said.

In Iowa, many students who put this march together are in the group Students Against School Shootings, also known as SASS. This includes Esti Brady ’20.

“Seeing so many people made me and the other SASS members so proud that what we had done had been executed well and that people were showing up just as excited as we were showing how much we care about this issue,” Brady said. “When we got up on the stage to sing ‘Lean on Me,’ I was close to tears. That was just really moving and it felt really good to just come together and express a lot of joy happening in this time of exhaustion from all the work we’re doing and all the sadness about all of the events. But afterwards, I just felt really proud of it.”

One of my favorite parts was that we did this together. Before the march even started we had someone from Switzerland send us a bunch of posters that they had made to print out ourselves. It was really cool to see and to know that so many people all around the world were doing this with us. We all stand for the same thing, we all want the same thing, it’s such a unified effort”

“I decided to be a part of this movement because I think that this is an issue where there is a lot of consensus between both sides of the political spectrum that something needs to be done about it. But for a really long time, nothing has been done,” Brady continued. “After Parkland, when the students who were survivors of it made such a passionate display that just said, ‘We’re not gonna stand for this, we’re gonna do something about it.’ I think that really motivated the nation to say, ‘We can do something about this, we don’t just have to sit back and watch this happen over and over again.’ For me personally, I’m just very politically active in a lot of issues and this is something that I really care about.”

A standout moment for everyone was when sixth-grader Margalit Frank gave a speech.

“I would probably say the big takeaway moment for the audience as well as the organizers was when the sixth grader got up to speak. That just really touches upon how personal it gets for students who maybe shouldn’t even be hearing about these terrible incidents,” Brady said. “I think the overall feeling that was left with the protesters was hope. I think that when all of these tragedies happen over and over again it’s hard stay strong and stay hopeful and positive about the future, but I think March for Our Lives, especially because it was happening all throughout the world, allowed us to feel hopeful that things aren’t going to stay this way forever.”

“Seeing how successful this march was has erased any doubts I had about myself and my peers. I just don’t really have any doubts for us in the future at all, I think that amazing things are gonna happen”

“I have a huge fear of public speaking,” Jaskolka said.

“However, I was the one that went out and introduced the speakers, I led a bunch of chants, I helped out if a speaker needed to switch a microphone or something, and I gave my own speech so I really stepped outside of my comfort zone. We always are taught about leadership skills but you never really get to use them. This was one of those moments where we got to use them.”

For Jaskolka, one of the most inspiring things that came out of the march was being recognized at work later in the day.

“I was still wearing my ‘Never Again’ sweatshirt at work and at the end of my shift, I had a dad come up to me and ask if I had been at the march that day and if I had given a speech because I looked familiar,” Jaskolka said. “He gave me a tip, which is unusual because at my job I don’t really get tips, but he gave me a $20 tip and said, ‘Keep on doing what you’re doing, you are the group of people who are going to change the world,’ and that was so reassuring to hear. He even said to his five children, ‘Look at that fantastic person and what she did today,’ so that was a really cool moment.”

The impact students have made only shows how capable this generation is.

“Seeing how successful this march was has erased any doubts I had about myself and my peers,” Lavezzo-Stecopoulos said. “I just don’t really have any doubts for us in the future at all, I think that amazing things are gonna happen.” 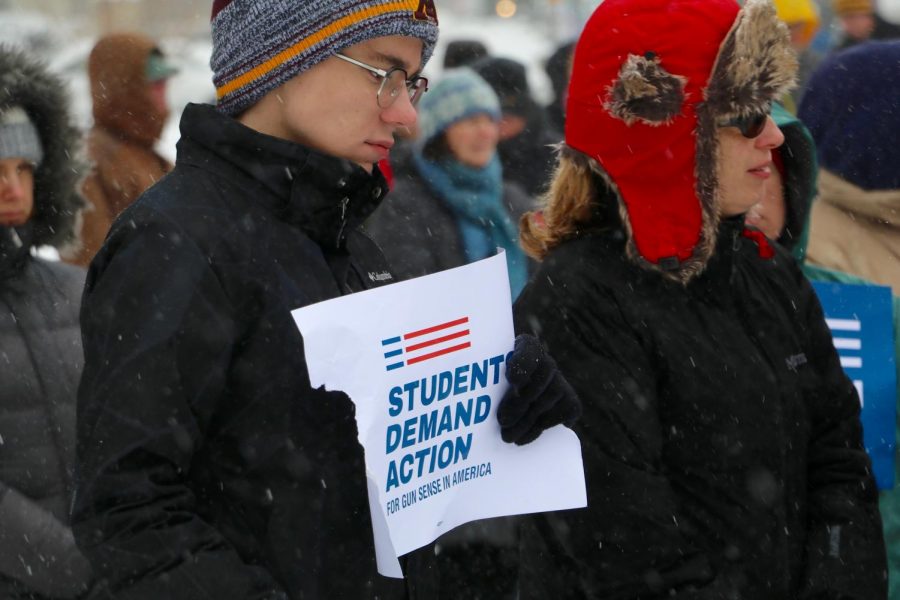