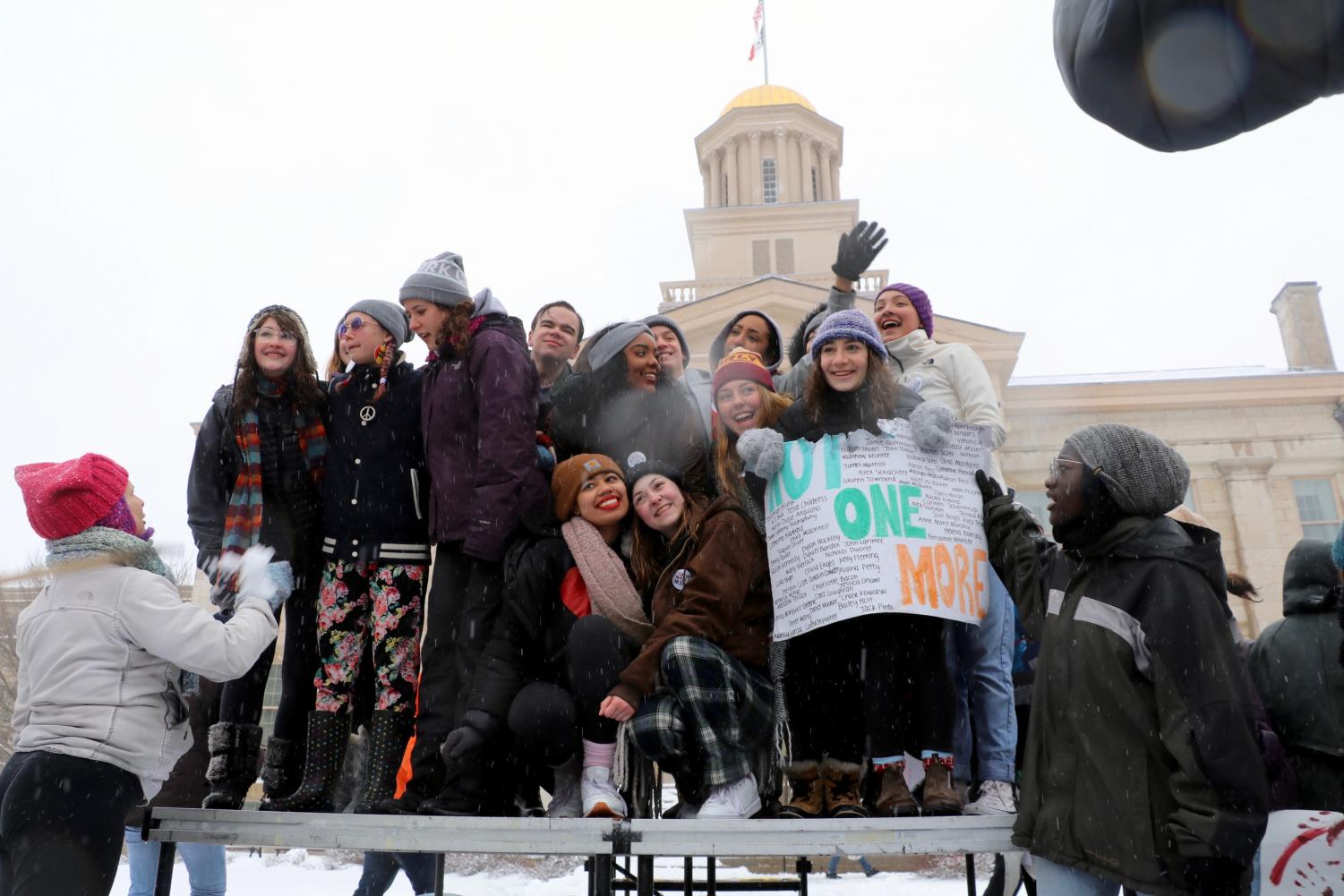 Student activism has been at its highest recently, stemming from gun violence protests around the country. Following the shooting at Marjory Stoneman Douglas High School on February 14th, student activists from South East Junior High decided to protest and walk out the next day along with both City and West High Schools. One major thing that came out of this was a student activist group called Students Against School Shootings, or SASS.

Shayna Jaskolka ‘18 is one of the students who helped plan the walkout, and is a core member of this group.

“SASS is Students Against School Shootings, and our goal is to inform people about gun violence and how there are way that we can stop it and make sure that people are educated about guns so people know the damage that guns can do and our goal is to hopefully convince senators and representatives of Iowa and everywhere in the country to pass some sensible and common sense gun laws,” Jaskolka said.

Although there was limited time to plan the protest, Jaskolka was proud of how the event turned out.

“We found out that South East Junior High was planning a walkout the night before and so instead of doing something of our own, we decided to go and just do the walkout with them. We planned and put together the entire walkout in about twelve hours, which was really impressive,” Jaskolka said. “After that, I think all of us in the group felt really good about what we had done, so we wanted to keep doing more. So this group basically formed from what we thought would be an ill-planned walkout.”

One thing Jaskolka particularly enjoyed was being one of the group’s organizers.

“I’ve always liked being the leader because you get to watch over everything, see everything happen and you get to participate in the planning process,” Jaskolka said. “I’m just really excited to be a part of this group and be an activist. I’m really glad I was able to help start this group too. Instead of just being a part of an organization, I get to say I helped start it.”

Before this protest, Jaskolka’s activism had been fairly limited to social media rants.

“I often post angry rants on social media about things President Trump has said and things from people who identify with the Republican party, but I never really did anything about it so I was really excited when I was able to participate in the walkout because I was actually doing something,” Jaskolka said. “People are actually going to see this, and it’s going to hopefully make a difference. I don’t want to take guns away from people, but there definitely need to be better regulations on them.”

In the future I hope to see this group expand some more within the boundaries of Iowa and maybe even some more. I want to keep contacting more people, more politicians, have more discussions, and go places. Right now we’re planning on possibly even going to Washington, D.C. We just make as much of an impact as we can”

Bihotza James-Lejarcegui ‘18 is known for being a student activist at City High. After hearing about the planned walkout at South East Junior High, she immediately contacted her friends from both City and West to help organize the protest.

“The main goal right now is just to try and keep the momentum of the movement going and make sure that it continues because I know adults and politicians are really hoping for young people to just forget about the issue after a walkout and get over it. I think our job is to keep getting people informed and involved and doing our research and contacting people and just making sure that the momentum continues,” James-Lejarcegui said.

Student activism and leadership is not unfamiliar to James-Lejarcegui.

“I feel like I’m kind of known for being a bit of an advocate at City High because I just love doing things like that. It’s always something to work on. I definitely have worked with initiating things and doing social justice and I have started programs in the past for other stuff although they were pretty established,” James-Lejarcegui said. “None of those things were as big as this though, and they didn’t involve West High as much so this is really cool. We get to work with students from West High and South East Junior High, and we even have a website so it’s becoming pretty established.”

James-Lejarcegui hopes to see SASS continue to expand even after the local protests die down.

“In the future I hope to see this group expand some more within the boundaries of Iowa and maybe even some more. I want to keep contacting more people, more politicians, have more discussions, and go places. Right now we’re planning on possibly even going to Washington, D.C. We just make as much of an impact as we can,” James-Lejarcegui said.

Nick Pryor ‘18 is one of the core members of SASS from West High, and on the research and publicity committees.

“As a core member, I’m one of the organizers of the events we plan and attend the weekly core member meetings. On the research committee we work on keeping up-to-date on the most recent facts and statistics and legislative actions that are being taken. On publicity we focus on getting the ‘SASS name’ out there on social media and around Iowa City,” Pryor said.

Although Pryor has not had previous experience organizing groups and events, politics is something he has always been passionate about.

“Bihotza got in contact with me and the other three organizers at West—Wala [Siddig ‘18], Safeya [Siddig ‘18], and Lujayn [Hamad ‘18]—the night before the walkout,” Pryor said. “I think especially following Stoneman Douglas, the issue of gun control is on everyone’s mind. I felt like it was the best opportunity to start getting involved and getting our voices out there.”

Although things have calmed down since the first week of organizing the walkout, there is still a lot of energy in the group.

“After the March for Our Lives event on March 24th, hopefully we’ll put together a more concrete expansion plan. But so far we have gotten some other schools around Iowa involved in walkouts and other protests,” Pryor said.

All members agree that they hope not only SASS but also student’s activism continues in the future.

“We hope to see this group having more letter-writing and calling campaigns to senators and representatives, keep protesting and organizing rallies and walkouts, and to bring attention to the gun issues in the United States,” Jaskolka said. “We hope that, even though at the moment half of us in the group are seniors, we will be able to start SASS branches at whatever colleges we go to and keep this momentum going. We want this to be something that continues, because a lot of activist groups fizzle out over time but this is such a big issue that we want to make sure that something gets done about this and that it lasts.”