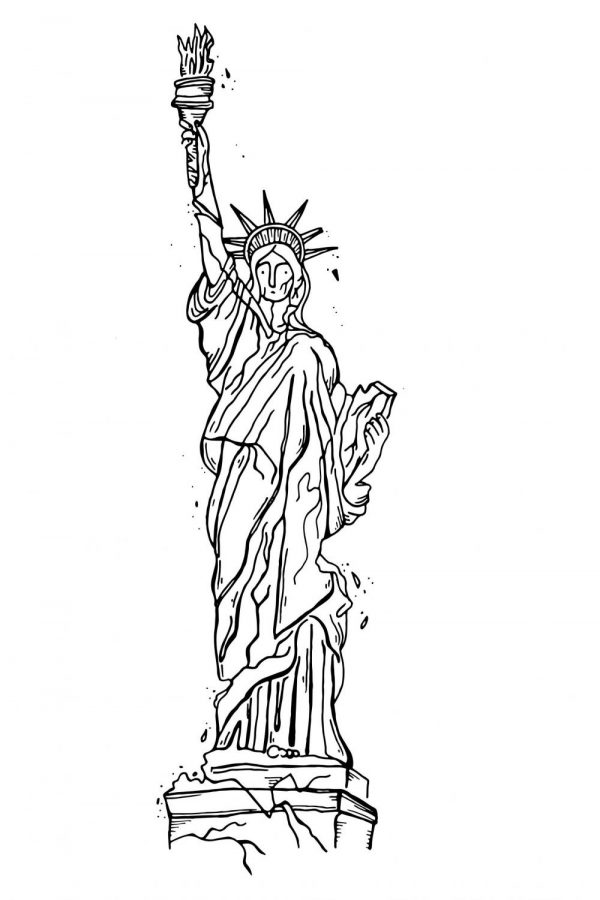 Head to Head: Stars and Strife

Patriotism is a concept upon which, ironically, many Americans disagree. Two sides of the debate are shown below, as two Little Hawk staffers go head to head, presenting their own opposing views on the subject

Citizens of the World

My father is an immigrant. When he drives me to school, he looks out the windshield into the Iowa winter and calls himself “a citizen of the world.” I peer along with him, and wonder what it would be like to live somewhere else, to find myself torn enough between two places I might call home to give up setting one above the other and call myself a citizen of the world, with allegiances to be pledged not to my country but to something more instinctive, something global, something which jumps over the walls we build to keep ourselves locked away. The ivory from which we build our towers didn’t come from the States.

It seems that those who feel a strong bond with a certain nation look at those who don’t, they think that we do not know what it feels like to have those ties that bind. I have pride and loyalty, and I believe strongly in liberty and justice; I also have the unshakable impression that those things don’t come from any specific plot of land.
The products of misplaced and overzealous patriotism resulting in nationalism can be seen throughout history. Nations’ motivation to establish themselves in a position of power has resulted in programs of imperialism, in wars, in genocides, in dangerous divisions between countries and regions. Not only this, but many varieties of nationalist ideology draw lines between people of certain cultures and races, defining a country by the traits of the majority of the people who live there. This divisive rhetoric can result in institutionalized discrimination, reducing people like my father to foreigners, people who are told to go back to their own countries. My father is a citizen of the world; to which country should he return?

Of course, not all patriots go this far in their speech or in their actions. America’s founding ideals–freedom, equality, and human rights–are excellent ones and can give us standards to which to hold ourselves. Unfortunately for those ideals, however, our country has an inclination toward patriotism which manifests itself not in social aid, in working to better ourselves, in removing the systemic inequality ingrained in our society, but in harmful, exclusionary political and social discourse. Donald Trump’s rhetoric of “Make America Great Again” has promoted an image of his ideal America, one which disadvantages people of color, women, immigrants, religious minorities, people in the LGBT+ community, and many other groups who are marginalized in today’s society.

Patriotism frequently causes people to turn a blind eye to the problems inherent in the US’s past and current policy decisions, particularly issues which affect certain classes or groups of people. Overtaxation on the lower socioeconomic classes and tax cuts for the wealthy are still a major shortcoming in our policy decisions, both state and federal, and Iowa has seen how tax cuts greatly benefit the top 1% and end up slashing our budget to tatters. It can also blinker citizens to problems of systematic oppression such as police brutality, equal pay over gender and race lines, and the US government’s abhorrent treatment of Native Americans, whom it originally killed in huge numbers to claim land as its own and to whom it still causes immense harms.

Badly translated forms of patriotism directly affect citizens in debates such as gun control, one of the most controversial and polarizing issues in America. Many gun-rights activists use the Constitution to justify their argument that owning guns is a fundamental right, claiming that our Founding Fathers would not have wanted gun control. Here, citizens use patriotism to justify supporting a position which results in the deaths of thousands every year.

Laying aside the US’s political and social issues, however, I personally cannot prioritize ties to country over those to family and friends, those to loved ones, and those to all the people I never have met who deserve my respect. Although I agree with many of the fundamental principles upon which this nation was founded, I do not believe that the way to achieve them is by isolating and deifying ourselves. How many times have I been told that the US is the greatest nation in the world? How many times have I been made to deny my identity—as a daughter of people who have taken their own journeys across states and countries and many, many borders to the here and now, as a sister to all the people inhabiting this planet which is becoming less and less blue, as a person in and of myself, as a citizen of the world? How many times have we all denied our own roots in this Earth and not in its lands?

I see no point in defining myself by this dirt which crunches between my toes in a place I happen to inhabit in this lifetime. No one, not even myself, knows who or what I may be in the future—or where. All I know is that I need to define myself not as someone who sits under the sun which belongs to the United States, not as someone who watches the stars which belong to the United States, not as someone who smells the winds belong to the United States, which ram up against our rigid borderlines. No, I must call myself a citizen of the world, one who cherishes liberty and equality for everyone, no matter who they may be or where they may live. I must remember always that the ivory from which we build our towers did not come from the States. I must remember always that the sun and stars and winds—and yes, even the soil—are always in motion, and belong not to any one of us or to our flimsy flags, but to the many spaces between.

I am a patriot. That’s not something that a lot of people in my generation, especially in a place like City High, would say. It’s strange to me that so many young people actively reject patriotism, because their activism, community involvement, and awareness would seem to indicate otherwise. It’s a little troubling to me, because it indicates a deep division within America and within the way Americans view their own country. Many people in the United States are too quick to reject their own country, even if their hearts are in the right place.

Of course, this is not to say that someone has to be a patriot. But I also think that people, in their haste to reject patriotism, harm the causes they seek to support. Many liberals distance themselves from patriotism because such pride is irrevocably linked to nationalism and conservatism in their mind. However, what they don’t realize is that they are, in effect, seceding America, or at the very least the ideal of America what should be like, to the very people with whom they disagree. By abandoning all overt pride in their country and the ideal, we are in essence conceding that the conservative vision of America is the true one. We are conceding that conservatives and conservative ideals represent America, that they are the true Americans, and that their America is the true America, even though it’s not the America we want to see. It gives conservatives power over the American narrative and control of our national identity, despite the fact that a liberal America is just as true to American values, if not more so, than a conservative one.

Likewise with those who look upon America’s long and often shameful history and reject any sort of national pride. Because of slavery, because of the institutionalized racism, because of the sexism, because of the homophobia, they won’t be proud of America. Although such people’s hearts are in the right place, their actions seem wholly counterintuitive to me. Yes, the slave owners, the lynchers, the KKK, the Jim Crow-ers, the sexists, and the homophobes were all American. But do you know who else was? The slaves. Martin Luther King Jr. Harriet Tubman. Rosa Parks. Frederick Douglass. Every single black American who stood up against injustice. The LGBT+ community and every single woman who did the same. By rejecting America in the name of the wrongs done to them, these people perpetuate the idea that the people who stood up for their rights in this country are somehow separate from America itself. Such a mentality accepts that America belongs to the white cisgender male and that therefore these people are less American and less representative of its ideals. It’s an unintentionally ironic outcome, given that it is the precise opposite of the cause which these people are attempting to support.

America’s bloody past is the strongest argument against patriotism. Such a sentiment is beyond understandable, because even if those wronged were Americans too, it doesn’t erase the way that our government, our society, and the majority of Americans behaved and believed. However, there is not one nation on this Earth that doesn’t have a stained history. I don’t think you can be proud of a country without also taking on the burden of responsibility for what it’s done. By taking pride in the United States, you’re giving yourself an identity as a member of this country, allowing yourself to speak up for change, and taking pride in the good things that it has done, even though you weren’t directly involved.

By doing this, you also have to bear the burden of the evil, because you cannot be selective about your citizenship. That’s not how being a responsible member of society works.
However, the converse is also true. I don’t think you can accept the historical shame and responsibility of righting past wrongs in this country without also taking pride in the good. National identity doesn’t work on a timeshare. Certainly, it doesn’t make much sense to only take responsibility in the bad, because national identity is not founded on the negatives, or guilt, or blame. It is founded on pride.