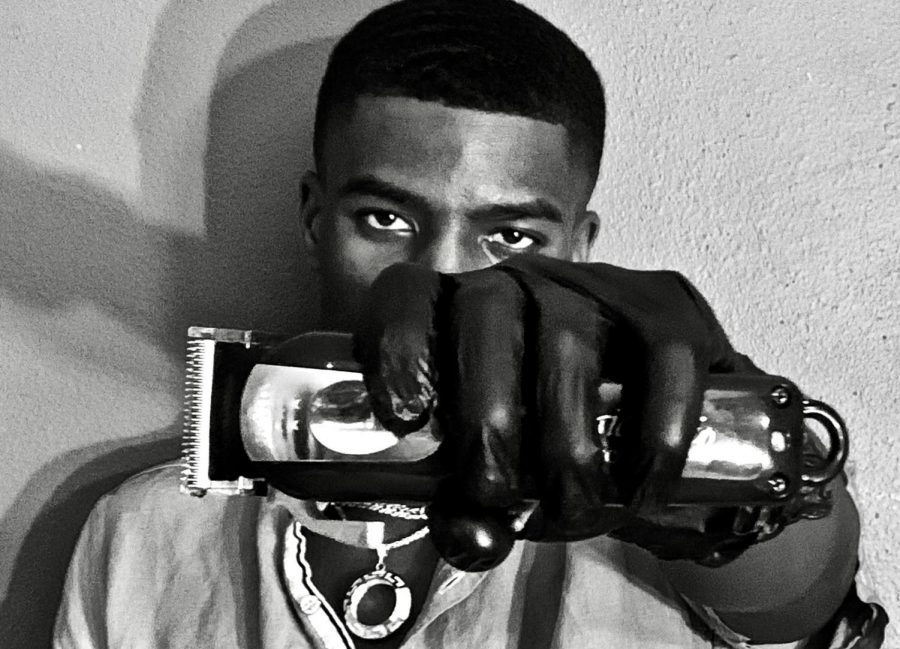 Maisha Sila ’20 in his barbershop holding his hair clipper.

Maisha Sila '21 talks about how he got into the owning his barbershop and how he plans to expand it after high school.

The red and white carpets, the black wood-framed mirrors in place on the clean white walls of the room, and the bright orange-red chairs on the edge of the space—all this detailed decoration comes from the mind of Maisha Sila in order to make a basic room look like a professional barbershop.

However, Sila’s business did not start off with all its success. Rather, it began in a small bathroom cutting his father’s hair in the 4th grade in 2011. During that time, Sila’s mom was his dad’s barber. When his mother became pregnant, she wasn’t able to cut Sila’s dad’s hair. Sila recalls a phone call from the hospital asking his father to go see the babies, because his mom had just delivered them. His dad needed a haircut, so he asked Sila to cut his hair. However, his father was not pleased with the haircut, so he asked him to cut it a second time.

“When I first cut his hair I left a patch of hair in the back of his head,” said Sila. “About a week later, he asked me to do it again and I got it right, so from then on he just kept coming back every two weeks. When my brother was about four months my parents asked me to cut his hair and I did. Then it spread to my whole family, cousins, brothers, and uncles.”

Being the family barber changed when Sila moved from Grand Rapids, Michigan, to a Broadway apartment in Iowa City in the summer of 2013. Sila transitioned from being a family barber to cutting hair for everyone in his neighborhood.

“Where I lived, there were no barbers, so I would cut hair for my classmates, neighbors, and friends,” Sila said. “I became their barber. I started getting more interested in cutting hair. I remember I started taking it [more] seriously in middle school.  I got rid of the Walmart clippers my mom gave me in sixth grade and I got my first real clippers from Sally’s. That was the beginning of my journey.”

In the beginning, Sila never charged anybody money. He was just a friendly neighborhood barber giving his classmates and family haircuts. He recalls just enjoying helping his friends and family. Later, things began to take a different turn.

“I remember at the end of 2013 this client—he was my friend’s father—he came over because he needed a haircut for an interview. I gave him a haircut and it was [really] good so he gave me $5,” Sila said. “When he gave me the $5, I don’t know why, but that motivated me. That’s when I realized, ‘Oh my gosh, I’m a barber!’  That was the first time I actually felt like a barber after two years of cutting hair.”

When Sila and his family relocated to a different house, he felt as if the bathroom was becoming too small, so he asked his mom for a room in the house dedicated for him to cut hair. She gave it to him and the business blew up from there.

“I just wanted to see how big I could make it,” Sila said. “I had saved up to about $500 before we moved to a bigger place. I bought a table, mirrors, and new clippers. I just wanted to look professional with it, even though I was young.”

Sila customized the entire room to create an atmosphere that would draw customers in.

“My shop—it doesn’t feel like a barbershop,” Sila said. “It feels like a place where people just come in to have a good time. They also get to see their favorite person, which is me.”

Sila believes that people’s support catalyzed the success of the shop. The relationship and connection that he created with his clients fostered the support.

“It was my [first] client that made it bigger than it was,” Sila said. “I remember when my first client came into the shop, they were like, ‘Whoa, this is a whole shop. Are you serious?’ They just took it and [elevated] it [through] their support. There are a number of good barbers out there. I also have people who live closer to [other] barbershops, but they will drive 20 minutes or more just to come to my place.”

Outside of cutting hair Sila, is a varsity football player and a track runner. He can be seen on the football field with the number 20 on his jersey. However, sometimes, there just aren’t enough hours in the day and he has to choose between one passion or the other.

“It is one of the most complicated parts of life, because I have so much love for cutting hair but also playing football, which takes up about 90 percent of my time,” said Sila. “There are times where I have to sacrifice football or cutting hair.”

During Sila’s sophomore year playing football, he initiated a schedule that would assist him to balance school activities and his professional life. He determined that during the season, he would work more on weekends and less on weekdays and get at least one or two clients in after Friday home games. All that would leave him with little to no free time, since the little time he did get after playing football, he spent cutting hair.

“The reason why deciding is so hard is because cutting hair used to be a part-time job and having to maintain all the clients is hard now because everybody needs a haircut,” Sila said.  “For track, it was just certain times I skipped practice to cut hair, and I got in trouble with the coaches a lot. Being in love with cutting hair got me in trouble.”

Sila had launched a successful business, but it became extremely busy and overwhelming. He needed to create a successful schedule that would assist him to balance school and work. That is when he established an appointment system for him and the clients.

“In the beginning, there used to be a lot of people in the shop, but being a teenager I can’t just always be in the shop the whole time,” Sila said. “People now just call me or make an appointment through this website. On the website, I put my available time[s] and anyone can click on it to see my schedule. The clients can see the hours that I’m available and the hours that I’m not. “

Sila’s goals have also helped him prioritize his education. Through trial and error, he has created multiple schedules that would allow him to complete homework.  He knows his plans for the future and will not allow anything to distract him.

“What I want in life is to become a businessman,” Sila said.  “School is the key to that at this point. Even to become a barber, I have to be in school first. I’m not going to become a professional barber if I don’t succeed in school. Without school, I’m nobody but a street barber.”

Owning a business, especially at a young age, includes numerous responsibilities. The work that one puts in determines whether the business grows into an establishment that is successful or not. Sila sees the benefits of creating his own barbershop, knowing that he is his own boss and that he is the creator of all that he owns.

Advice Sila would give to anyone striving to initiate their own business is to not be afraid.

“I remember buying my first clipper and it was $42. I put a lot of thought into it,” Sila recalls. “‘Should I do this or not? Is this important?’ You should never be afraid of trying to do something big just because of your age. I feel like you can do anything.”

“He told me, ‘What you got right now is way more important than someone who makes $30 per hour or more,’” Sila recalls. “‘It does not matter how much they make, they’re still working for somebody, and they can always get fired. You got something that [prevents] you from getting fired. You can control the whole thing. Even though you’re not making anything right now,  your still winning because you have ownership.’”

Now, Sila is thankful for and understands the advice given to him by his uncle. He has developed and is continuing to do so with his barbershop business. He also recognizes what his business exemplifies to his community.

“Nobody thought I would be able to handle it, so it feels good but not just for me, [but also] for my family and my community,” Sila said.

Although Sila has established his legitimacy in being a good barber, he still constantly receives doubts from some of his first-time clients.

“I actually appreciate those clients that doubt [my talents],” Sila said. “Those doubts challenge me. They just make me want to do even more because now you sit on my chair and I just got to prove to you that I got it.”

One challenge that Sila experienced was learning to cut different textures. Sila recalls dealing with a client who believed he could not handle his kind of hair.

“I remember in 2016, [I got] my first white client with curly hair. It was hard for me because it was different hair,” Sila said. “That was my most challenging [job], but now I’m comfortable with it. The client did not believe that I could do it, because they saw that I mostly cut Black people’s hair.”

To further his education, Sila plans to attend one of the two top beauty schools in Iowa, which are Capri College and LaJames.

“I might end up a[t] Capri, because Capri is more known for barbering, but LaJames is closer to me than Capri,” Sila said.

Sila hopes to further his education in order to pursue his passion of getting to barbering.

“It’s not just a job, it’s also it’s a way for you to connect with people,” Sila said. “Every time you give someone a hair[cut], you get to know them and you get to have that conversation of who you are and who they are.”