How one dog can change a boy's life. 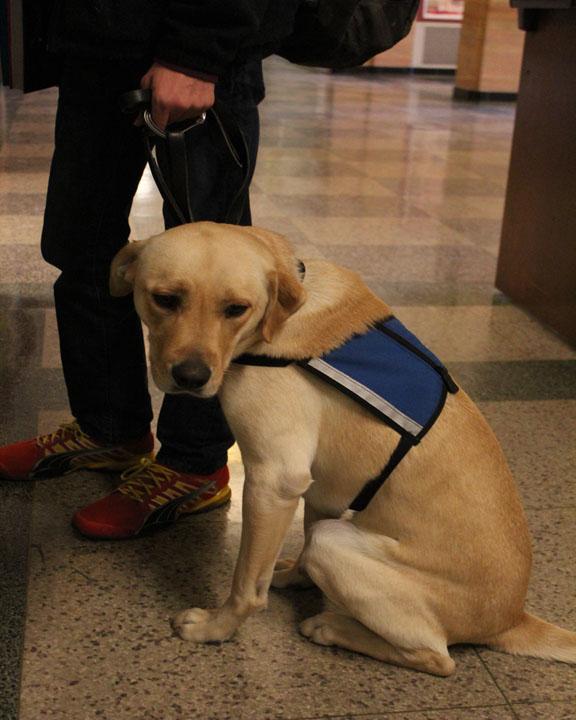 Isaac Clough, ‘14, is one of 25.8 million people in the United States that have diabetes. However, his way of dealing with his disease is unique. Clough is the first student at City High ever to have a service dog that helps him regulate his blood sugar levels.

“My blood sugar has been much better ever since I got Duke- much more even.” Clough said.

There are three ways that diabetes occurs. Clough has Type 1, which develops during childhood or early adolescence as a result of the pancreas not functioning properly. This means that the body can no longer process glucose, or the sugar in foods, correctly. In a normal person the pancreas will keep the levels of glucose in the blood normal using insulin, a hormone it secretes. When a person has Type 1 diabetes, insulin is not made.

“Isaac has always impressed me with how independent he is with taking care of his diabetes.” Principal John Bacon said.

The normal blood sugar level is about 100 mg/dl. Isaac’s blood sugar is normally around 80-150, with insulin. His service dog will help remain on track by alerting him whenever his glucose goes up or down unexpectedly. Duke can also be trained to get Isaac his blood sugar checker.

“The highest I’ve ever been is 600 and I just felt really sick to my stomach.” Clough said.

A common misconception about Diabetic Alert Dogs is that they’re an alternative to testing blood sugar, but this is not what they’re used for. Primarily, they warn their owner when their blood sugar is either dropping or rising.

As Isaac is diabetic, one can imagine the complications he might experience in college. How would he take care of himself if he’s unresponsive when he goes too low or too high?

“I’m concerned that he’ll get in a situation where he can’t help himself…if he’s low he can’t function and if he’s too high, he can go into a coma.” Sara Clough, Isaac’s mom, said.

The Clough family first found out about service dogs when they were doing research on how to handle Isaac’s diabetes while he was away at college. They then filled out an application online. When accepted, Isaac had to do a saliva sample. The trainer, Lily Grace, then trained Duke with Isaac’s samples. The Cloughs put down a deposit. A year later they finally got Duke. Lily also came for a day to help teach Isaac the commands and how to get used to having a service dog.

“I learned his commands but I still have to get used to having a dog jump on me at night being a good thing.” Clough said.

“It’s fantastic legislation, Isaac is allowed to take Duke anywhere,” Sara Clough said.  “We call the police and file a report if they try to refuse him. ”

In New York, another student was not so fortunate to have an accepting school. Madyson Siragusa, a 5th grader with diabetes, was not given permission to have her dog with her at school on the grounds that it would be a distraction to students and it was “unnecessary.” This case is still going on.

“There’s no way New York will win. It’s against the law.” Sara Clough said. “Simple as that.

diabetes.  One is the experimentation with STEM cells. Researchers

have not yet perfected it, but they are well on the way to being able to grow new pancreases

for diabetics. Some aren’t convinced this is necessary because of pancreas transplants but

demand for pancreases is through the roof.

“I’ve thought about getting one,” Isaac said. “but I think it would be better to wait for the cure, which is predicted to be out in ten to fifteen years.”