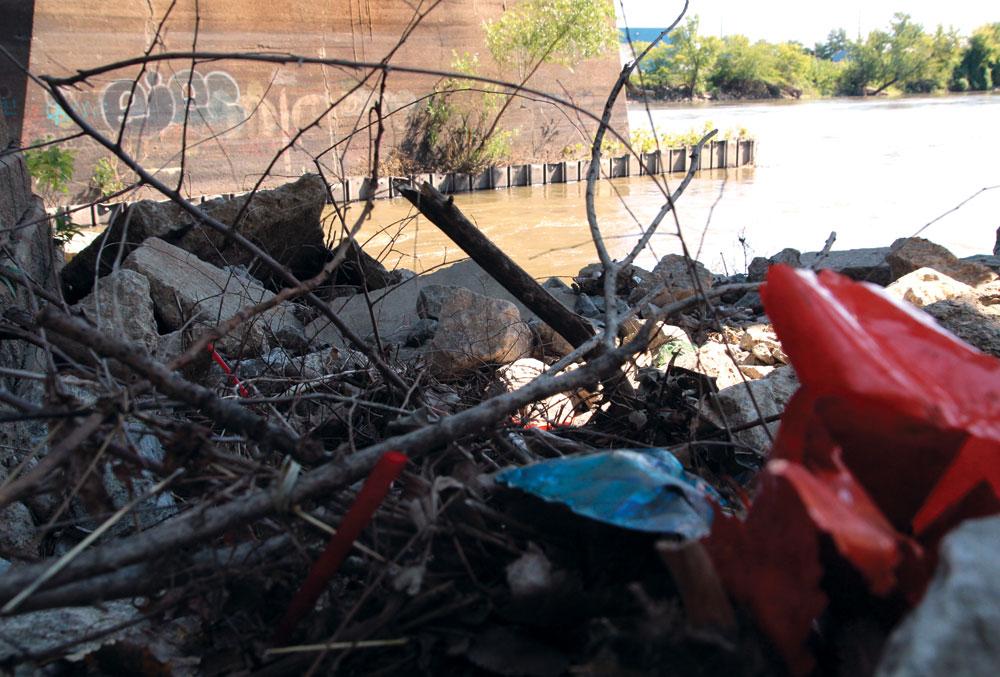 What’s in Your Water?

A goopy, blue-green mixture washes up on the shores of lakes and waterways. It has the potential to kill animals and is a threat to human health. Dangerous though it may be, both Ohio and Iowa can find blue-green algae in its waters, caused partially by agricultural sediment and fertilizer runoff.

A total of 250,000 residents of Toledo, Ohio were left without drinking water when an algae bloom formed directly over the city’s water-intake pipe in Lake Erie, the state’s main source of water. Lake Erie has been polluted with the same kind of heavy doses of phosphorous that is found all over the state of Iowa. Both states are being affected by nitrogen, nitrates, and phosphorus. These toxins have heightened the fears of those using Lake Erie for drinking water in Ohio. Likewise, the toxins have affected people in Iowa who use source water, water used above the ground.

“I wouldn’t be surprised that Toledo is requiring farmers to get a license to fertilize, considering what happened [in Ohio]. But I have not seen that yet happen in Iowa,” David Osterberg, co-founder of the Iowa Policy Project, a nonprofit, nonpartisan organization which produces research and analysis to engage Iowans in state policy decisions,  said. “Would that be a good idea? Maybe,” he said. “A strictly voluntary program has gotten us to where we are, with very dirty water. You have to go beyond voluntary in order to get us out of this problem.”

High levels of nitrogen and phosphorus are found in chemical fertilizer and manure farmers use and produce, and sediment that contains runoff from livestock and feedstocks form algae blooms that plague Iowa’s and Ohio’s waters. Through the Environmental Protection Agency’s (EPA) Safe Drinking Water Act, the level of nitrates is required to be kept below below 10 milligrams per liter. These levels aren’t always met.

Particularly nitrogen and phosphorus make lakes unsafe for recreational activity, and to use for drinking water.

However, Iowa’s algae bloom problem expands out of the state, and through three others, before it reaches its destination. There it has caused a dead zone in the Gulf of Mexico that is about the size of New Jersey. The polluted water continues to form the blue-green algae, which cuts off oxygen to the marine life, eventually killing it.

“I don’t go tubing or anything in the Iowa waterways; I don’t know why anyone would, because it’s disgusting,” Lilly Brown ‘15, President of City High’s Envirocity club, said. “It’s affected me indirectly in making me realize that there are problems, and wanting to help try and solve them.”

I don’t go tubing or anything in the Iowa waterways; I don’t know why anyone would, because that’s disgusting.”

Envirocity is an environmental club at City High that focuses on bringing students together who are concerned about environmental problems, and figuring out how they want to go about fixing them.

“A lot of times, kids don’t have a lot of input on those types of things,” Brown said. “It’s about just having your voice heard.”

While the club isn’t currently focused on water contamination, Brown researched India’s water through the World Food Press last year. As an educated follower of the water pollution issue in Iowa, Brown discussed Iowa’s attempts to reduce the problem.

“Iowa has mediocre standards, but obviously there’s room for improvement,” she said.

In both Iowa and Ohio, environmental recommendations have been issued by the EPA, a federal agency that sets suggestions for states to follow. Each state in the country makes their own decisions on regulations when it comes to fertilizers or water pollution levels. Some states opt to follow the suggested standards more loosely.

Iowa’s land is 90 percent dedicated to agriculture, which makes it more difficult for the state to comply with EPA recommendations. Corn requires nitrogen which is added to the soil through nitrogen fertilizer or manure. These loose recommendations don’t even hold Iowa accountable for dispensing non-point (indirect) sources, such as agricultural runoff, into the waterways.

The federal Clean Water Act, passed in 1972, has strengthened the scope of the national government’s environmental power, as all states must abide by its standards. However, its primary focus on regulating point (direct) sources, which include wastewater treatment and stormwater discharges, causes the neglection of non-point (indirect) sources, including agricultural and urban runoff in its set of standards. As non-point sources are not nearly as tightly regulated, they therefore fall to the discretion of the farmers who use fertilizers full of nitrogen and phosphorous, the two chemicals largely responsible for the chemical contamination in Iowan waterways.

Further weakening the act is the Supreme Court’s questioning of the breadth of its jurisdiction over wetlands and watery areas that aren’t directly connected to streams. These semantics limit environmentalists’ ability to protect the waterways.

“There are not mandates that say, ‘If you pollute water, we will stop you,’” Osterberg said. “The law is not there. There are far too many nutrients going into waters in Iowa. Everybody acknowledges that.”

Therefore, addressing the control over nonpoint sources is mostly left to the states. Iowa has chosen not to act, giving its farmers free reign in fertilizing their cover crops.

The act is also only directed toward cities, which must spend millions of dollars to treat the water before it can be discharged back into the Iowa River, in Iowa’s case. Farmers causing pollution, however, are not mandated to reduce it.

“We don’t have to argue if we’re producing too much [water pollution through chemicals]. We are,” Osterberg said. “But how you get reduction of that ‘too much’ is the question.”

In order to attempt to strengthen the Clean Water Act, the EPA has formulated the Nutrient Reduction Strategy (NRS), a strategy developed by the Iowa Department of Agriculture and Land Stewardship, the Iowa Department of Natural Resources, and the Iowa State University College of Agriculture and Life Sciences, which has the goal of cutting the amount of nitrates and phosphorous directed through Iowa waters and the Gulf of Mexico by about half.

It is up to Iowa to sow the seeds that will harvest clean water.”

“It is up to Iowa to sow the seeds that will harvest clean water,” Osterberg said in his recent paper on the effectiveness of Iowa’s Nutrient Reduction Strategy. “Iowa’s taxpayers and farmers together must identify situations to achieve the most benefit for the lowest expense.”

Any action a farmer takes to reduce pollution produced on his farm is voluntary, but the federal and state governments compensate him, for motivation, if he takes action. For instance, if a farmer installs a buffer strip along the stream to try to keep nutrients from getting into the stream, the government will pay half the costs of the project.

“I think that educating farmers on the correct amount of fertilization, or fertilizers, they should use would help,” Brown said. “They’re just used to putting a certain amount of fertilizer on their cover crops, but then if the seeds don’t grow, they have all this extra fertilizer. [Farmers] just need to learn to apply it properly, or use natural fertilizers.”

In Ohio, Congress has given funds to the Great Lakes Restoration Initiative, which targets cleaning up toxins, combating invasive species, protecting watersheds from polluted runoff, restoring wetlands and other habitats, and tracking progress and working with strategic partners. Some of the $1.6 billion that Congress has given to the initiative has been put into creating wetlands, and educating farmers on ways to reduce fertilizer use and runoff. However, Ohio’s system also remains voluntary.

The voluntary system of controlling agricultural runoff that Iowa currently follows has proven to be incompetent, as at one point two summers ago, nitrate in Iowa’s Raccoon River reached 240 percent of the level allowed under the Clean Water Act. Additionally, half of Iowa’s waterways are polluted, according to Osterberg. Projected numbers for 2021, rating waterway’s water quality on a scale from “very poor” to “excellent,” show that there will still be a startling zero in the “excellent” water quality category among all waterways. Iowa is also one of three states in the Midwest that contribute 10-17 percent of the nitrogen share that is filtered through the Mississippi River to the Gulf of Mexico, according to Osterberg’s paper.

“Everybody thinks that you can only have voluntary programs. I accept that,” Osterberg said. “But you must voluntarily pick two strategies on your farm that will reduce pollution. I’m not going to tell you which ones…but the answer cannot be zero.”

The Iowa Soybean Association provides farmers with eight different practices, any one of which will reduce the amount of pollution coming from farmland. This strengthens Iowa’s control over farm polluters, requiring a voluntary choosing of two practices which makes the policy a combination of a voluntary action, and a mandate.

“I don’t think voluntary system alone will work. It just has little chance of working,” Osterberg said. “This, at least, would put most people in a better direction.”

In July of 2011,  Iowa adopted strong “antidegradation” standards. These standards are an often ignored part of the Clean Water Act, devised to keep unnecessary pollution out of still-clean waterways. It is a preventative measure that could potentially keep some of Iowa’s waters, and its future, clearer.

Chemicals from farm fertilizer and sediments from the agricultural process, although the most threatening, aren’t the only thing harming Iowa’s water, Brown reminds the community.

“Water pollution isn’t just fertilizers and chemicals going in, but also plastic and litter,” she said. “If you don’t litter, a lot of that litter won’t be blowing into the water, and then swept away.”

Water is one resource everything and everyone needs, people and animals alike.

“Not only is [reducing water pollution] going to help us, but it will help our neighbors,” Brown said. “We are all connected through rivers and waterways. We also want to help the wildlife and the ecosystems around us, because as soon as the ecosystems start to fall apart, you have major problems.”