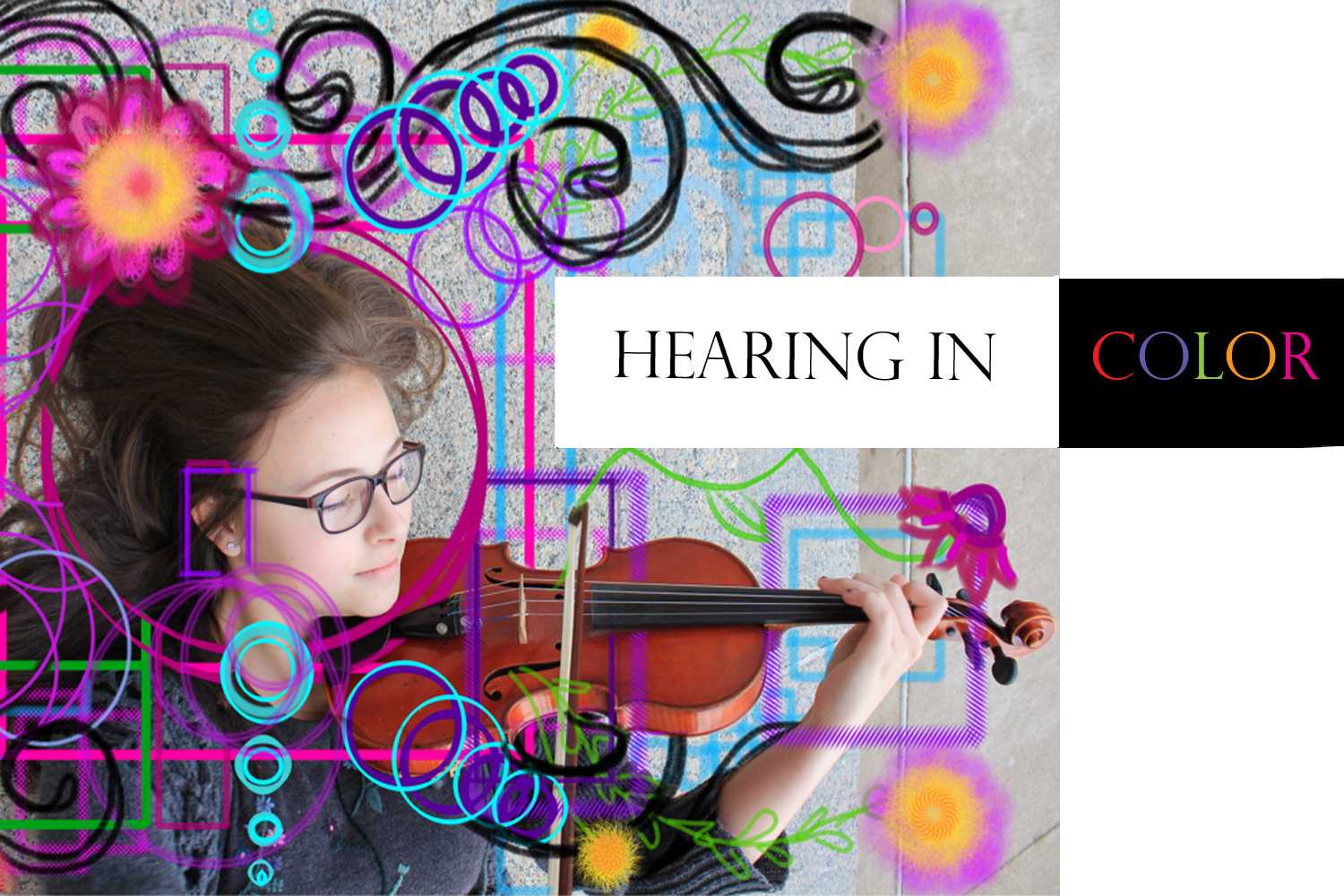 A Look into the Lives of City Synesthetes

Esmé Rummelhart had wanted to play violin since she first heard the sound of one at the age of two. When she finally started taking lessons at four years old, it came as a surprise that practicing frustrated her to the point of tears.

Rummelhart, like 1 in every 2,000 people, experiences a neurological phenomenon called synesthesia.  The word itself is derived from Ancient Greek, with “syn” meaning “together” or “merged,” and “aisthesa” meaning “sense.” Neurologists view it as a “cross wiring” of different parts of the brain, where the use of one sense triggers another. Rummelhart experiences what is called chromesthesia, which means that she sees colors and patterns in her head when she hears sounds and music.

“If you play [a note] separately, then I see it separately, but if it’s in a sequence, then that’s what I’m seeing,” Rummelhart said. “I like songs based on how interesting the movement of the notes is, and I think that’s what kind of makes music attractive.”

I could never draw it, because they’re not colors that exist”

While the colors and patterns that she sees are very real and vivid to her, Rummelhart can’t describe them in relatable terms. Her colors aren’t wavelengths of light, like the eyes perceive; they’re instead created by her brain.

“When I was little [my mom] would ask me what colors I saw, and I could never draw it, because they’re not colors that exist,” she said. “They’re changing and they’re different, they’re warm and they’re cool and they have to do with major or minor or if [the music] sounds happy or sad.”

“I associate colors with numbers, letters, and a lot of words. When I’m thinking, I’m always seeing what I’m thinking about,” Hoffman said. “If I’m listening to the alphabet song, I’ll see a different color for every letter, but for words it has to do with the sounds. Different people’s names or different words correspond with different colors.”

Hoffman believes that this connection helps her learn and make connections faster.

“Like when your English teacher tells you to visualize what you’re reading, I’m always doing that,” Hoffman said. “It’s not a big step for me to have to do that. It’s a lot quicker than having to go between thinking and seeing because it’s basically the same thing.” 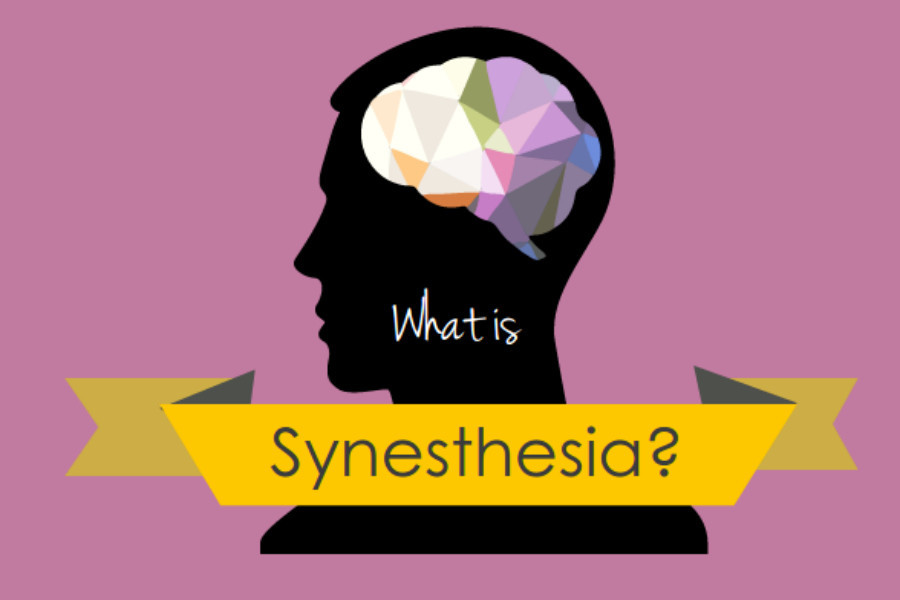 Gina Appleby ‘17, another student with grapheme-color synesthesia, also believes that her connections between colors and numbers have helped her with memorization.

“I was able to memorize multiplication tables and stuff like that more easily because I could associate the different colors,” Appleby said.

Rummelhart also thinks that her synesthesia has helped her in school and extracurriculars.

“I have wondered if it has helped me in school in other ways,” Rummelhart said. “But I think that in music it definitely has.”

Rummelhart has many memories of seeing and reading her patterns from an early age. This is common for people diagnosed with synesthesia. However,many synesthetes stop experiencing synesthesia as they age past childhood..

“When I was younger it was more prominent than it is now. Some people lose it completely as they grow up, but I hope that’s not the case,” she said. “With the music I play now, it’s a little more difficult to just rely on the pattern, even if you know the piece really well, because they’re harder.”

Rummelhart said that she didn’t understand that not everyone saw colors while listening to music, until her mom read about it and figured out that she had synesthesia. Appleby and Hoffman, however didn’t know about synesthesia until they read about it in 6th or 7th grade.

“I read The Mysterious Benedict Society and I was like, ‘Wait, everyone doesn’t have that?’” Hoffman said. “I thought everyone thought in the same way, but apparently that’s not the case.”

By identifying their synesthesia themselves, both Appleby and Hoffman faced skepticism from their parents. When Hoffman told her parents about her self-diagnosis, they were disbelieving at first. But after a visit to a professional who affirmed Hoffman’s suspicions, they became convinced.

“I just went to the doctor and they actually have these tests online. It’s really cool,” Hoffman said. “They have a box and it’s full of fives and twos. For normal people, it’s hard to differentiate between them, but when you have synesthesia, you have different numbers with different colors, so I’m just seeing green dots and pink dots. It’s really easy to differentiate.”

Although synesthesia has been studied and tested for over 100 years, little was known about it until recent decades, after the invention of brain imaging technology such as MRIs and PET scans. Despite these advances, finding new information about synesthesia is still difficult. This lack of information can pose a problem to those who have synesthesia and do not know how to treat its side effects. For Rummelhart, this means tolerating additional pain during the migraines she experiences.

“My migraines get really bad, to where I’ll throw up. When I have a migraine my speech gets impaired and affects the way I can talk. I get tongue tied,” Rummelhart said. “It affects your light sensitivity a lot, and your sense of smell. I don’t want to listen to music when I have a migraine, because it’s too stimulating, too overbearing. All of your senses just go out the window.”

Additionally, both Appleby and Rummelhart had some problems with confusing letters and numbers when they were first learning to read. This is another common problem of synesthetes.

“I used to mix up fours and sevens because they have similar colors,” Appleby said.

I feel like it’s an opportunity to extend what I’m thinking in another sense.”

For Hoffman, having synesthesia hasn’t caused any difficulties yet.

“I haven’t had any problems with it,” she said. “It’s not really an impairment, just a way of thinking that’s different. I’m glad I have it. I feel like it’s an opportunity to extend what I’m thinking in another sense.”