The recent passenger restriction law in Iowa diverges from most, as it leaves parents to decide whether or not to grant their children the privilege of having other teenage passengers. 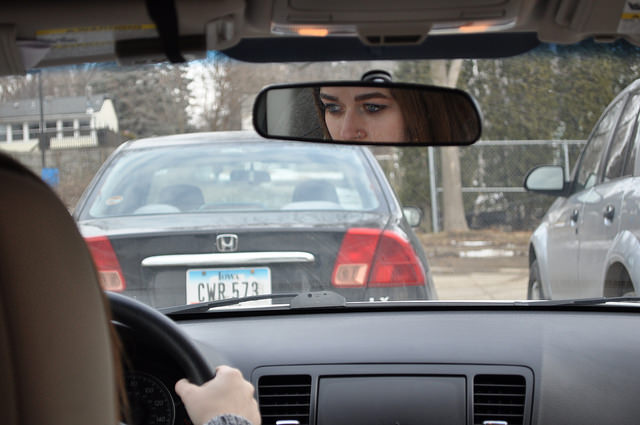 Estie Dillard '17 focuses before backing out of the lower parking lot.

As music rattles the seats, 4 teenagers set the interior of the car aglow with the light of cellphones. At the same moment the driver turns back to dampen the chaos in the back seat, shards of glass spray into the car, originating from the impact from another automobile suddenly face-to-face with the teen driver. The recent passenger restriction laws in effect in most states seek to prevent both teenage driver and passenger deaths in car crashes. However, Iowa’s version of the law has a unique twist: It is optional.

“Parents are allowed to request that it [the law] not apply to their teens. For that reason, some researchers argue that Iowa doesn’t even have a passenger restriction; Just a recommendation to parents that there should be a limit,” Dr. Robert Foss, the Senior Research Scientist and Director of the Center for the Study of Young Drivers at the University of North Carolina said. “One must ask what value a law against theft, speeding, or child abuse would have if part of the law said that a person’s family member is allowed to exempt one from the law.”

The rules of  the passenger restriction in Iowa can apply to teen drivers that have been issued their Intermediate License, which is available after turning 16 years old, and having completed driver’s education successfully.

Dennis Kleen, Fatal Analysis Reporting System manager at the Iowa Department of Transportation indicated that if parents want to have the passenger restriction applied to their child, the back of the license will say that they have a passenger restriction for the first 6 months that the new driver has an Intermediate License. This means that more than one minor passenger, that is not a relative, is not allowed.

Trust can be the determining factor in whether or not the parents of a new driver elects to have the passenger restriction in place.

“I didn’t [accept the passenger restriction] because I trust her. She’s a careful driver and I don’t think she would load the car full of people,” Nancy McCallister, parent of Payton McCallister ‘17 said. “I trusted her basically.” 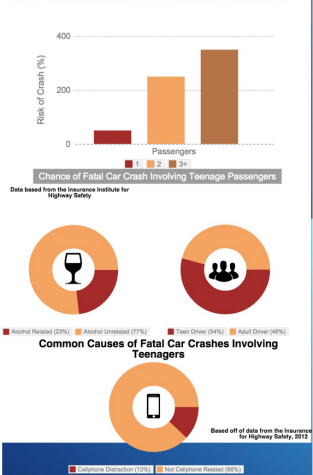 Gabe Gibbens ‘17 has had his license for 7 months, and his parents also opted not to have the passenger restriction in place, based on the same reasoning of trust.

“They trusted me enough to know that I’m going to be safe even if there are other people in the car,” Gibbens said.

Along with passengers, cell phones are frequently the cause of fatal deaths. According to the Insurance Institute for Highway Safety, 3,328 people died in car crashes involving a cell phone related distraction in 2012.

In 2010, Iowa became the 21st state to ban the usage of cellphones while driving. However, even when the cellphone is not being used, a simple buzz in the pocket may distract drivers. Various situations in the surroundings inside or outside the car may turn into distractions as well.

“Things that distract me are usually changing the music station, if my phone makes a sound or buzzes, like someone is communicating with me, or if someone calls me when driving,” Gibbens said. “If I get mad at someone on the road, I focus too much on them, rather than just focusing on myself.”

Another law that has been put in place by the the Iowa Department of Transportation reinforces safely gaining driving skills with an adult prior to getting a license.

“Iowa now requires you to have held an Instruction Permit for at least 12 months prior to moving to an Intermediate License,” Kleen said. “This was to get young drivers more experience before driving unaccompanied and practice driving in all 4 seasons in Iowa.” 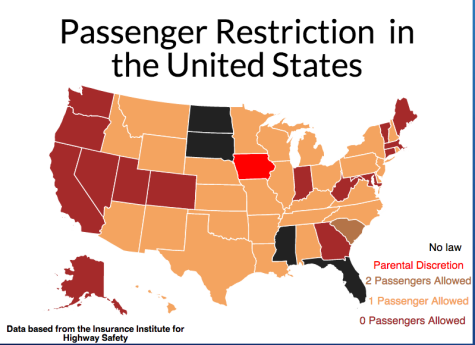 As reported by the Iowa Department of Transportation, the chance of the crash goes up 50% with just one passenger, 250% for 2 passengers, and more than 350% for 3 or more passengers. This research evoked the passenger restriction laws, that are in place in 47 states, including Washington, D.C.

“Because having passengers is particularly risky, nearly all states now restrict intermediate drivers for 6-12 months after they begin driving without adult accompaniment. The night restriction on intermediate drivers is for the same reason; Night driving is more dangerous, so people still early in the process of learning to drive should avoid it,” Dr. Foss said. “The restriction has [lowed the number of teen deaths], but it’s difficult to know just how much. The reason is that GDL (Graduated Driver’s License) licensing systems include several parts and it’s hard to know how much effect each element has on crashes, injuries and deaths.”

As new laws are passed, along with them comes new consequences for not following the laws in place for safety reasons.

According to Iowa law, the punishment for violating the restriction can result in a citation by police, which may result in additional restrictions, or a suspension of driving privileges. The twelve month violation free period will also restart. Having a clean driving record for 12 months is required before moving up to a full license as well.

93% of Iowan parents opted not to have the passenger restriction for their child, revealing that making a law optional may not have the most desirable outcome for driving researchers, but leaves full responsibility to parents to decide what the ideal situation is for their children to gain independent driving experience.

“I feel that if you have the restriction on your license and your parents put it there, then you should always follow it because your parents know what is best for you,” Gibbens said.