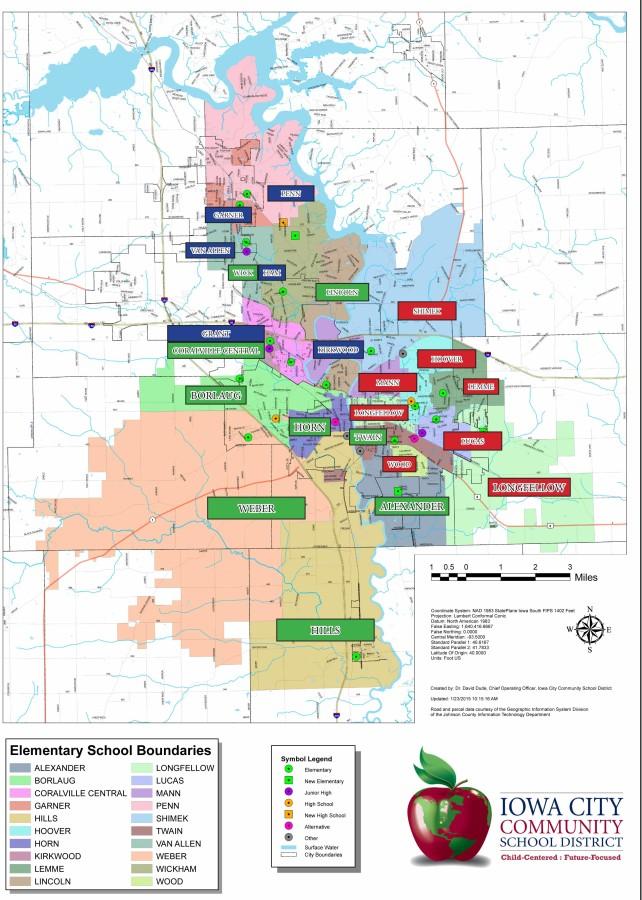 Ayla Canin ‘17 spent her childhood full of West High pride. However, in sixth grade she was told that instead of attending West High, as she expected, she would switch sides of town and attend City High instead. With the new Liberty High School opening its doors in the fall of 2017, the Iowa City Community School District is looking for ways to minimize transitions such as the one Canin faced, as well as create equality across the city’s high schools

“I was kind of weirded out and annoyed because I’d spent my whole life being told like ‘West is the best, go to West!’” Canin said of when she was told about the change of plan. “And now I was being told ‘No, you’re going to City,’ and I didn’t have a choice, and that pissed me off.”

Starting this month, the ICCSD will work on mapping out attendance zones for the soon to be three comprehensive high schools in Iowa City.

“Now that we are moving forward with the high school and we know that part of it will open in 2017, then the question becomes who is going to go there.” Superintendent Steve Murley said. “So the next step in that process is for us to work with the board and come up with some boundaries that we think are as equitable as possible, given our student population.”

As the new high school’s future is being decided there is some speculation as to how the district’s current high schools will get involved.

“The big picture for the district is to have 3 new high schools with equal populations,” City High principal John Bacon said. “However how we grow in to that, the transition plan, is still to be determined.”

The District is going into this process with several criteria in mind. These include attendance zones that are geographically compact, as well as socio economically equal. The balancing of those two factors is one of the main difficulties the ICCSD faces, according to Murley.

“We’ve got some pockets of very high poverty and very low poverty in the district and they’re not evenly distributed throughout the district, so when we draw attendance zones it’s not as easy as just saying ‘here’s the most geographically compact zone that has 1000 kids in each of the attendance areas.’” Murley said. “We’re unlikely to get well balanced populations if we do that, so we’ll have to do a little bit of work around that to try and get a well balanced population that is as geographically compact as possible.

We’ll have to do a little bit of work to try and get a well balanced population that is as geographically compact as possible.”

City High wants to stay involved in the decisions of equal redistricting, since the policy directly impacts the environment of the school.

“It’s important we strive for balance between the new high schools whether that’s in terms of enrollment or socioeconomic makeup,” Bacon said. “I think it’s really important to be a part of those conversations the district has.”

With the Iowa Department of Education deciding that the ICCSD cannot enforce its diversity policy this past December, the District is looking for other ways to provide an equal education to all members of the Iowa City community.

“On one hand, socioeconomic balance is still a key consideration,” School Board President Chris Lynch said. “It’s not that FRL can’t be used at all, it just can’t be used in the level of detail that we’ve used it.”

In the past, the ICCSD looked at FRL numbers, or the number of kids that qualify for free and reduced lunch, as a way of measuring poverty. The District utilized several tools, such as FRL heat maps and multiple scenarios with FRL numbers, in the effort to create socio economically balanced schools.

The ICCSD is also taking steps to provide kids with a uniform experience their whole way through their schooling. In other words, that they would travel from school to the next level of schooling with the same group. This would minimize transitions that students like Canin experienced.

“I think it takes a little bit longer to make friends if you didn’t go to South East. I was kind of quiet last year, reserved, and people had already sort of split into friend groups,” Canin said. “I wouldn’t undo it, but I do think that I would’ve had an easier time if I’d gone to South East”

The District’s goal is to have each high school consist of roughly 1,500 students.

“This range is effective because it allows us to have all the programing, course offerings, and activities that you would expect to see at a large high school without being so large that it’s hard to know each other and have a personal touch,” Bacon said.

As the new high school transitions into independence, questions have been raised in regards to athletic teams through the new school and possible athletic team collaboration between the schools.

“Over the years I’ve learned the quality of a school’s athletic teams is most reflective of the quality of coaching, not school size.” West High principal Jerry Arganbright said. “Just like our classrooms, having great adult leaders is the primary determiner for what our students instructionally receive and subsequently achieve.”

The ICCSD is also looking at ways to manage the difficulty of a number of different schools coming online in quick succession, as outlined in the Facilities Master Plan that was put together last fall.

The School District will continue discussing the new high school throughout the spring and will work to have a draft of attendance zones ready.

“Once we’ve done that we will go out to the public and to the School Board and have them take a look at it and share their thoughts and comments,” Murley said. “Hopefully through that process of back and forth we will actually have some attendance zones for the board to vote on before the end of the school year.”