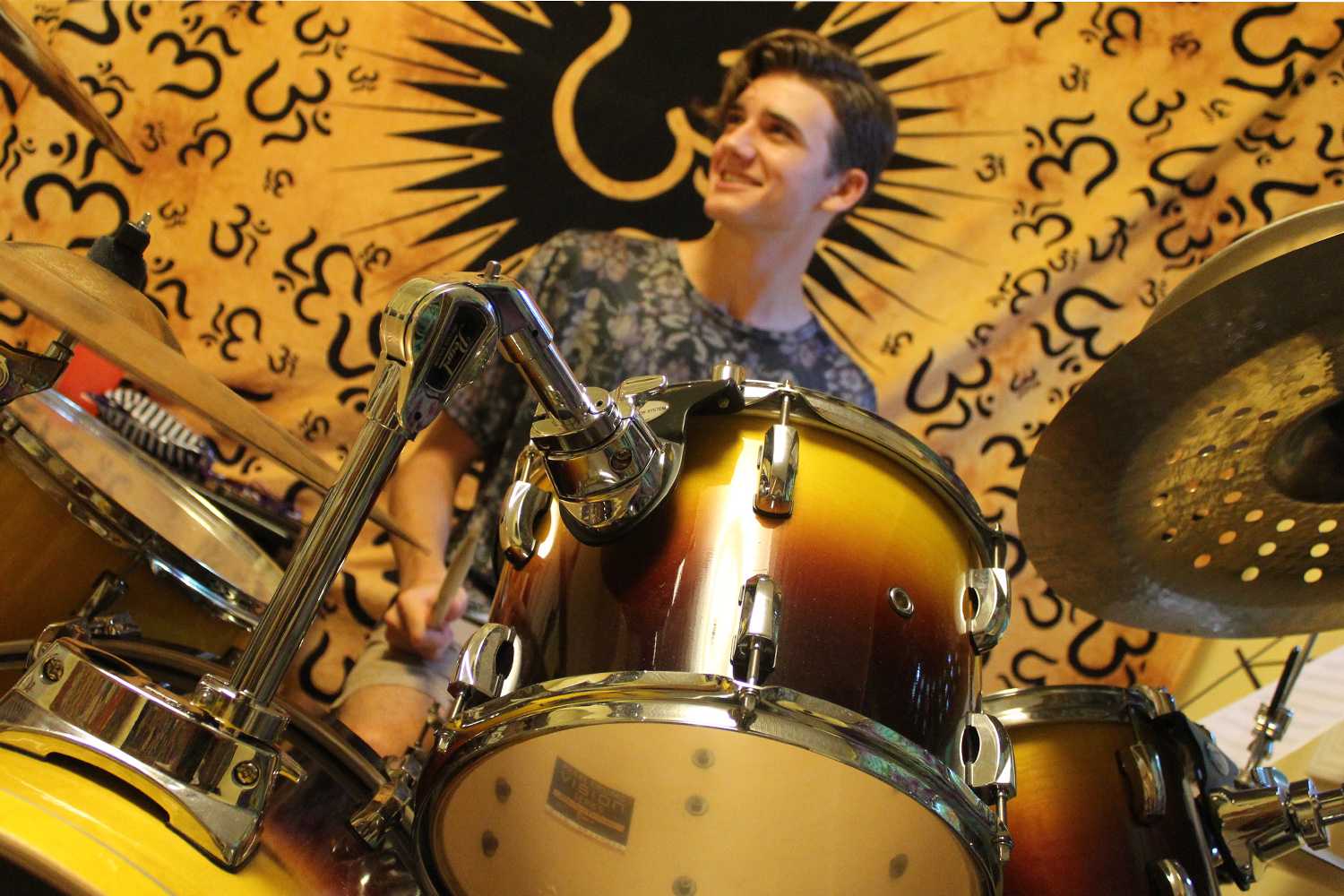 Marching to the Beat of His Own Drum

Phinny Brady ‘17 is bringing his distinctive style of music to City High.

Feet pounding the bass pedal, brow furrowed in intense focus, Phinny Brady ‘17 locks in on his drumming with unwavering concentration. For Brady, drumming is not just a passion, but a study.

“I specifically like experimenting with more advanced and complex rhythmic ideas,” Brady explained. “I’m into progressive music, which deals with a lot of odd groupings, poly meters, poly groupings, things that are very challenging to the mind.”

Brady began his musical odyssey six years ago, when he was first introduced to the instrument.

“I was at my friend’s house and his dad had a drumset. I got on there, and I felt it you know, something inside me was emerging into those drums,” Brady said, “So I knew that would be my music of choice.”

Brady began investing both time and money towards his new instrument, and soon was a committed musician.

“When Phinny turned 12, he asked us if we would help him buy a drum kit for his birthday,” Tundi Brady, Phinny’s mother, began. “We paid half and he emptied his entire life savings to pay for his half.”

Soon after Brady purchased a drum set of his own, he began taking lessons. His dedication to drums combined with his previous musical background in piano and guitar helped him quickly adapt to his new instrument.

“Our role as parents has primarily been to soundproof a room in our basement,” Tundi explained. “Other than that, we just signed all our kids up for piano when they were young. From there, Phinny has been completely self-driven with his music.”

Phinny is probably the most talented one in the band”

Brady is currently devoting his musical focus to his new band, Wheelgrass. Brady joined the band earlier this summer, and has since been a vital part of its success. He explains that Wheelgrass has a hard time pinning themselves to one genre. Rather, they like to work with multiple genres such as surf, punk, and noise rock.

“We play something on the spectrum of laidback surf stuff, to a little bit faster upbeat punk,” Brady explained.

The band emerged from a friendship between Brady and the lead guitarist, Nick Dearberg ‘16.

“I knew Nick from West High choir, he’s a good friend of mine” Brady said, “so one time he asked me to fill in for their drummer, and it all kinda worked out.”

Before Brady joined the band, Dearberg and their bassist Jaron Lamp ‘16 would often use an automated drum program to lay a beat. Now, with a drummer like Brady, they’re able to perform more complex music. 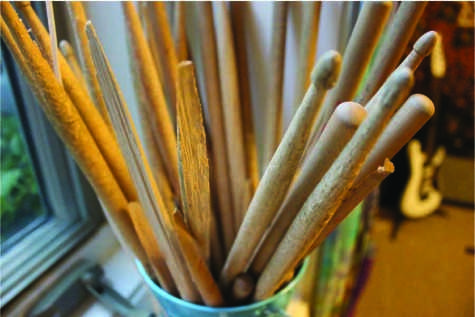 “Phinny is probably the most talented one in the band,” Dearberg said, “and without his drumming it’s just kinda bland.”

“I was curious on how Phinny would play with his particular style because I knew he was into progressive rock kind of stuff,” Dearberg said. “But he brought this special element that we had been lacking.”

For Brady, performance comes naturally. He has played in countless shows for both the West High show choir combo and jazz band.

“I used to get nervous before jazz band in 7th grade, [Brady sarcastically calls those 7th grade shows “big life performances”] but I think I’ve gotten so used to being onstage, I’m kinda over that by now,” Brady said.

The confidence built over his musical career means Brady gets onstage, he lets his emotions run the show.

“Right now I think playing live gets to a point you’re more in it as far as the experience goes,” Brady explained, “Onstage you definitely get into the musicianship of it, you have a good time and feel the energy.”

Along with his interest in performance, Brady has also been pursuing musical composition.

Onstage you definitely get into the musicianship of it, you have a good time and feel the energy.”

“For Phinny, composing music just seemed like part of being involved with learning a musical instrument,” Tundi said, “when he was taking piano lessons as a little guy, he would make up tunes then as well.”

Brady works extensively with the musical production software Reason. He composes his own music on Reason, and experiments with different musical styles within the program.

“Having those skills I can just have a home studio and make music on my own,” Brady explained.

While the music Brady enjoys is often difficult to produce and publish, he is determined to find a way to keep the music he most enjoys in central in his life.

“You know everyone wants to make it in a band, but I do find that a little idealistic,” Brady admitted. “I think as far as the next couple years, I’ll be sticking by myself for the stuff I’m really passionate about.”