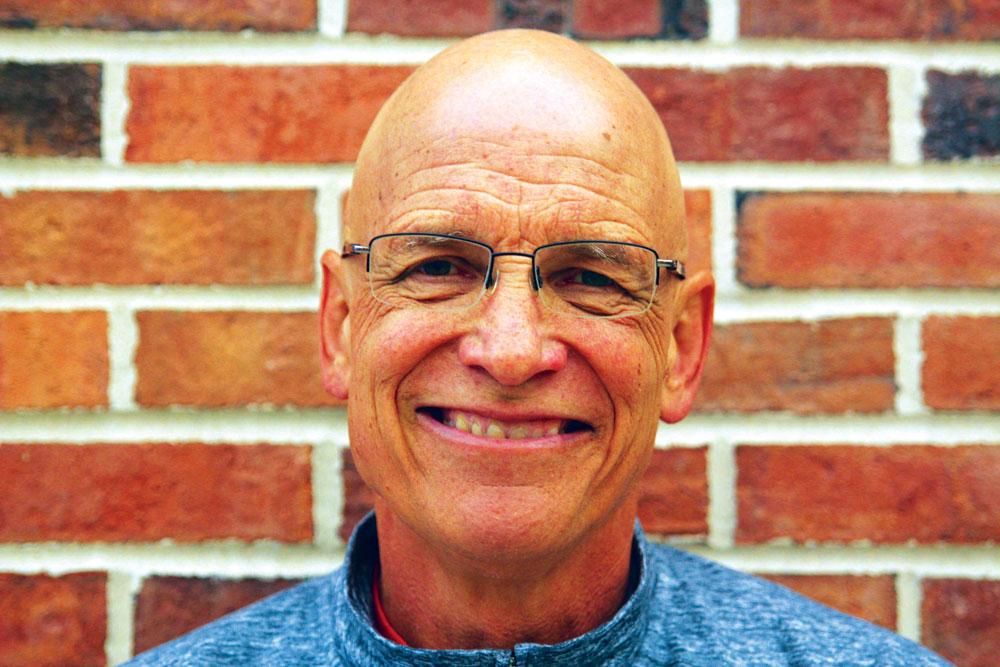 Mittman has been a runner for most of his life, and saw coaching as a natural progression. (Innes Hicsasmaz)

Mittman has been a runner for most of his life, and saw coaching as a natural progression.

Runner with a Cause

Tom Mittman, a man who has dedicated his life to saving lives, is now faced with his own illness - and his struggle has inspired an entire team.

These are the words that first come to mind when the cross country team thinks of Tom Mittman. Now, after a decades-long career as a coach of the girls’ cross country team, Mittman faces his biggest challenge yet: cancer.

“People talk about fighting cancer. I don’t really look at it like that. I’ve got a disease, it may or may not kill me. I don’t plan on it doing that,” Mittman said. “We know that we’re all terminal. What this did to me was it was a wake-up call. A reminder.”

Born in Eugene, Oregon, Mittman grew up in one of the most running-saturated environments in the US. He enjoyed a lot of success as a young runner. As a senior in high school, his cross country team won the state meet, with Mittman being the tiebreaker.

“I loved running,” Mittman said. “I just loved the way it made me feel, so I always planned to do it.”

A runner for more than 40 years, Mittman joined the City High program in 1997 and has coached the girls’ cross country team to four state championships.

“I always wanted to be a coach,” he said. “When I went to college in 1971 the two things I wanted were to teach to English and coach whatever.”

There are frustrations on occasion, but coming here to coach has been a highlight of my adult life.”

However, Mittman’s college experience didn’t turn out the way he expected. While he had loved his high school English classes, in college he gravitated towards the sciences, specifically biology. After one year at grad school, Mittman headed off to medical school.

“I always thought I can go back and do my teaching later, but I’ll probably never have another chance at this,” Mittman said. “Which wasn’t true, as it turned out, but it’s hard once you get on that track to go back.”

Mittman and his wife moved to Iowa so that he could complete his family practice residency and she could go to graduate school at the University of Iowa. After completing his residency at Mercy Hospital, Mittman started out in an emergency room in Keokuk, Iowa.

“You never know what’s going to come in the door in a little town’s ER. There’s not a lot of backup,” he said.

Mittman soon took a position in a trauma center in Davenport.

“That was pretty stressful. After a couple years of that and after the program director tried to kill himself I decided to go back to school,” he said. “I decided that it wasn’t for me. The stress was significant. I really wasn’t trained for that.”

Mittman did eventually get his teaching certificate. After three semesters of education credits and student-teaching at Mid-Prairie in 1990, a job opened up in the ER at Mercy Hospital in Iowa City, where he worked until he retired this past year.

“I always went to the ER hoping to get there a minute before my shift and would come to practice with a big smile on my face, anxious to get here. I loved coming to coach every day,” Mittman said. “There may be an occasional day or two where it’s hard. There are frustrations on occasion, but coming here to coach has been a highlight of my adult life.”

While Mittman always knew he wanted to coach, coaching girls was never something he expected.

“I have two sisters, so I know something about females, but adolescent women were not something that I was particularly familiar with,” he said. “Girls are delightful to coach. They’re different. Not totally different, but different in interesting ways.”

In his years of coaching, Mittman has found that boys and girls respond differently to criticism, and that girls are often anxious to please and to do well.

“I had to learn if I told a girl five things that she did well during a race and told her one thing she didn’t, it would mean that I didn’t think that she ran a good race. No!” Mittman said. “I yell, obviously, but I try not to be negative when I yell. I try to yell encouragement all the time.” 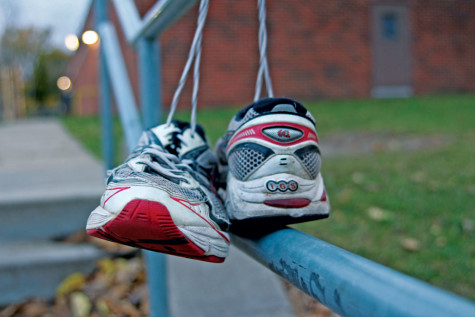 “I feel like Tom tries to point out when you do well,” Verdick said. “He’s a very intense person, but in a good way.”

Cornell agrees, noting that Mittman really gets to know members of the team in order to coach them.

“I think that Tom definitely wants to push you as much as he can and as much as you can push yourself,” Cornell said. “But he also knows what’s reasonable.”

Assistant Coach Thos Trefz adds that while he and Mittman may disagree on small details, overall they see things quite similarly.

“Tom’s coaching style is very athlete-centered and he really cares about the athlete as a whole person,” he said. “It’s not so much about the workouts as it is about developing the whole student-athlete as a person first.”

Verdick credits Mittman with convincing her to join the cross country team her freshman year, instead of continuing with volleyball.

“I think he’s probably one of the reasons why I’m in cross country, because he ran with me almost every day of the summer and made sure that I got good runs in and made me feel like I belonged, like I mattered,” Verdick said. “At the end of the summer I felt like I had put so much work into it and Tom had put so much work into me that I couldn’t not do cross country, and it’s always been like that.”

This summer, Mittman was diagnosed with anaplastic T-cell lymphoma, a rare form of cancer that affects white blood cells. He had known something was wrong when even after losing weight, exercising didn’t get any easier. Other symptoms included stomach queasiness, night sweats, and strange abdominal aches and pains radiating to his back and shoulders. When tests for gallstones, ulcers, and gallbladder disease turned up negative, a CT scan was ordered.

“I had a pretty good idea that something more significant was going on, probably a malignancy,” Mittman said. “I didn’t know what kind.”

I’m the only person to have an abdominal biopsy done without anesthesia at Mercy. I didn’t want drugs so I could go to practice that afternoon.”

The CT scan showed abnormal lymph nodes in his abdomen, and a biopsy showed that 90% were cancerous.

“I’m the only person to have an abdominal biopsy done without anesthesia at Mercy. I didn’t want drugs so I could go to practice that afternoon,” Mittman said.

Mittman waited almost a week before telling his team, and the news of his diagnosis hit coaches and runners hard.

“It’s just a shock, and it’s not something you want to hear about anybody, least of all someone like Tom,” Trefz said.

Instead of running with the team, as he has done in the past, Mittman now bikes around during practices and at meets, which allows him to see the girls at multiple points during a race.

Mittman’s illness has served as an inspiration to the team this season. Cornell, especially, has noticed herself pushing a little harder during races since hearing his diagnosis.

“This year, I’ve noticed that I have this thought sometimes when I’m really hurting during a race, like ‘Tom just had chemo a couple days ago,’” Cornell said. “And he’s riding on his bike, uphill, and I think that I have to go slower.”

To show their support for their coach, the team made shirts that read “Miles for Mittman,” and were green, the color for non-Hodgkin’s lymphoma. The team decided to wear its Miles for Mittman t-shirts for the MVC Divisional Meet.

“I was thinking how special it is to have somebody that we can dedicate our run to,” Cornell said. “I feel like we all had a little something extra to motivate us. It wasn’t just, ‘Do it! Run because it’s going to be great!’ It was, ‘Run, because we have this person that really wants us to, and that has sacrificed a lot for us.’”

Mittman has attended every practice and every meet this season, despite the effects of his treatment. The most common side effects Mittman experiences are general weakness, neuropathy, headaches, and some nausea.

While the girls’ cross country team has achieved many things this season, notably a second straight MVC Championship and a 28th consecutive trip to the state cross country meet, Mittman is hesitant to chalk up his team’s success to anything related to himself.

“I didn’t want the season to be about me, I wanted it to be about how good we were going to be, and we were,” he said. “I think for the most part it’s just been a great season because we have a great team. We’ve had great leadership from our seniors, we’ve had kids who are enthusiastic about working and trying hard at all levels, and everyone has positive mental attitudes.”

Mittman’s cancer could be fatal, but even as he faces a life-threatening illness, he is the epitome of positivity.

“Life is a terminal disease. We get sidetracked and we think it’s not going to happen to us,” he said. “I know it can happen at any time, especially at 62, so I feel like it was a wake-up call to be grateful for all the wonderful things that happened in my life.”

With a loving wife, three healthy sons, and grandchildren, Mittman sees his blessings as abundant.

Loud. Sweaty. Weirdly tan. Intense, empowering, and dedicated. The words that people use to describe Mittman reflect the impact he has had on their lives.

“If I am fortunate enough to have this go into remission and live many, many more years, I hope that I remember how I feel now,” he said. “If I survive this initially, in some ways it may be the best thing that’s happened to me.”