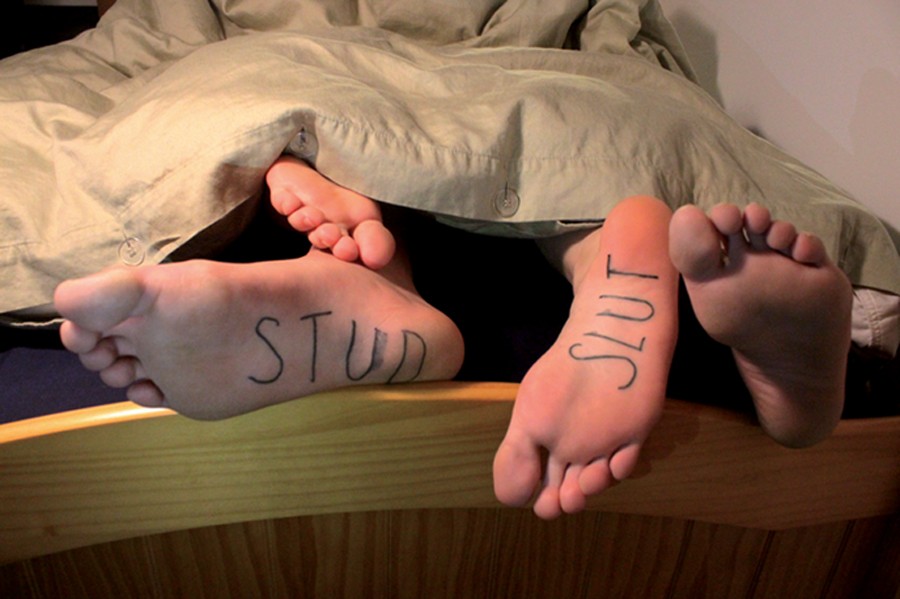 Fallacy- a mistaken belief, especially one based on unsound argument. Both boys and girls have sexual awakenings and both girls and boys grow up to lead sexually active lives. So why is it that boys and girls are treated so differently for going through the same process?

Throughout history, women have been denied personal liberties in love. Some cultures don’t allow women to choose their husbands, some allow husbands to have multiple wives, and some even measure a woman’s value based solely on her virginity. Though these practices are not as prevalent in America today, many people across the country, and even here at City High, feel the effects daily.

“Virginity is seen as this very pure idea of ‘your life is completely different after you have sex,’ and that if you have sex, you’re giving something away, which is just absolutely not the case,” Emma Arp ‘17 said. “If you look at [virginity] in most societies, it’s used pretty negatively. We oftentimes think it’s okay for a guy to not be a virgin but not for a girl to be [not a virgin]. Personally, I don’t think that virginity is really real because if you’re judging it by whether or not a hymen is popped, I mean, it can be popped otherwise. Virginity is not real, it’s just a concept created as another thing that men can have power over a woman with.”

Not only in the sense of sex, but even in the sense of romance, men have historically been held to a standard of power and heroism. Consider the last James Bond movie and notice how the leading ladies are frequently in need of rescuing and James Bond’s sultry caress. Men have been taught that it is their responsibility to make the first move and that it’s up to them to save the damsel in distress.

“[Double standards] just came from tradition where the guy is ‘in power’ and the girl needs to be ‘the prize.’ There is just this idea that the girl should be more reserved for someone and the guy can do whatever,” Jim McMillan ‘17 said. “I feel like there is a different expectation for the way girls are ‘supposed’ to act as opposed to guys. There are different stereotypes that they have to deal with.”

Virginity is not real, it’s just a concept created as another thing that men can have power over a woman with.”

Arp challenges these stereotypes by asking two questions: How is it any different for a girl to engage in multiple physical relationships than a guy to? And why is she treated entirely different by doing so?

“I think sometimes people think about a guy [having sex] and their reaction is, ‘Oh, he’s a player,’” Arp said. “If a girl has lots of sex or lots of boyfriends, it’s, ‘Oh she’s just such a whore,’ or, ‘She sleeps around,’ but if a guy does the same thing it’s obviously just not as scrutinized.”

McMillan agrees that our culture holds men and women to a different standard for sex and relationships.

“People just don’t look at [girls having sex] the same way as they would when a guy does it. A guy having a lot of sex is more deemed as ‘he’s gettin’ it,’ or it makes him seem powerful,” McMillan said. “It’s not the same, even though they are doing the exact same thing, just that it’s a girl, not a guy. I think that it’s very unfair to girls because they aren’t doing anything differently than a guy would.”

Both Arp and McMillan believe that society brushes off a guy’s hormones as normal in books, TV, and magazines. However, a woman’s sexuality is rarely discussed, and because of this, sex seems like a much bigger deal when it actually occurs.

“Everyone knows that when a guy is aroused, his penis gets erect. But I never knew that when a girl gets aroused, she gets wet,” Arp said. “In health class, a lot was more based on learning about the male body and male sexuality, more than female.”

Women’s rights and equality are especially prevalent topics as we head towards the presidential election this fall. Presidential candidate Hillary Clinton has at times faced criticism or has been treated differently based on her gender, with interviewers asking her about her hair stylist instead of her foreign policy, and, on a few occasions, blaming her for the adultery of her husband. However, she has also been extremely successful as a politician, especially as one of only eighteen female candidates to have ever run for the presidency of the United States.

“I think this goes back to probably when America was founded by men,” Nysio Poulakos ‘17 said. “Men have always had power in society, which I would say is evening out, or starting to. Men are the top of the social pyramid; they control it.”

Men have always had power in society, which I would say is evening out, or starting to.”

Historically, men have had more power than women in Western culture, whether it be over something as large as a country or something as small as a sports team, but this does not grant them immunity from scrutiny over their sexual exploits. With so much focus on the more widespread objectification of females, it’s easy to forget about the pressures placed on men and boys with regard to sex. In some cases, men are referred to as “players” in derogatory context. Arp, however, argues that these instances occur far less often than they do for women.

“Obviously yes, there are cases of guys being pressured into sex, but I think oftentimes it’s pressure from the guy,” Arp said. “I think sometimes boys are taught that the end goal is so worth it, like sex is so worth it that they’re only focused on that one thing, and that to have a girl say no, or to have a girl not be as into it as they are, isn’t as thought of.”

While men tend to have looser guidelines for sexual relationships, McMillan feels that the thought of a man looking for a relationship that isn’t purely physical is often overlooked.

“I do think that guys should take [sex] more seriously. I definitely think it’s something that should be valued by both girls and boys,” McMillan said. “There is a stereotype that guys disregard a girl’s feelings in [sexual] situations, but I actually think there are more guys out there who care more [about a relationship] than one might think. However, society does tend to display women as objects, which I think is a terrible thing.”

Poulakos and McMillan agree that sex should be taken more seriously in all circumstances.

“It seems like sex is a bigger deal for girls and it’s more casual for guys. Just based on an emotional perspective, but that’s not the way I think it should be,” Poulakos said. “People should be able to do whatever they want as long as both people are comfortable with doing it.”

Arp doesn’t see a problem with how people tend to handle their own relationships; rather, she takes issue with the ways individuals might judge other people for their romantic and sexual activities.

Girls need to be taught that they’re important, smart, and needed.”

“I think girls shame girls for having a lot of sex, and I think boys shame girls for having a lot of sex. Boys are expected to be horny and teenagers and ‘they’re just being boys,’ but for girls, if you’re pressured into sex, especially if it’s ‘getting your virginity taken,’ then it’s considered a much bigger deal,” Arp said. “It just isn’t the same for guys. People could be like ‘Oh, he’s such a player,’ but I’ve never really heard someone be like, ‘Oh my god he sleeps around. Slut!’ I’ve never heard that. And there’s not a derogatory name for a man who has a lot of sex.”

Times are changing. Especially in music and television. Seventy years ago, popular songs like “Baby It’s Cold Outside”, a song full of male domination with female verses like “Say, what’s in this drink?” dominated the airwaves. Now, major female music artists, like Beyoncé or Lily Allen, preach feminism, or equality of the sexes, through major media outlets. Even Disney is beginning to defy the trend of men in control. In 2013, Disney’s “Frozen” was released, with a plot that resolved through a story of familial love between two sisters, disregarding the traditional boy- saves- girl trope. Women still have a long way to go to achieve equal representation in the media, though, Arp argues.

“Girls are completely sexualized in the media. Girls are taught that their sole purpose is to be sexual objects. Breasts are treated as sexual objects, not a necessity for human life. Breasts should be allowed to be shown on TV, they should be normalized, and accepted,” Arp said. “Girls shouldn’t be taught that the only characters in in movies and books who are women are there for a romantic plot, or to seduce a bad guy. Girls need to be taught that they’re important, smart, and needed.”