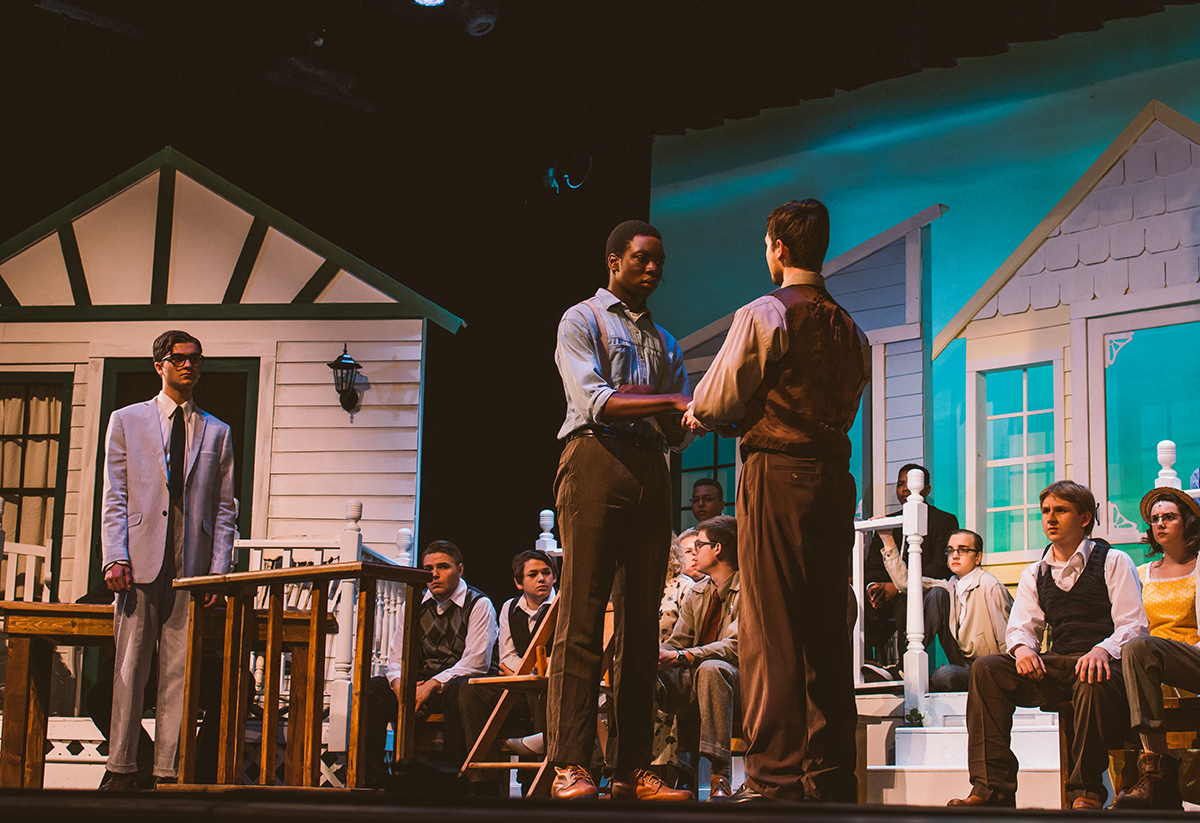 A Performance of Poise and Power

An uncomfortable silence hangs in the air as the cast of City High’s fall play sits in a circle, quietly absorbing the information just given to them by their director, English teacher Troy Peters. The cast is of the production To Kill A Mockingbird, and the information in question is that the director has made the decision not to censor the time appropriate language that has deemed the book banned, or had its themes challenged, in over 15 states in the US since it’s release in 1960.

This decision in Peters’ directing caused a stir with the white members of the cast, many of whom are openly uncomfortable with saying the N-word. A new layer to the discussion over how to go about approaching the subject was added with the cast members of color joining in on the conversation, many of whom made their stage debut in the production.

“I don’t agree with the N-word and where it came from, but I don’t think it should be taken out,” Sameer Ali ‘17 said. “It’s there for a reason; it’s an element of the time, and it’s a very strong word. It’s like the same thing with cursing- I think if it’s there, it’s there for a reason.” Ali plays Judge Taylor in his first production at City.

Some members of the cast feel less strongly about the decision to leave the show uncensored. When asked about members of the cast in some cases shouting the word, newcomer to the stage Fiston Namutchibwe ‘17, who plays Reverend Sykes, laughed lightly and said, “It’s not that bad. I mean, we know that they have good intentions, and they wouldn’t say it in a wrong manner, but yeah, it’s alright.” 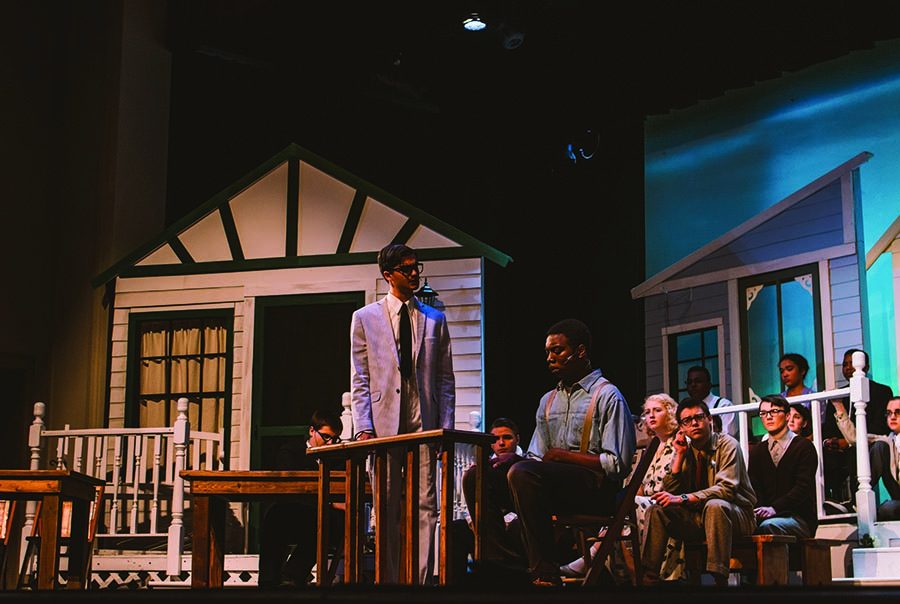 At the other end of the spectrum, Jessie Shaw ‘17 feels strongly about the use of the word.

“I know that it’s important to use it, but every time I hear it it feels like getting shot in the chest or punched in the stomach,” Shaw said, “Especially because it’s being said by people who are my friends.”

Shaw plays Helen Robinson, the wife of the falsely accused rape suspect and protagonist Tom Robinson. Shaw goes on to say that while she understands that her friends would never use the word in real life situations, she notes that “sometimes it’s hard to distance them from their character.”

It’s no secret that To Kill A Mockingbird stepped outside the realm of City High’s usual program. The show is the most diverse in five years; the last fall play with any person/ people of color roles written into the script was Mayberry in 2011, another show that dealt directly with the issues of race. For many in the cast, To Kill A Mockingbird came at just the right time.

“It’s very timely, really, there’s no better time to do it than now,” AJ Boulund ‘17 said. “Tensions are really flaring, there’s a lot of horribleness going on, discrimination, and unjust killings.It happens in the 1930’s and it’s happening today.”

“It’s definitely a tough show to do no matter when you do it, but I think it’s really powerful to do it now.””

“I think it’s definitely a tough show to do no matter when you do it, but I think it’s powerful to do now,” Ali said. “I think it will be great social commentary because a big part of the book and the play is questioning why people do what they do, and with this, I think by watching, a lot of people will be asking themselves the same question.”

Making her City High stage debut as Calpurnia, the mother figure to the Finch children is junior Jessica Sheffield, who answered the question of the show’s importance.

“I think it is [an important show] especially after this summer,” Sheffield ‘18 said. “I also think it’s really powerful that we are doing this as high-schoolers because I don’t think a lot of schools would allow their students to do this. We are doing it at a very prominent time because, unfortunately, these are still prevalent issues in our society today.”

There is a standout scene in To Kill A Mockingbird which holds the audience in rapture and showcases arguably the most important themes of the show. The scene takes place in the courthouse during the trial of Tom Robinson, and strikes a personal chord with more than a few members of the person-of-color cast.

“It’s terrible [to watch the trial], especially because the guy who plays Tom Robinson is one of my best friends,” Shaw said. “It’s hard to watch him be discriminated against when all the evidence shows that Tom Robinson didn’t do it, and the only reason he’s convicted is because he’s black. It’s honestly kind of painful to watch happen.”

Sheffield, agreeing with Shaw, said, “I feel uncomfortable because when we are all in character it seems very believable. There’s a point where I have a line after Tom Robinson is found guilty, and I’m really upset, and I find myself almost tearing up, and it’s genuine.”

The importance of the courthouse scene holds up in comparison to both the book and the movie, though there is much more emphasis placed on the storyline of Tom Robinson.

Amadou Sanogo ‘18, made his transition from behind the scenes as a member of crew to center stage to play the role of Tom. “I feel humbled by the experience and I’m happy that I get to play this part and show how it was so different back then,” Sanogo said.

I feel uncomfortable because when we are all in character it seems very believable. There’s a point where I have a line after Tom Robinson is found guilty, and I’m really upset, and I find myself almost tearing up, and it’s genuine.”

Some members of the cast feel that Atticus Finch, the lawyer selected to defend Tom Robinson, has a helping spirit and significant lack of racism in both the book and the play that contribute greatly to the powerful moral of the story and make him the most important character in the show.

“Even though the story is about Scout, and it’s through her eyes as a kid and as an adult, it’s really about the prejudice of the town and how [Atticus] deals with it and how he channels that into his kids and how he’s helping them to grow up,” Keaton Scandrett ‘18 said. “It’s really showing the racism through him and how he’s dealing with it in his job versus in his home life.” Scandrett plays Scout Finch in her first lead role at City High.

Sheffield argued, “In the book Boo [holds the most importance], but in the play it’s Tom Robinson, because the courtroom scene is one of the longest in the play, and it’s all about him and the decisions that the town thinks he made even though he didn’t.”

Ali believes that through the lens of Scout Finch, the audience has a clearer understanding of the racist themes.

“By having a child, and by having her innocence, her youth, not knowing why things are happening,” Ali said, “And then being able to talk about it through her perspective makes it very powerful.”

Boulund took a different approach; according to the seasoned actor, “There are three mockingbirds, actually: there’s Tom Robinson, there’s Boo Radley, and there’s Mayella Ewell. Those are mockingbirds. A mockingbird is someone whose innocence is taken away for unjust reasons,” Boulund said. “This is 9th grade English I’m trying to remember: Tom Robinson–he’s innocent, but he’s still found guilty and killed; Mayella Ewell–she didn’t mean to get in all this trouble, but her father saw her, and her father is making her convict Tom, who’s like the only guy who’s ever been nice to her, so Bob Ewell’s really shooting Mayella there. Then Boo Radley’s the only mockingbird who is saved by not turning himself in at the end when he kills Bob Ewell.”

I feel sometimes people forget what times were like, and it’s good to show people because you have to learn from your history so you don’t repeat it.”

Members of the cast had high hopes that the show would come off as emotionally driven and hit home on the racial inequality present in the United States.

“People come in, and they don’t really follow the Black Lives Matter movement or don’t really know what’s going on, and I think that they will leave with a better understanding- or, at least, I hope they do,” Shaw said.

The cast spoke about how they hope that the play tugs on people’s heartstrings as well.

“I hope it [the show] moves the audience. I hope it makes them cry,” Boulund said. “I hope they learn to not judge people as much- I hope I learn that too. I hope they can see people for what they are, instead of what they perceive them to be.”