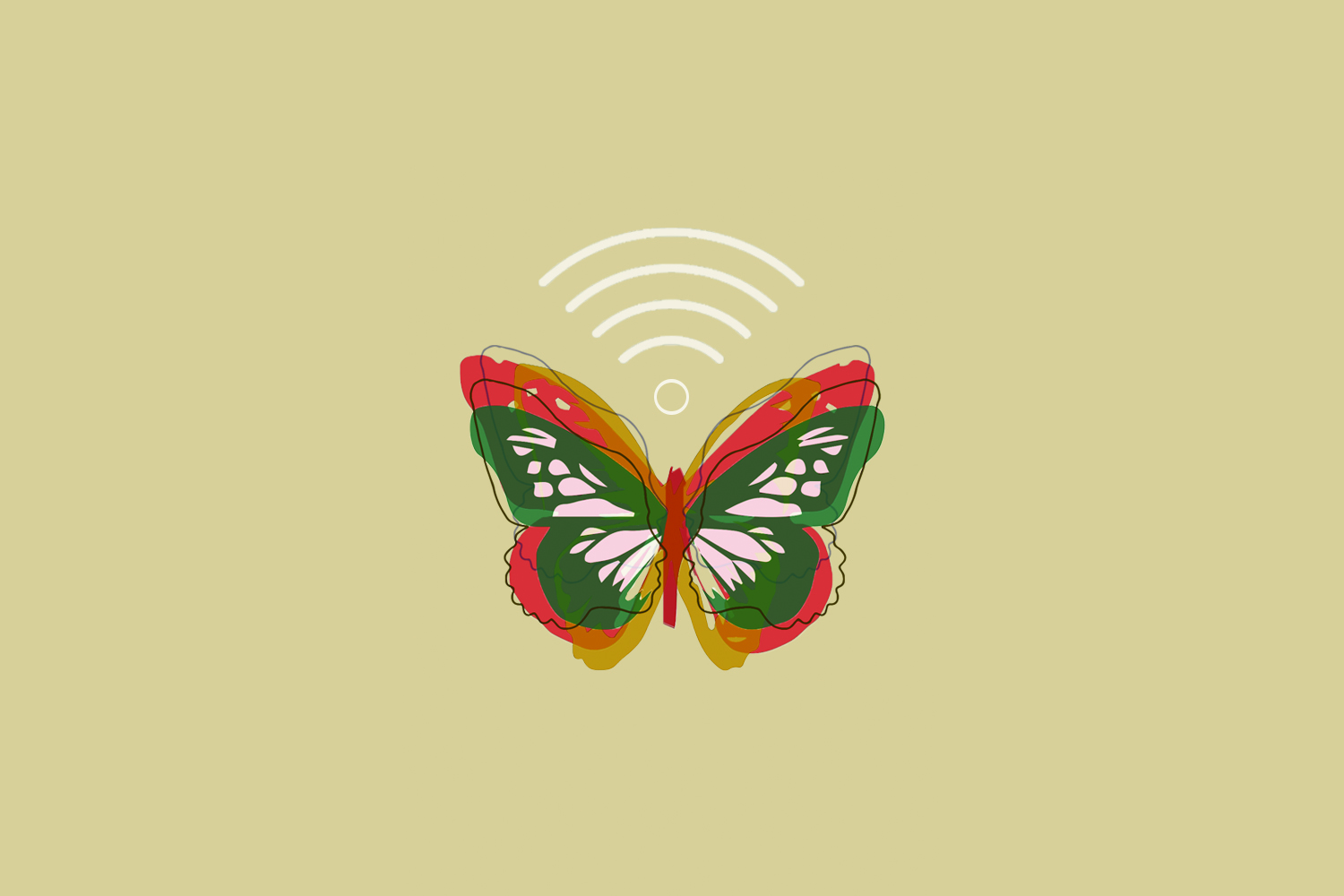 Students explore the benefits and disadvantages of social media in a technology-driven world.

Former Little Hawk Sy Butler ‘16, now at the University of Iowa, downloaded Snapchat and Facebook years ago but no longer routinely checks his accounts. He does, however, see some advantages to social media, specifically the prospect of keeping in contact with high school friends that have moved across the country.

“You can connect with people you wouldn’t normally be able to connect with,” Butler said. “You can also explore your own identity. [Social media] is a safe place to experiment with who you are and who you want to be without being judged by your friends and people you have to meet in person.”

In January of 2016, 2.3 billion people were classified as active social media users, according to global agency We Are Social. That statistic reflects approximately 31.5% of the world’s population. While the numbers continue to grow — there are 176 million more social media users than last year — some teenagers are less optimistic about social media due to complications often associated with excessive phone usage.

Butler suggests that young people waste a lot of time online, which can hinder their development of successful time management skills.

No offense to all of my friends and acquaintances, but I don’t really care what they are doing on a day-to-day basis.”

“It takes time to use social media, and it’s time spent that you could be spending on other things,” Butler said. “No offense to all of my friends and acquaintances, but I don’t really care what they are doing on a day-to-day basis.”

Butler also recognizes long-term complications for those who prioritize technology over personal relationships.

According to the Pew Research Center, 12% of teenagers do not have cell phones. Donald Hill ‘17 falls into that 12%. Hill maintains only one social media account: a Facebook profile which he operates solely for communication to compensate for his lack of a cell phone.

“I do not have a phone so [social media] is not really a practical thing to have,” Hill said. “Also, why bother? I’m distractible. Squirrels distract me. I don’t need a phone for that.”

Hill believes Generation Z — a demographic that includes students in middle school and high school — are too attached to their phones.

“I see a lot of phones at times when maybe phones shouldn’t be out,” Hill said. “It’s kind of annoying when I am trying to talk to someone and there is a phone between [my] face and [their] face.”

Schools across the nation have been striving to incentivize students to keep cellphones out of the classroom. The solution? Meet Pocket Points, an app which rewards students with discounts from local restaurants when students power off their phones during school hours. The use of Snapchat, a popular photo-sharing app, was restricted from the Iowa City Community School District (ICCSD) wifi at the beginning of the 2016-2017 school year. These steps are to keep students focused on academics while in school.

Recent City High graduate Phinny Brady ‘17 does have a cell phone but has no desire to use any form of social media, as he considers it to be the weakest form of expression and communication.

“[Social media] can only deliver the most surfaced aesthetic of what people want to be expressed as,” Brady said. “There is no depth to the actual communication.”

[Social media] can only deliver the most surfaced aesthetic of what people want to be expressed as.”

He also believes excessive social media usage can lead to anxiety and insecurity, and that users lose a sense of individuality and negatively conform to social media trends. According to Dr. Jim Taylor, a psychology professor at the University of San Francisco, social media has lead society to care more about how they are perceived by others, and less how they express their individuality and self-identities. He also states online users download social media for self-promotion to gain more self-esteem.

“It is our nature to compare ourselves to others, especially in high school when we are becoming who we are going to be for the rest of our lives,” Brady said. “Everybody wants to look a certain way; everybody want to be seen as something and usually it is something they are not. I think [social media] is mainly negative and conforming — it sorts everybody into this idea of what people should be.”

According to a 2012 study completed by the National Institutes of Health, “Internet Addiction Disorder (IAD) ruins lives by causing neurological complications, psychological disturbances, and social problems.” Their theory is that “digital technology users experience multiple layers of reward when they use various computer applications.” One “reward,” predominantly, being a sense of belonging. “The reward experienced is intensified when combined with mood enhancing/stimulating content.”

There are even military-style “boot camps” that support teenagers who are dependent on the internet for pleasure. Many times these teenagers face depression or anxiety as a complication of their addiction.

Some are finding it better to quit social media cold turkey than risk addiction to the sites. City High student Borey Chea ‘17 has an Instagram account, but she has been on a self-labeled “hiatus” from the app for 15 weeks.

“I found that [social media] is not a healthy space for my mindset and I really needed some time off,” Chea said. “For awhile I felt very disconnected with the real world — I did not feel like myself. I did not want to obsess over people and pictures, and the pictures themselves are very contrived. Social media is toxic for the mind.”

Chea believes content posted online is contrived and often does not accurately represent the person posting. She suspects online personas are frequently different from how a person behaves during real face-to-face conversation.

“You ultimately have the ability to project whoever you want yourself to be over social media,” Chea said. “Some girls are really nice on social media, but then you talk to them in person and they are not that way.”

You ultimately have the ability to project whoever you want yourself to be over social media.”

Sharing Chea’s outlook, Butler believes that only specific edited parcels of someone’s life will make the cut to be uploaded online. The number of likes and followers can often be linked to personal validation, self-esteem, and how ‘popular’ someone may be considered online, he said.

“You hear stories about how people on Facebook make their lives out to be much better than they really are, which leads to you feeling like you’re worth less because you see everyone else doing these cool things,” Butler said. “You only put the highlights of your life up on social media. And even then you can exaggerate beyond the good moments so it becomes a false representation of your life. You don’t really communicate with people via social media, you communicate with their personality online which is not really them.”

According to Dr. R. Kay Green, the CEO and President of RKG Marketing Solutions, perception is everything, especially in the realm of social media. Everyone has an ideal self they wish to project on social media platforms to maximize our success.

Along with the trend of false presences online, Butler is concerned that many teenagers and young adults cannot maintain lasting conversations with each other or adults because of their constant need to check phone notifications. One example he points to is phone usage during dinner or when any conversation turns “awkward.”

“Anytime there is an awkward situation, BOOM! phones out,” Butler said. “The minute that people don’t perform to their expectations in a social situation, they turn away on their phone, which completely segments them off. They can’t overcome one five-second awkward period to get the next good bit of conversation in because they are on their phones.”

The minute that people don’t perform to their expectations in a social situation, they turn away on their phone, which completely segments them off.”

Chea believes that due to electronic overuse, teenagers are becoming increasingly inept at holding face-to-face conversations adults. She points out this may be due to a generational gap in communication experiences and expectations — that those born into the era of social media rely more on technology for communication, and that older adults are more inclined to communicate face-to-face.

“Younger kids shy away [from conversation] and cannot handle silence,” Chea said. “Adults can express themselves more fluently — that is refreshing to see. I aspire to be like those adults. When you connect with someone in real life, it is the best feeling.”

Brady, in turn, notes that many adults do not “talk to just hear themselves talking.”

“Adults didn’t grow up with social media, so when they communicate, they want honest communication,” Brady said.

Brady likes the idea of technology, but he believes face-to-face conversation is, becoming less and less normal, which leads to confusion in communication.

“If you wanted something done, we used to have honest communication with others, but we aren’t forced to do so anymore,” Brady said.

Chea believes that while young people are too dependent on their cell phones, excessive usage is normal because Generation Z was raised with advanced technology at their fingertips.

“I think it is really hard for us to be not on our phone all the time because we grew up that way,” Chea said. “We use phones for pleasure, and by default, we overuse them.”

We use phones for pleasure, and by default, we overuse them.”

Oversharing is another problem Chea dislikes about social media. One trend on Instagram has been the creation of side accounts, or “Finstagrams,” which act as secondary, or fake, Instagram accounts used to post more intimate images and videos. She believes society pressures teenagers and young adults to crave constant attention, and a Finstagram is yet another method to acquire more followers and likes.

“I feel like people overshare a lot of their life, especially if they have a spam account on their Instagram,” Chea said. “Social Media makes you feel like you are the center of the universe. That is not a good mindset to have because you have to respect other people.”

Despite the love-hate relationship with social media, there are inherent advantages to having a social media account. Hill believes communication is made easier, and various platforms allow them to express their artistic sensibilities.

“Communication and form of expression are things that are definitely nice to have,” Hill said. “[Social media] is a successful form of communication that doesn’t rely on you being naturally talented at art or something.”

[Social media] is a successful form of communication that doesn’t rely on you being naturally talented at art or something.”

Brady says social media at its best can allow an increase in communication with people and places that are normally unreachable because of distance, such as popular musicians or artists.

“You can communicate with almost anyone, which I think is super cool,” Brady said. “There are so many opportunities involved in that.”

Although Chea does not plan on downloading Instagram back anytime soon, she does see some benefits to using social media.

“I think social media can be a great thing because you have information at the tip of your finger,” Chea said. “You can talk to people about anything and share your ideas. You can get a lot of perspectives from around the world. The worst parts of social media are when you abuse it and overuse it.”