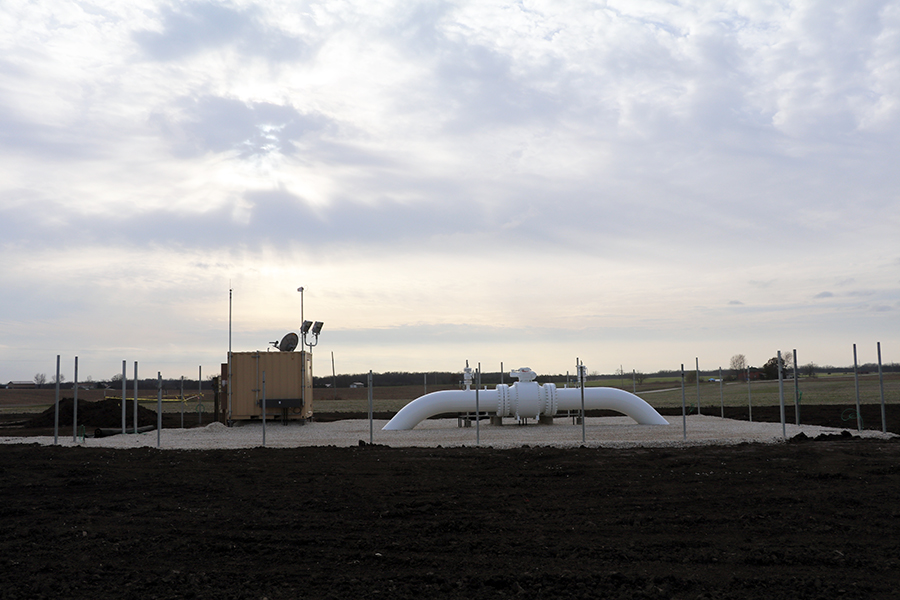 A look into the role that the construction of the Dakota Access Pipeline plays in our school, community, and state.

Alyssa Cooper ‘17 felt the passion from the protesters at Standing Rock personally. Cooper, whose heritage is rooted in the Ojibwe and Lakota tribes based in Northern Minnesota, has paid close attention to the controversy surrounding the initial route of the Dakota Access Pipeline through sacred Sioux land.

“The pipeline touches us more than other people because we understand and we do know people that live in the reservation up there,” she said. “We are [more attentive to stories involving Native Americans] because we don’t hear them that often, and when we do it catches our attention.”

Cooper and her family partake in ancient Native American traditions subtly, by smudging, a ritual involving the burning of sage to get rid of evil spirits, and also use some phrases used by their relatives, like ‘Mii gwetch’ which replaces ‘Thank you’. She acknowledges that there have been both difficulties and benefits from growing up with Native American heritage.

[Rerouting the pipeline] is a bit like rescinding an insult; it’s not so much the physical putting of a pipeline through the black hills [that matters], it’s the audacity to take the oil through the most sacred part of our culture.”

“There are a lot of stereotypes like alcoholism, gambling and getting government funding,” she said. “But it is a plus because it’s kind of cool to being a minority and it also looks good when you’re applying for colleges.”

According to the United States Census, American Indians and Alaska Natives made up only two percent of the population, including a combination of one or more races. With such small numbers, Native American struggles are rarely at the forefront of news.

“It’s hard for our voices to get out because we’re so small [compared to other minorities],” Cooper said. “But this pipeline isn’t just about the Native Americans. It’s about eighteen million other people.”

A recent decision to reroute the Dakota Access pipeline, however, has changed the narrative of the debate. On Sunday, December 3rd, the Department of the Army sided with protesters in its decision to halt construction of the pipeline near the grounds of the Standing Rock Sioux Reservation. Cooper describes the decision as a relief: it renewed her hope in the art of protest, and was a moment of pride in her native heritage.

“I felt like a big weight was lifted from my shoulders. Like this is the reason why we have the right to protest: to make change happen,” she said. “I was just so relieved and proud of my fellow natives for working so hard to get what they deserve.”

However, the fallout of this refinement is not yet set in stone: President-elect Donald Trump vows to continue construction once inaugurated. Trump, who is in support of the pipeline’s route close to sacred land, sides with Energy Transfer Partners, the company in charge of the pipeline’s construction. Cooper, whilst relieved short-term about the Army’s decision, is still holding her breath for fear of what the president-elect could do to when in power.

“I also don’t want to get my hopes up because Trump could change it back when he becomes president,” she said.

However, for Demetrious Ramirez ‘20, of the Lakota Sioux tribe, it’s all the same. Whether the pipeline is halted long-term or not, the intent behind its construction is clear.

“It’s a bit like rescinding an insult; it’s not so much the physical putting of a pipeline through the black hills, it’s the audacity to take the oil through the most sacred part of our culture,” he said.

For Ramirez, the threat of a pipeline has dire consequences. He affirms that it could destroy the very basis of the Sioux tribe: the sacred land on which their traditions are practiced.

“The black hills, which is the land that the pipeline is proposed to go through, are the center point of Sioux culture,” Ramirez said. “They are the sacred land from which our forefathers came from and without [the black hills], there is no culture for the Sioux.”

But Ramirez asserts that this isn’t the only incident of a threat to the Sioux; rather, it is part of a larger issue of a disregard for Sioux culture.

“I view the pipeline as much akin to much of the other things that have been done to the black hills; it’s something that has never stopped happening,” he said.

Cooper agrees that the attention that the Standing Rock protests have garnered is not only because of the pipeline, but because of previous offenses that have led to its construction.

“It just shows that we’re not treated well,” she said.

As Kristen Rankin, a junior at the University of Iowa, was taken into custody for protesting the construction of the Dakota Access Pipeline, or DAPL, she sang. She, along with her friend Maggie Dressel and two of Dressel’s family members, made the trip to Boone County, Iowa, in mid September after signing a pledge of resistance earlier that summer. She got an email, drove to Boone County and stood with 150-200 others at a construction site of the pipeline.

“[We] found out about the Bakken Pipeline and what was going on with that and did a little bit of research and we decided that it was wrong on so many levels because it’s stepping on indigenous people’s rights,” Rankin said. “We had to sign saying that we knew there was a risk that we could get arrested, but that we were going to take a stand and that we wanted to know about upcoming protests that would happen. There was a Facebook event that we said we were going to go to, and the police found out about it because of the Facebook event so they were waiting for us there at the protest.”

Rankin was the seventh of nineteen protesters arrested that day. She hadn’t been there for five minutes when a police officer approached her, asking if she was aware that she was on private property and private land.

“I said ‘yes,’ and he asked if I had any intention of staying there, and I said ‘yes.’ So, he said ‘Well, okay, I’m placing you under arrest,’ and I was like ‘okay.’ And then he arrested me.” Rankin said.

We were extremely lucky. I know police brutality can be a very complex topic, and we were very privileged not to experience it.”

This experience with the Boone County police was very different from that of the water protectors at the Standing Rock Reservation in North Dakota. The officer who arrested Rankin walked her over to another officer, who asked her how her day was and escorted her to the bus that held the other protesters — and on the bus, they sang to the other protesters and took selfies with each other.

“We were extremely lucky. I know police brutality can be a very complex topic, and we were very privileged not to experience it,” said Rankin. “The Boone County police officers were incredibly polite, and I realize that’s not what is going on in North Dakota right now, or what had been going on for awhile, when they were using the water cannons and the rubber bullets.”

An hour and a half drive South East of Iowa City presents vast fields, the occasional rural gas station, and an enormous, brightly lit cross with floodlights accentuating a bold statement: “Protect Our Heritage.” Just before the river city of Keokuk, Iowa, a gravel side road leads to a productive construction site. Men in machinery are working to cover up the recently built Dakota Access Pipeline with loose dirt and are reseeding the area. The construction crew has been in Iowa since May, working on the pipeline that had grown infamous to many in the region.

“The surrounding neighbors have been very nice to us,” the overseer of the site, who did not want his name disclosed, said. “There haven’t been any protests here.”

Another 30 minute drive alongside the Mississippi River leads to a second construction site with a makeshift dirt road that disappears around a curve on a forested bluff. At the entrance of this road, four cars are parked, each with a man inside, staying insulated from the wind blowing off of the river. Each one adorned a fluorescent green vest, labeled “Per-Mar Security.” They refused to comment on the protests or development of the pipeline.

The 1,172 mile pipeline expands diagonally across Iowa, and will eventually be the carrier of sweet crude oil from North Dakota to Patoka, Illinois, where oil production areas and existing pipelines are located.

According to Energy Transfer Partners, the company overseeing the Dakota Access Pipeline, the project has created 4,000 jobs. Although the jobs and work is temporary, labor is needed in large amounts to construct the approximately 343 mile route through Iowa.

For many Iowans, the employment opportunities are not worth the destruction of land and resources. Protests have occurred in many areas in the state, including Sandusky County, where Keokuk is located. Tyler Priest, Associate Professor of History and Geography at the University of Iowa, concludes that this pipeline is actually the safest option for the transferral of oil. According to Priest, large oil spills of 500 barrels or more have gone down, and when they do leak, it is because the pipelines are usually old and eroded.

If we don’t have pipelines, we’ll find another route to get the oil, by train or we’ll just import it from other countries.”

— Tyler Priest, Associate Professor of History and Geography at the University of Iowa

“Pipelines leak and there’s much greater attention to it,” Priest said. “This particular pipeline is double walled, deep beneath the Missouri River in this particular location. But, still people are concerned.”

In 2013, a train carrying oil through Quebec derailed, causing an explosion killing 47 people, carrying a the same Bakken Formation oil that would be transported through the Dakota Access Pipeline. Priest explains that this form of light oil is similar to gasoline, which makes it more valuable, but also more volatile. The best transportation method for oil has been contested, however, oil production and consumption will not stop in the meantime.

“Stopping pipelines will not have an effect on the oil that we consume.,” Priest said. “If we don’t have pipelines, we’ll find another route to get the oil, by train or we’ll just import it from other countries.”