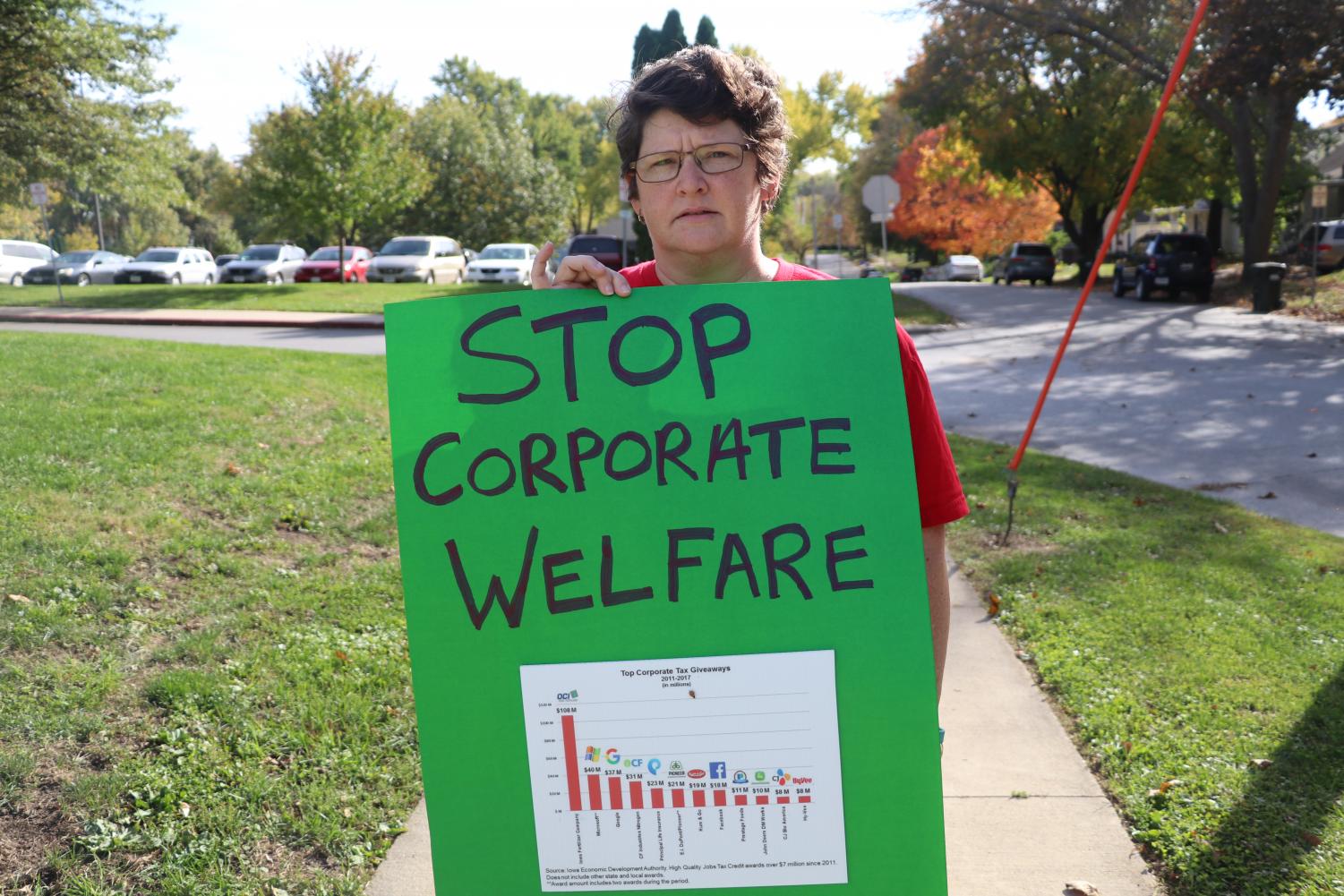 Protester Temple Hiatt stands next to the Statue of Liberty replica outside City High. (Olivia Lusala)

Protester Temple Hiatt stands next to the Statue of Liberty replica outside City High.

Currently, only 58% of Iowans have post-secondary education, and research by the Georgetown University Center on Education and the Workforce estimates that 68% of jobs in Iowa will require post-secondary education. Governor Kim Reynolds and the Future Ready Iowa (FRI) Alliance, a group created to devise how to best surpass the 68%, have devised a plan to reach 70% by 2025 through five recommendations.

“No students today can afford to just have a high school diploma,” said Linda Fandel, Special Assistant for Education. “[FRI] is the #1 goal and priority of the Governor Reynolds administration.”

Some of these recommendations include increasing accessibility to vocational education, making schools equitable across Iowa, and a Last-Dollar Scholarship and Grant Program that would be available to people wanting to enroll in post-secondary education and seeking high-demand jobs, whether an occupational therapist or a wind turbine technician.

“A lot of high-demand jobs right now are jobs employers are having a tough time filling.” said Fandel. “I think it’ll be very effective because it creates more opportunities for more Iowans to have great careers and for employers to be able to hire the skilled workforce they need.”

On October 20th, Governor Reynolds visited the commons of City High for a public discussion about FRI’s recommendations, with a focus on vocational education and improving education for people with disabilities.

The discussion was moderated by David Mitchell, Administrator for Vocational Rehabilitation at the Iowa Department of Education. Three City High alumni who experienced the benefits of vocational education talked about how the training impacted them. One of those alumni, Daniel Meyer, was able to job shadow through a program called Making the Grade.

“It helped me find the job that I’m working at now at Proctor and Gamble.” Meyer said. “Without Making the Grade I wouldn’t have the job I have today because I wouldn’t know about staff management.”

However, not everybody was supportive of the governor’s visit. A group of protesters made up of members from the movement Iowans for Public Education and City High students held signs near the Statue of Liberty replica.

Karen Nichols, an active member of Iowans for Public Education and head of the protest, was not protesting the governor’s initiative to further vocational education but rather the voucher system—a system where subsidies are given out to parents to spend on school. The funds for voucher systems tend to come directly out of the education budget.

We are going to be the people directly affected by her budget cuts and it’s not ok that we’re not being included in the discussion.”

“[Governor Reynolds] would like to see us institute a voucher program that, though it may sound like a good idea on the surface, when you look at how it actually works out it ends up defunding public education.” said Nichols. “I think we have a great bunch of schools here in Iowa and I don’t think we want to continue down this road of defunding them and taking on sort of a privatization mission.”

“[The government] is underfunding K12 education, which is not what Iowa values represent,” Hiatt said. “I’m an ‘89 graduate of City High and we have always led the way in public education.”

One of the major reasons for some students’ choice to protest was that the discussion was not widely advertised throughout the school.

“She’s here giving a speech at our school and we’re not even allowed to hear it,” Ellen Fields ‘18 said. “We are going to be the people directly affected by her budget cuts and it’s not ok that we’re not being included in the discussion.”

Teagan Roeder ‘18 was also upset by this lack of outreach for and communication about the event.

“It angers me that she’s using our school as basically a publicity stunt to give a speech to students, supposedly, but not even having this speech announced to the student body in any way,” Roeder said. “Having it in a closed room just really angers me.”

Fandel helped coordinate the visit to City and said that since this event is on the governor’s schedule, anybody is welcome. Principal Bacon thought differently.

“The way I understood it is that they invited certain people,” said Principal Bacon. “It was not designed to be a big open forum on a range of topics. It’s designed to be a targeted panel discussion on a specific theme.”

Nevertheless, Principal Bacon believes this is a great experience for students.

My budget will reflect what my priorities are, that means helping Iowans get the skills they need to fill the jobs today so I can ultimately grow the economy.”

“I think anytime the governor, congressman or any high level office [visits], that’s a big deal.” said Principal Bacon. “Regardless of political opinion, regardless of whether we voted for that person or not or we all don’t agree with that person, I think it’s a great opportunity to have the governor of your state come to your high school and give students the opportunity to interact with somebody in that position and ask questions.”

Although there is no guarantee students will stay in Iowa after they have received post-secondary education to fill the need for the high-demand, Governor Reynolds believes there is a trend with students receiving some vocational education.

“What’s happening is the kids are building relationships and they’re building a network,” Governor Reynolds said. “We test them every year and a higher percentage of students are saying they’re more likely to stay in Iowa.”

Besides Iowa City, the governor has been traveling to Marshalltown, Des Moines, and Cedar Rapids to get feedback on FRI.

“We’re fleshing a lot of this out.” Governor Reynolds said. “It’s not written in stone and that’s why we’re doing a listening tour. We’re getting a lot of positive feedback.”

Governor Reynolds plans to move the Last Dollar Scholarship and Grant Program to legislation to get funding.

“My budget will reflect what my priorities are,” Governor Reynolds said. “That means helping Iowans get the skills they need to fill the jobs today so I can ultimately grow the economy.”