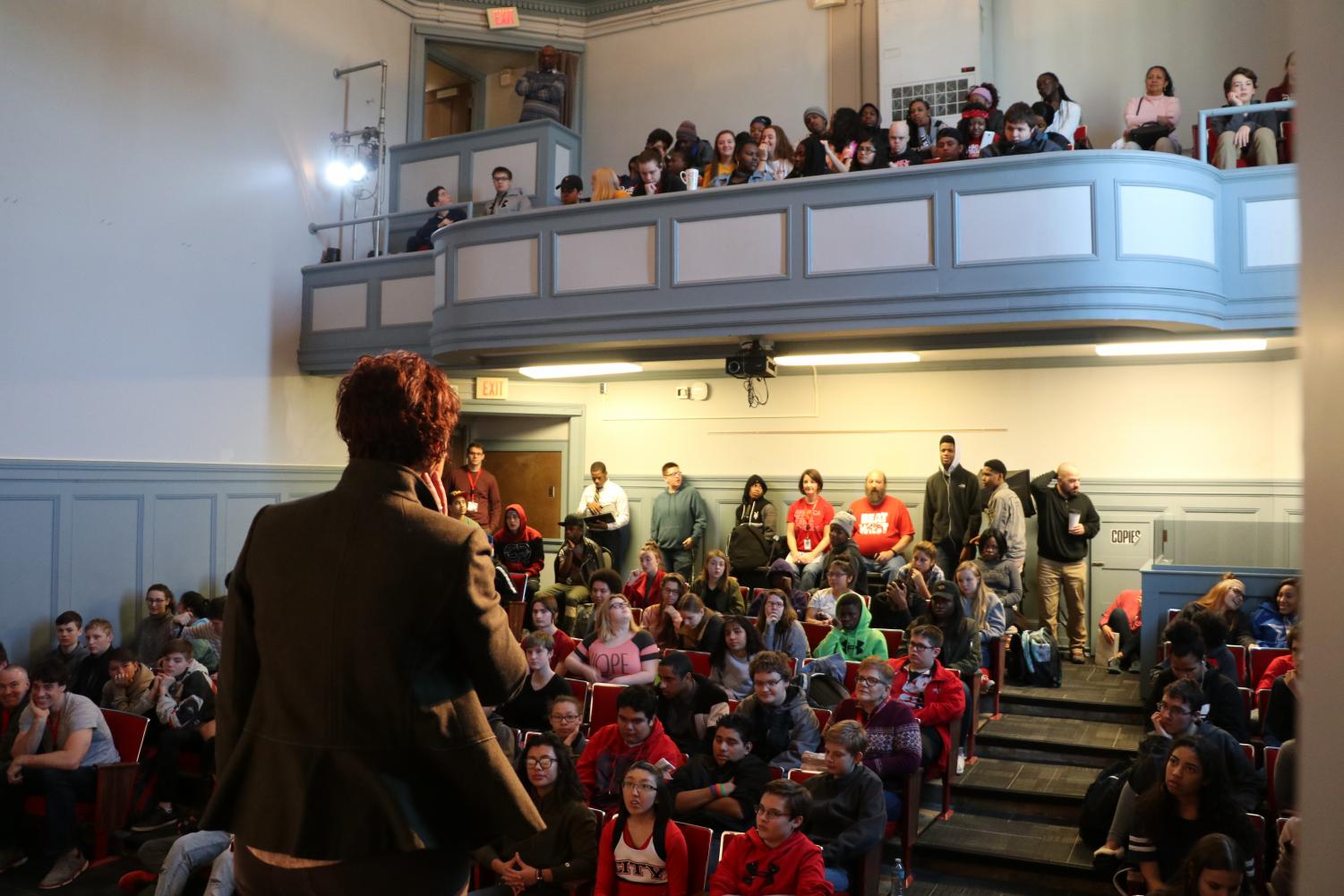 Gathered in the Little Theater and Opstad Auditorium, students listened to speakers talk about their lives and how they related to Martin Luther King Jr., as Iowa City High prepares to celebrate MLK day on Monday, January 15th. Speakers joined together to give input on poetry and storytelling. Topics ranged from being an adult to parenting, all relating to the problems we face in modern society.

Akwi Nji, a writer, artist, producer, and poet located in Cedar Rapids, spoke during 1st period in storytelling fashion about her struggles of being a person of color surrounded by white people as a child.

“Everybody is creative and I think that there is a lot of power to be explored in the context of art,” Nji said. “I think it’s important that we share the personal stories that are within us and shape who we are. I think the only way to build a stronger more positive community is if we do more of that.”

Nji invited students to come up to the stage to say what they stand for to promote sharing their stories. Responses ranged from family to fashion, displaying the diversity held within the walls of City.

Destinie Gibson ‘20 shared her poem about stereotypes, white supremacy, and the struggle against police brutality.

“I was inspired to go up there because she inspired me. She is a woman of color, and women of color inspire me,” Gibson said.

During 2nd period, Raquisha Harrington expanded on the idea of finding your own path and not giving up on yourself. Harrington, at the age of 15, was a teen parent but persisted through the stereotypes of young mothers and people of color. She repeated the phrase “I want to be the author of my own story” to show her desire to step away from what was bringing her down, and not fitting the failing figure of young parents all while showing pictures of her happy family.

“When you are faced with challenges, or when people tell you that you can’t accomplish things, or you want to reach certain goals and you’re faced with a lot of challenges, you should never give up.” Harrington said. “Continue to be the first version of yourself and not the second version of somebody else.”

Harrington is also part of an MLK Day celebration on Saturday, January 13th from noon to 6:00 pm at the Robert A. Lee Recreation center for students in grades 5-12. Students will listen to speakers, participate in group activities, and bond over food.

In Opstad, hundreds of students filed in to listen to City’s Student Advisory Director, Fred Newell. Growing up without a supportive father in his life, he shared his goals on making City more of a community and creating safe places to turn to in the community. Focusing on how “failure is not final unless you quit,” he shared outlets in Iowa City for people in need of support.

“There were many times [Martin Luther King Jr.] ran into obstacles but, the reason why he became such a big influence in our community is because he didn’t allow those failures to stop him. He used it as fuel to help us to get to where we are now,” Newell said.

Henri Harper is an Iowa City police community outreach officer who used to be an educator at City High school. Harper is one of the founders of a program called Fas Trac. Fas Trac aims to help student to focus and exceed on their education. He is also one of the speaker for the event that City High is holding for Martin Luther King Day.

“Always stay focused regarding what age you are or what you are doing in your life. You have to be focused! You have to create your own dreams and goals and you have to understand how and why [MLK day] should mean something to you, for especially the young black youngster,” Harper said.

Harper believes that in order for people, especially students, to benefit from Martin Luther King Day, they need to do their research and understand who Martin Luther really was and the movement that he was apart of.

As being apart of the speakers that City High is having for MLK Day, Harper believes that it would more effective if students again did their research, brought questions with them to the speakers, and educate themselves further about Martin Luther King.

“I think having speakers is good, but at the same time a lot of kids are probably going just to get out of class and  because it is something to do. But they really don’t understand the magnitude of what this day really means and Martin Luther King really was about,” Harper said. ”That saddens me, especially with African American [students] and people in general to understand what the civil rights were really about, what were the people involved in the movement beside Martin Luther King.”

Harper has educated himself about Martin Luther King and the movement that he stood for by going to civil rights trips and doing research.

“I started educating myself on the civil right movement, not just Martin Luther King and I got to understand better about what It was really about because it was really not just about Martin Luther King. He was the face, he was the person who lead the movement, but at the same time there is a lot more pieces and more parts that he was involved in.”

Becoming educated on the Civil Rights movement and other people that were involved in it is what prompt Henri Harper to have the Civil Rights trip during the summer for the members of Fas Trac.

“That is why we go on these Civil Rights trips every year because there is so much information to learn in going down south. You can’t just get form going once or twice because there is just so much to learn and so much to know. If it don’t change you as a person, then you are missing the boat,” Harper said.