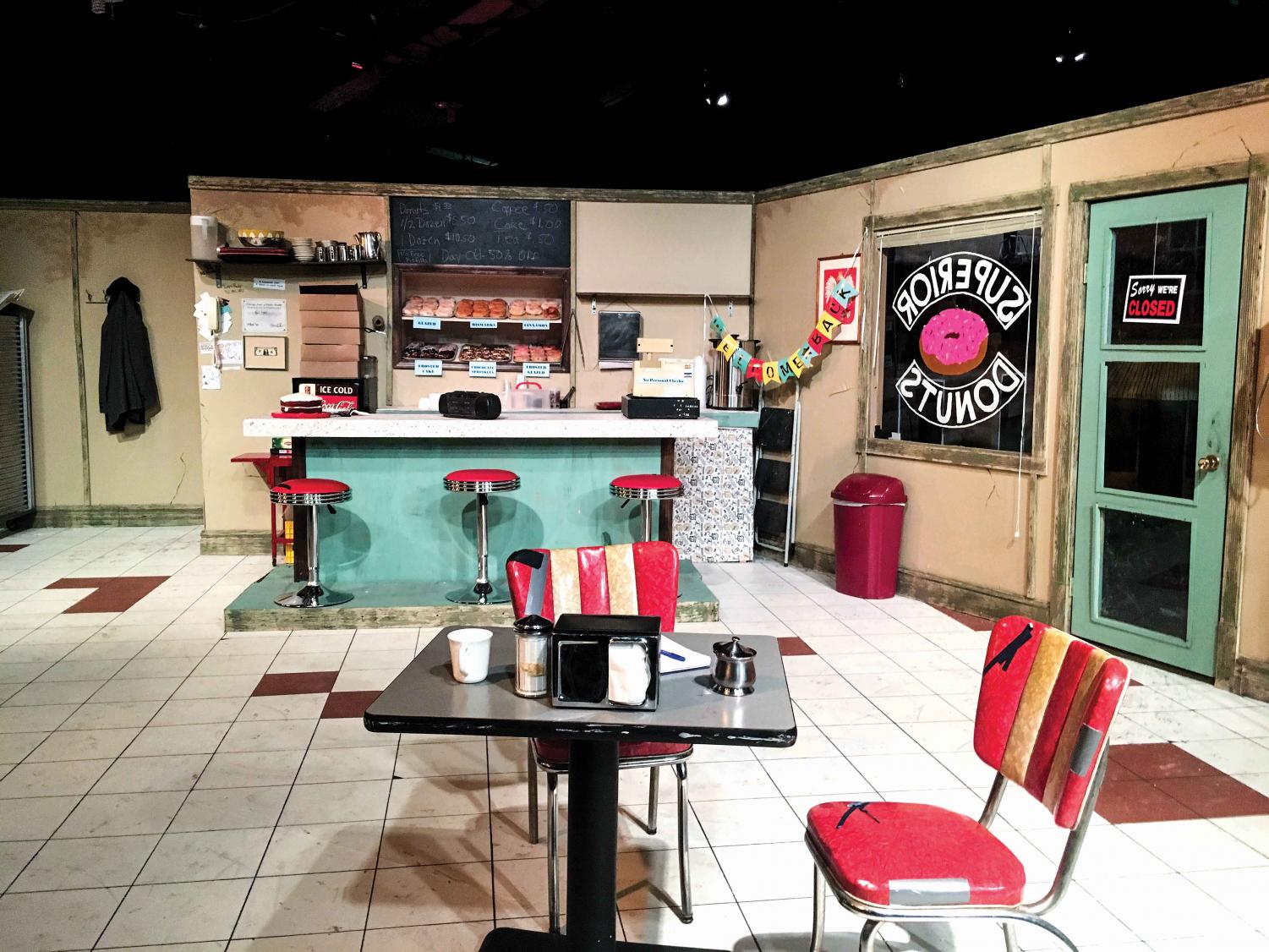 The set of “Superior Donuts.”

Two toppled tables, a broken door window, and obscenity plastered in red on the wall set the stage as the lights come up.  A moment of silence as the audience takes in the pitifully vandalized donut shop.  “A real ****ing shame,” a brawny Russian man tells the two cops surveying the disarray.  And so begins Superior Donuts.

Iowa City Community Theater’s most recent production performed the weekends of January 19th and 26th at the Johnson County Fairgrounds.  A comedy with serious undertones, Superior Donuts is a play that orbits around 59-year-old Arthur Przybyszewski (p. Sheb-ur-shef-ski), the passive owner of a tumble-down donut shop in Uptown Chicago, and his relationship with his young African-American assistant Franco Wicks – who, despite his troubled history, dreams of revitalizing the donut shop and one day publishing what he claims to be “the great American novel.”  Arthur and Franco forge a friendship that ultimately changes the course of their lives.

Amadou Sanogo ‘18, a City High actor, starred as the energetic Franco.  Sanogo’s natural comedic demeanor was fitting to navigate the witticisms and woes of the character.  As Arthur P. observes, “You’re an optimist, Franco.” To which Franco replies, “I wouldn’t say that. I’m intrepid.”  The majority of laughs from the show were generated by Sanogo’s sassy performance, and the majority of tears from his unfortunate consequences.

Superior Donuts was relevant and engaging because of the frequent discussions of immigration and racism.  Arthur, whose parents were Polish immigrants, was a draft evader as a young man and reflects on the rift that caused between him and his parents and his experience with society.  He also faces frequent bombardment from his Russian neighbor Max, who is insistent on buying the store – he claims he is “guilty only of living the American Dream… I came to this country to __, not to fade away.”

The topic of racism was brought up bluntly, honestly, and not without making the audience laugh at the same time.  Max is guilty of claiming black delinquents in the neighborhood are threatening the store’s security, while in contrast, Franco goes out of his way to bring up racism in conversation with Arthur.  After a brief, heated discussion on whether or not Arthur is racist, Franco challenges him to a racist test: he must name nine black poets besides Langston Hughes.  Spoiler alert: Arthur does.

Superior Donuts granted a refuge from the current political climate while appreciating how far we have come.  Set in 2010, it offered a reflective view on what has and hasn’t changed in the urban biome of our diverse nation, forged prominently of hard-working minorities and immigrants.  Superior Donuts was funny, unpredictable, humble, and charmingly human – and hey – “it ain’t horsefat.”