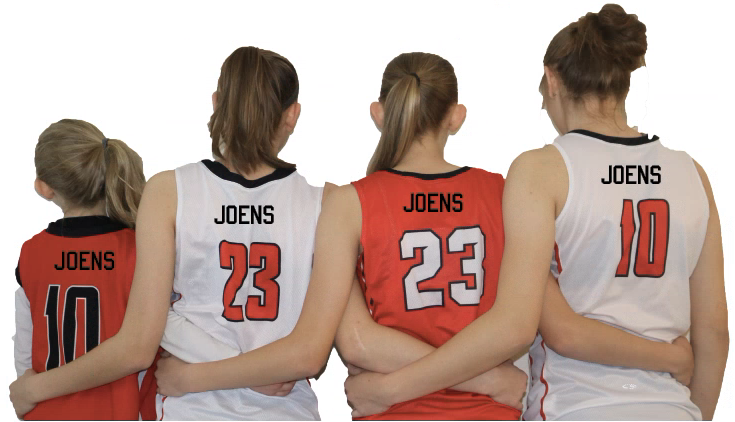 Playing With the Name

The Joens name has long been in the basketball spotlight, but how do the girls with the name feel about being responsible for it?

The Joens name has been in the headlines for over six years, and is sure to be for at least 13 years to come—Bailey, the youngest, is five. When asked what they assume people think of upon hearing the name “Joens,” Ashley, Aubrey, Kelsey, and Bailey respond with, “Basketball players, probably.”

And they’re okay with that.

After all, they will each admit that “[Basketball is] our life. It’s either we’re in the gym or we’re at work.”

Their parents, Brian and Lisa, met at Kirkwood Community College when both of them were basketball players there. Since their five children were little, it seems it has been their destiny to adopt the same passion as their parents.

“When we were babies Mom and Dad would roll a ball back and forth to us,” Ashley said.

Ever since Courtney Joens ‘16 arrived at the doorsteps of City High in 2012, the name Joens has had a perpetual place in the mouths of fans across the state. Courtney, who’s now playing D1 ball at Illinois, has since passed on the responsibility of representing her family to her younger sisters Ashley ‘18 and Aubrey ‘20.

Aubrey has at times felt the darkness of her sisters’ shadows.

“I’m honored [to wear the name ‘Joens’ on the back of my jersey], but I feel pressure to live up to my sisters.”

Aubrey also experiences people expecting her to be a certain way because of her last name “all the time.”

“People say I don’t need to go to class because I’m a Joens, they think teachers will just give me an A,” Aubrey said. “They always say, ‘Oh, you’re a Joens you can get away with a lot.’”

Ashley sees being a Joens girl as an opportunity for a source of motivation.

“[I see it] as a challenge and something to motivate you to be better than what they were, to try and outdo them,” she said.

It seems the younger sisters have held up their end of the bargain, however, leading their City High team through 21 games of mostly uncontested wins. Ashley and Aubrey both plan to continue their win-streak all the way through the state championship game on March 3rd.

Heightened levels of composure and focus are two things Ashley attributes to her team’s ability to beat team after team without being phased. Ashley says her team has taken their season one game at a time, and never takes a team for granted. Although she hasn’t had to deal with a loss in over 12 weeks, Ashley says she usually takes losses the hardest out of all of her teammates.

“I don’t get nervous before the games but if we were to lose I’d think about it for awhile. I don’t move on as fast as others might,” Ashley said. “I deal with it by going to the gym and working on it. Watching film and see what we need to do differently and then working on it.”

Aside from Joens, Ashley holds another name on the team. Because her role is to maintain her team’s focus, she is known as “Mom” to her teammates—er, children?

“She acts like a mom. She’s in charge of everything and keeps everybody in line,” Aubrey said. “She’s always focused and never really gets off-track. But at the same time she can have fun, but she knows when to do it.”

When Ashley graduates next year, Aubrey will be the Joens holding the fort at City High until Kelsey arrives in two years.

“I’ll definitely have to rebound more [next year], because she’s our main rebounder. Most of time now, even if I do get a rebound, she just rips it out of my hands,” Aubrey said. “I’ll have to be more of a leader on and off the court by keeping everybody focused, because that’s her role on the team.”

Perhaps one of the greatest reasons why the court is big enough for both Ashley and Aubrey is the fact that each use their time on the court differently.

“We are different players in a lot of ways. She’s way bigger than me and does different stuff than me so we have different roles,” Aubrey said. “I think Kelsey and Ashley are similar players. I don’t take charge as much as Ashley does. She’s more around the basket and she attacks and drives, whereas I’m more of a shooter.”

Kelsey’s arrival is sure to reinvigorate the Joens era of basketball at City High. Just a seventh grader, Kelsey recently broke Ashley’s previous single game scoring record of 43 by scoring 47 points in a game.

“[Like my sisters], I hope to make it to State [in high school], but I’m focusing on improving myself in the present. People knew my siblings and I’m okay with my coaches having higher expectations of me, because I can deal with it,” Kelsey said.

“SInce people knew my sisters, my coaches expect more from me. I’m okay with that because I can live up to them.””

Ashley has set several more records this season for Kelsey to chase, including becoming only the 19th player ever in the state to score over 2,000 points, breaking her single game record several times to end with 45 points (the most scored in Iowa this season), and capturing the single season scoring record with a current amount of 642.

Although her accomplishments are unprecedented, the only accomplishment Ashley is interested in right now is winning a state championship.

“It’s an honor but I don’t really pay as much attention to it since I only have the one goal right now which is the state championship,” she said. “[These records are] nice to have—like, when I look back on them in 20 years it’ll be cool—but right now I don’t really think much about that.”

Aubrey agrees with her older sister.

“I’m kind of the same way. It’d be cool to get the records but I just go out and keep playing,” she said. “If I get them then I get them.”

For Ashley Joens, three of the most important weeks of her young basketball career are ahead of her. She doesn’t so much as care about people remembering her name, as much her team’s performance at State.

“Everyone remembers who wins State. It means you’re the best,” Ashley said. “It’s a lot of work trying to be the best, you always have to come ready to play and you can’t take anything for granted because they could beat you.”