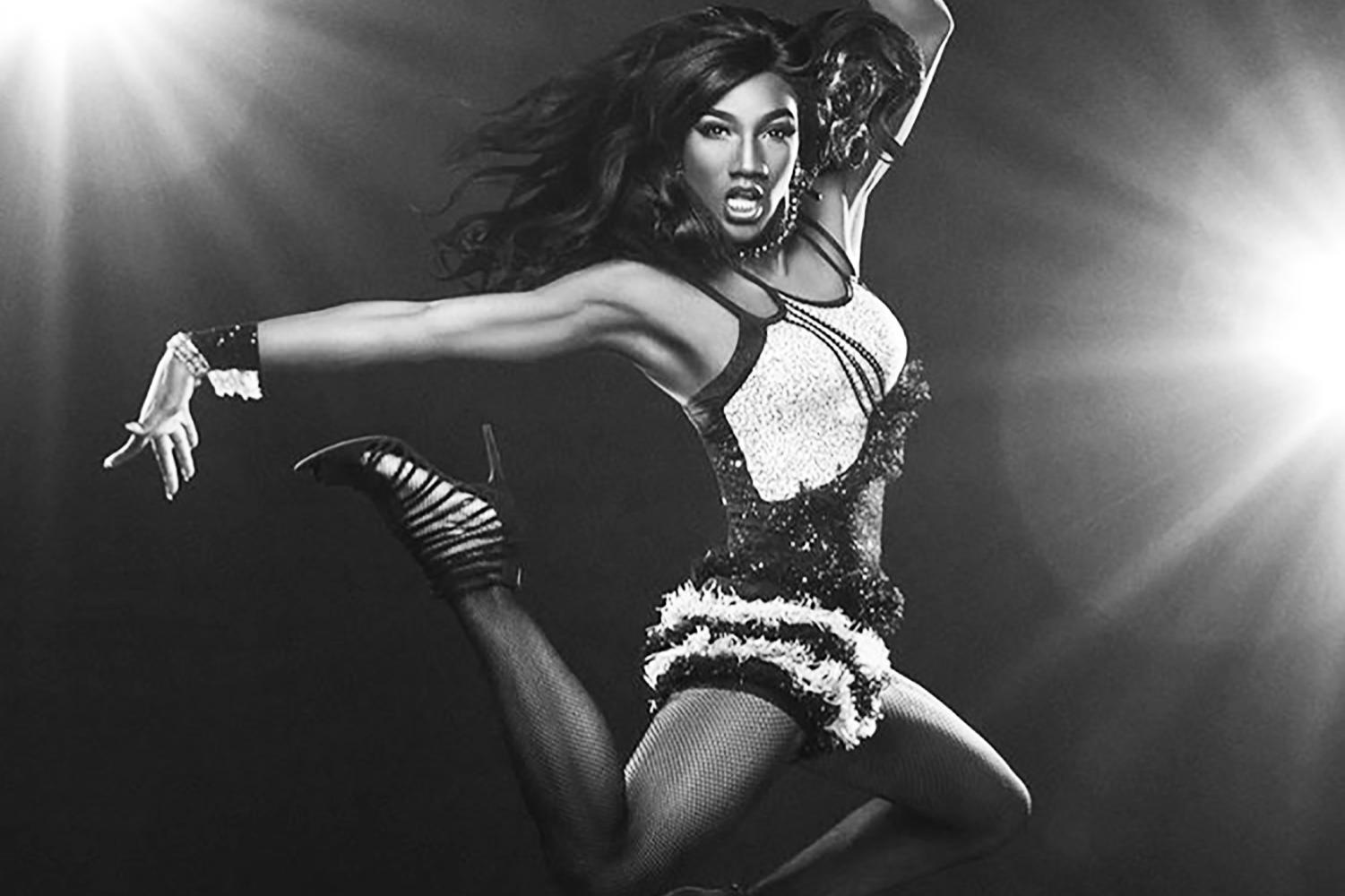 Ever since he was nine years old, Bubba Perez has been intrigued by drag culture. He has always loved performing and grew up watching “RuPaul’s Drag Race.” Over time, drag culture has flourished and through television and social media has gained popularity and support. City High’s annual Film Fest lets students dress up in a costume of their choice. This year, Perez decided to dress up as a drag queen.

“It’s a lot, it takes a couple hours to get into drag,” Perez said. “You have to put on makeup, put on a wig, and then you have to find clothes that fit your body because the shapes for men are different than for women.”

Perez first dressed up as a drag queen for a film he was in for last year’s Film Fest.

“I was in a film that was all men as women and we dressed up in drag. It was just a joke film but it was a lot of fun,” Perez said.

However, although fun, it’s also costly and time-consuming to do drag.

“It’s a lot of work and it costs a lot of money to do drag,” Perez said. “I don’t do it that often because I don’t have the makeup skills or anything like that but I really admire all of the work and how these artists create these completely different personalities.”

Two professionals who are experienced in creating different personalities are AJ Adorien and King Robinson.

AJ Adorien, whose drag persona is Hollywood Hope, first got into drag in high school.

“There was a little bar and grill in Cedar Rapids called Hamburger Mary’s and it was family friendly. My friends and I used to go out every weekend and watch their drag shows,” Adorien said. “One of my best friends at the time said that I should give it a try, and she invited me to have my first drag performance at her sweet sixteen. After that I did open stages at Mary’s, where I eventually became Miss Teen Hamburger Mary’s and from then on I was hooked and the rest was history.”

King Robinson is a dance instructor and bartender by day and The Queen Fantasia Wood, a drag queen, at night.

“I got into drag through ‘Drag U,’ a competition held at Studio 13 that gives any Average Joe the opportunity to be paired with a Queen and get the full drag experience,” Robinson said. “They dress you, do your makeup, hair, accessories, and everything else. All I had to do was invite people and perform for them. From there I fell in love and continued to do it until I became a booked performer at Studio 13 and other bars in the Midwest.”

One quality all three share is their love for performing.

Robinson, who has been doing drag for two years now, graduated from college with a theater degree.

“Drag just came as another outlet to use my voice and talents to express not only who I was but also the need for our country to change,” Robinson said. “My drag aesthetic tends to lean towards the political as much as she leans towards the sensual.”

Similarly, Perez has been involved in many musical and theatrical activities.

“I think I first dressed up when I was in second grade for a musical. I was dressed in a dress and that was when I first got introduced. I realized, ‘Wow, this is actually something that people do,’ and it was a lot of fun,” Perez said. “But I love performing and I’ve been doing choir and show choir and things like that my entire life.”

“In high school I was involved in a lot of after-school activities like show choir, band, football, and musicals, so performing was always in my blood. Drag for me is just another way to express myself in an artistic way,” Adorien said. “As far as dressing up, I never really experienced it until my first drag performance. I enjoy the transformation from a handsome male to a drop-dead gorgeous female.”

Even as an experienced drag performer, something Adorien still struggles with is walking in heels.

“I envy a person that can walk all day in heels,” Adorien said. “I wear a size 13 in women’s shoes and as soon as I put on heels on I instantly regret it.”

Adorien chose Hollywood Hope as his drag persona because of the name’s sentimental value.

“My first name Hollywood was given to me by a coworker in high school. Hollywood is the name of a character from the movie Mannequin,” Adorien said. “My last name Hope came from myself. In high school I dealt with a lot of depression and mental illness, although I was popular and actually the first openly gay male to become homecoming king in the state of Iowa. It was still really hard to accept myself for who I really was, so I picked Hope to be my last name to remind myself to stay hopeful for a brighter future.”

Although Perez currently does not have a drag persona, he hopes she will be a funny, sassy dancer.

“While I love who I am as King, Queen adds another dimension to my already outgoing personality. The Queen can be as sexy as she wants, as vocal as she wants, and as unapologetically fierce as she wants,” Robinson said. “I wish I could be more like her in that respect. Able to just call out wrongs and stomp my ground without the fear of consequences or opposition.”

Creating a drag persona was a long process, combining aspects of Robinson’s childhood, interests, and past negative experiences.

“My name The Queen Fantasia Wood came from a couple things; when I was young, people called me Queen as a slur because of my more feminine tendencies. I adopted the name The Queen as an effort to reclaim a term that gave me so much pain growing up. Why should it be negative to be a Queen? The name Fantasia came from my extreme interest in K-pop and Asian culture in general. As for Wood, I grew up on Wood Street in Chicago and it’s also sort of a double entendre,” Robinson said. “At the end of the day, I needed my name to be unique, reflect the past, look towards the future, and be something fun and extra. So there you have it, The Queen Fantasia Wood, but you can just call me Queen.”

For Robinson, the performing and dancing aspects of drag come naturally. The most difficult part of doing drag is the preparation and avoiding negative labels.

“All the behind the scenes work to get to that point is the real challenge. Being a great makeup artist, being fashionable, and being able to articulate yourself well in front of an audience are all equally weighted on the scales of drag,” Robinson said. “In drag terms you can be a fierce performer and still be known as a ‘busted’ queen, meaning your makeup is trash, a ‘crafty’ or ‘cheap’ queen, meaning you shop at Forever 21 for all your clothes or tend to look a little homemade. While most queens avoid looking like a kindergarten art project, escaping these labels is hard once they are attached to you.”

Another difficult part about drag is creating a unique look.

“A lot of it is just learning your face and what looks good on your face. Because when you first start out, you want to copy everything you see or copy makeup artists that you see on YouTube, but just because that works for them doesn’t mean that it will work for you,” Robinson said. “You really have to know who you are. It’s a process. It’s still a process. I still find little things every time I do my makeup where I think ‘I want to change that, I want to look a little different.’ For me, it’s easily the hardest part about drag.”

A big part of drag is having thick skin and being able to communicate with other queens.

“A big part of the culture is “throwing shade” not in a manner that is mean-spirited exactly and tears other queens down, but as playful banter meant to help them face a harsh world full of criticism, gender binaries, and stereotypes,” Robinson said. “If you can’t read your sisters, how in the world can you read somebody else?”

At the end of the day, I needed my name to be unique, reflect the past, look towards the future, and be something fun and extra. So there you have it, The Queen Fantasia Wood, but you can just call me Queen”

Drag requires a lot of time. For Robinson, it usually takes two and a half hours to fully get ready for a show. It’s not ideal, but over the years he has learned to do his makeup in only 30 minutes, so he has enough time for everything else.

“A typical night is me taking a shower, preparing myself mentally, picking songs, and then getting dressed, and all of that takes a few hours. Then I come here, doing the final touch-ups which is doing lashes and lips usually or I’ll get dressed here if I’m doing social. After that, we put our names on the list, get our songs in, go perform, change, and perform again, and we drink a little,” Robinson said. “A lot of time is also just interacting with people, taking pictures, things like that, just having a good time. Because drag is all about fun at the end of the day.”

Robinson performs up to three times a week, which is a lot, especially when he does shows in different cities.

“Besides Iowa City, I love performing in Chicago. The audience is just super hype and they’re really passionate about drag queens so that’s beautiful to see. Not to say that they’re not passionate here, but it’s just a different type of energy, different types of people. They’re a little more vocal during the show,” Robinson said.

In Chicago, the audience is usually around 300 people. Comparatively, Iowa City shows tend to be around 150. Regardless of the number of people, Robinson always performs the same way.

Robinson’s biggest advice for people wanting to get into drag is to shop at thrift stores, become active on social media, specifically Instagram and YouTube, and keep finding opportunities to perform and do drag.

“If drag is really something you want to do, you’ll do it. You’ll find a way. I actually love to do this, I love to perform, so it was just a matter of, ‘You’re gonna perform no matter what, so you’re gonna find a way to look good,’” Robinson said. “It’s definitely harder for young people who aren’t of age because a lot of time, drag happens in bars. However, here at Studio 13, you can be nineteen and perform. YouTube is also your friend if you love performing. Like, somebody out there will watch it. Create Instagram accounts. People love drag these days as you can see in ‘RuPaul’s Drag Race,’ for example, which has really taken off even more the last couple years. So there’s a lot more doors opening for people wanting to do drag.”