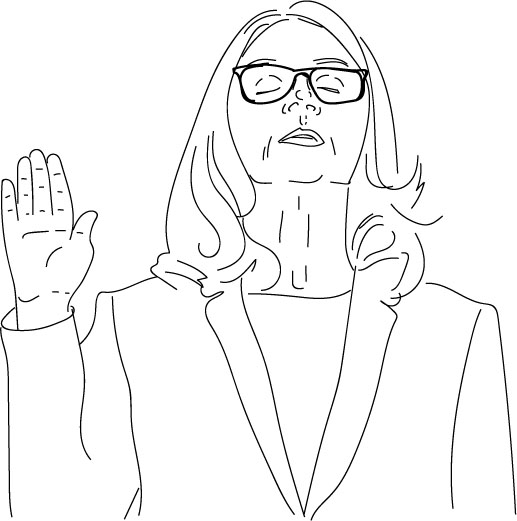 The recent Senate hearings to confirm Judge Kavanaugh to the Supreme Court have caused controversy.

Without evidence, who should be believed?

Throughout history, survivors of sexual violence have been forced into silence, scared that nobody would believe them, that no action would be taken, that they would be blamed and ridiculed, lose their jobs, and even be ostracized from their communities. Although the #MeToo movement has had an impact on decreasing the feeling of hopelessness in survivors–made obvious by the hundreds of survivors who came out with accusations of over 400 perpetrators with power, each gaining strength and courage from the last–it has far from fixed the problem of the silencing of survivors of sexual violence. When a survivor of sexual violence comes forward with their story, they must be believed. Follow-ups and investigations should surely confirm the truth behind them, but denying the allegations at their first presentation makes it nearly impossible for any of them to have an impact on the lives of the perpetrator(s) after they occur, and ensures that the survivors will keep their story and pain to themselves in the future. When Dr. Christine Blasey Ford accused then-United States Circuit Court Judge Brett Kavanaugh of sexual assault in September, she stated straight from the start that she had no desire to do so, that she was terrified and was only doing so because she believed it was her “civic duty.”

“My family and I have been the target of constant harassment and death threats. I have been called the [vilest] and [most] hateful names imaginable. These messages, while far fewer than the expressions of support have been terrifying to receive and have rocked me to my core,” Dr. Ford said during her testimony. She was not looking to personally attack him, to smear his reputation, nor was she politically motivated. She was not looking for fame or attention, either. On the contrary, her story became public without her consent and only then did she decide to come forward with her name. She came out to reveal the truth about what Kavanaugh had done to her over 30 years ago because she is still impacted by it today. There is no reason to think that one would go through so much pain and hardship to lie to their country when they had nothing to gain.

Of the sexual assault charges reported, less than one percent of the perpetrators will end up going to jail or prison. In addition to reports to authorities not always being followed by significant actions, most do not even ever get reported. According to a Stanford University study, only about 40 percent of rapes and related sex charges are ever reported to the police. Of these reported, only about two percent of them are determined to be false, the same percentage as for other felonies, according to the same study. The chances of someone being falsely accused of rape or a related sex charge are so slim that it would be absolutely unreasonable for the immediate response to hearing an accusation be the assumption of falsehood.

False accusations are incredibly rare, but they do occur. However, when they do, the effects that they have on the accused are by no possible means worse than the effects of sexual violence on the survivors. It does not keep the accused from achieving their goals or take them away from their jobs. There are hundreds of examples of this, but the few that come to mind are some of the most powerful people in our country. The President of the United States has been accused of 22 instances of sexual misconduct, according to Business Insider; both Brett Kavanaugh and Clarence Thomas sit on the highest court in the country after nationally-known accusations of attempted rape and sexual harassment respectively. The actions of the President, Kavanaugh, and Thomas did not inflict the same amount of harm to the survivors. They should not all be grouped together and assumed to have the same effects. However, it is important to keep in mind that these accusations could all be grouped together in terms of how they were treated: they were deemed to be not important enough to keep them from gaining the power that they desired. But if a person experiences sexual violence, they can go through PTSD, have higher chances of engaging in criminal behavior, eating disorders, anxiety, depression, attempted or completed suicide, and many others, according to the CDC.

Although it may be tempting to doubt a survivor when they first become open about their experience because it may be hard to believe, it is vital to the health of our society that we believe them at first. Looking closer into, or investigating if necessary, the accusations is never a bad idea, but the research must come after an initial act of acknowledgment of the accusation. If stories of sexual harassment, assault, rape, or related behavior are denied the time and mental energy of the public when they come out, they will decrease even further from where they already are in terms of rates of reports, and this will do nothing but put the people in our society at higher risks of experiencing such pain.

On September 16, Dr. Christine Blasey Ford publicly accused then-United States Circuit Court Judge Brett Kavanaugh of physical and sexual assault. Shortly after, Kavanaugh strongly denied that he had ever committed the acts he was accused of. I and many others believe that we should reserve our judgment of the accused until they have been given a fair trial. One of our nation’s most important beliefs is that everyone in the United States has the right to be presumed innocent until their guilt is proven. When one asks the question, “I\s Kavanaugh guilty?” they are presuming that there is a definite answer to this–something only a conclusive investigation can reveal.

As for investigations, there have been quite a few. Most recently, the FBI conducted a round of interviews that did not reveal any evidence of misconduct–much like the previous six he has been subject to, which were insisted upon by both Democrats and Republicans alike. Rachel Mitchell, a public prosecutor from Arizona, was brought in to question both Ford and Kavanaugh. She was chosen because while working as the chief of the Special Victims Division in Arizona, she accumulated decades of experience prosecuting sex crimes. Mitchell later wrote, “A ‘he said, she said’ case is incredibly difficult to prove. But this case is even weaker than that. Dr. Ford identified other witnesses to the event, and those witnesses either refuted her allegations or failed to corroborate them.” She then went on to say, “I do not think that a reasonable prosecutor would bring this case based on the evidence before the Committee. Nor do I believe that this evidence is sufficient to satisfy the preponderance-of-the-evidence standard.”

There has been further evidence to the difficulty of opening a police investigation into the allegations against Kavanaugh. For one, Ford herself has not filed a police complaint against him, and Montgomery County chief prosecutor Lisae Jordan indicates that it is key to do so in cases of sexual misconduct or assault. “You’re risking re-traumatizing them again. It would be an even worse idea in cases like this, where detectives would know they’d have very serious legal issues to overcome,” she remarked, referencing the allegations Ford has brought. While not all victims of sexual crimes are comfortable with directly confronting their abuser, Ford testified in front of the Senate on September 27th to support her accusations. It is curious, then, that she would not also seek assistance from the police where the alleged assault took place. At least one charge that Justice Kavanaugh could be tried for is outside the scope of the statute of limitations–assault with intent to rape, which fits Dr. Ford’s description. Maryland police, however, say that she has yet to file any criminal complaint against him.

It is unquestionably important to take allegations of sexual assault seriously, but believing them without evidence is a dangerous thing to do. The hashtag “believe women,” while well-intentioned, has the consequences of implying that an investigation is not necessary for accusations of sexual assault brought by a woman. The only things more damaging than being accused of sexual assault are the effects of a public presumption of guilt. Ross Bullock was 38 years old when he decided to take his own life. He was accused of raping a woman after they had met at his workplace and engaged in sexual conduct, despite text messages between the two proving the encounter was consensual. After months of torment and anguish, Ross Bullock hanged himself.

Ford had three decades to pursue legal action against Kavanaugh with reasonable diligence, but choose not to.  By the time her stale claim is litigated, Kavanaugh may have lost information important to his defense. This further tips the scales to favor the defendant, which is reasonable to believe in a court system that dictates the burden of proof belongs to the accuser and not the accused. As Americans, we must strive to find a balance between the rights of the accused and those owed to the victims, but without a rigorous consideration of the facts, we can’t make that decision. If we cannot prove his guilt, we must presume his innocence.