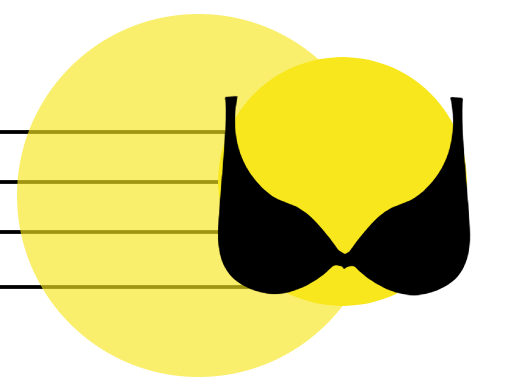 The first thing Ali Herdliska ‘20 does after school each day is relieve her constant back pain by lying down. After eight hours of sitting in a desk at school with five-minute breaks every 49 minutes, four pounds of breast tissue weighing down on her neck and back, she is finally free.

“I feel like I’m constantly hunching over,” Herdliska said.

50% of women with DD breasts or higher feel constant pain, according to Everyday Health. Herdliska has a 34DDD cup size. Coming from a family with bad backs, this extra weight adds onto her already existing pain.

“Once I hit double or triple D’s my back started hurting,” Herdliska said. “Then I was like, ‘Okay, I actually have to consider [surgery] because I can’t sleep at night because it hurts so bad.’”

The most common age at which to get a breast reduction surgery is in one’s 20s or 30s, but the never-ending pain is too much for some to take.

“I couldn’t [deal with it],” Deborah* said. “My shoulder grooves were actual divots in my skin at this point; they were always red and it was deep.”

In the summer of 2018, Deborah made the decision to discuss reduction mammaplasty with her doctor, the removal of breast tissue to relieve pain—a procedure that would change her life forever. In just the fourth grade, she started wearing training bras. A few years later, Deborah wore a D cup.

“Once a month, maybe twice a month, I would go to Victoria’s Secret just to [check my size],” Deborah said. “Every time I went there, they said, ‘Oh, yeah, new cup size, new band size.’ Just what I needed.”

The summer of seventh grade, Deborah went up to an H-cup size.

“I didn’t really know what was happening,” Deborah said. “I just kind of let it.”

In the heat of the summer, Deborah’s developing discomfort led to a conversation with her mother about this change. Large breasts run in Deborah’s family, but hers were abnormally large, having gone from a D to an H in less than a year; now, she was combating problems her mother never knew about.

Deborah’s problems were no longer just about physical discomfort; now she was feeling more self conscious. Until the eighth grade, Deborah attended Regina where she was dress-coded multiple times for having as little as a single undone button on her uniform.

Set apart from the rest of her classmates, Deborah began thinking about her image more.

“Dressing appropriately for one’s boobs doesn’t cross a lot of people’s minds, but it always crossed mine,” Deborah said.

After being sexualized at a young age, teachers and fellow students’ comments had a huge effect on her self confidence and style.

“I’ve been doing that my whole life, wearing compressive bras and baggy clothes on top of that so it doesn’t look like I have huge boobs,” Deborah said.

Many things contributed to Deborah’s decision to have breast reduction surgery, including intense neck and back pain that was only relieved with hot showers. The main reason was a simple thing: walking up or down stairs.

“I’m not out of shape or anything,” Deborah said. “My boobs would go up and down no matter how much support I wore, so I would grab books out of my bag and hold them in front of me so I could put compression [on them].”

Finding people to sympathize with about these issues was hard for Deborah. Once she left Regina, she noticed more people in the same situation as her but found that other students couldn’t formulate their feelings and pain into words. Herdliska has always talked about the topic with her aunt, who has never gotten the procedure but would love to and supports Herdliska with any decision.

“I remember being in a lot of pain. It gradually started from a little, middle-of-the-back pain and rose to my shoulders,” Herdliska said. “If I get a size bigger, I am a hundred percent getting a breast reduction surgery.”

After bringing the subject up with her family, Herdliska was recommended to begin reporting the pain to her doctor before requesting information about the surgery. One concern of Herdliska’s is having to catch up on missed work after being gone from school after the surgery. After spending a couple of days in the hospital, it takes two to six weeks to fully recover from breast reduction surgery, with one to two weeks home from school or work. The cost and final result is also a worry for Herdliska.

“This is something being taken off me…what if I don’t like it at the end?” Herdliska said. “What if insurance doesn’t cover it? It’s just all these thoughts and it’s scary.”

According to Patrick Hawkes a plastic surgeon at the University of Iowa, insurance will cover the procedure as long as it meets the insurance policy on the issue. Herdliska is not in any rush; for the moment, she is trying to adjust to the pain.

“It’s just always there,” Herdliska said. “So I better just get used to it rather than complain about it.”

“I got a little nervous that people would be able to tell, though,” Deborah said.

Due to this concern, Deborah’s doctors recommended to continue wearing sweatshirts and oversized clothing. Deborah rejected this notion.

“I kind of want to embrace it, but I also didn’t want to because I don’t want people to say I did it for vanity reasons,” Deborah said. “I did it for my health, to get a better life out of it.”

Deborah said she has gotten a better life out of it. From being able to wear bralettes to walking up the stairs without a textbook handy, she recommends looking into the procedure if going through similar issues.

“I feel a lot more confident in my everyday life…with everything,” Deborah said.

One Response to “Sizing Down”