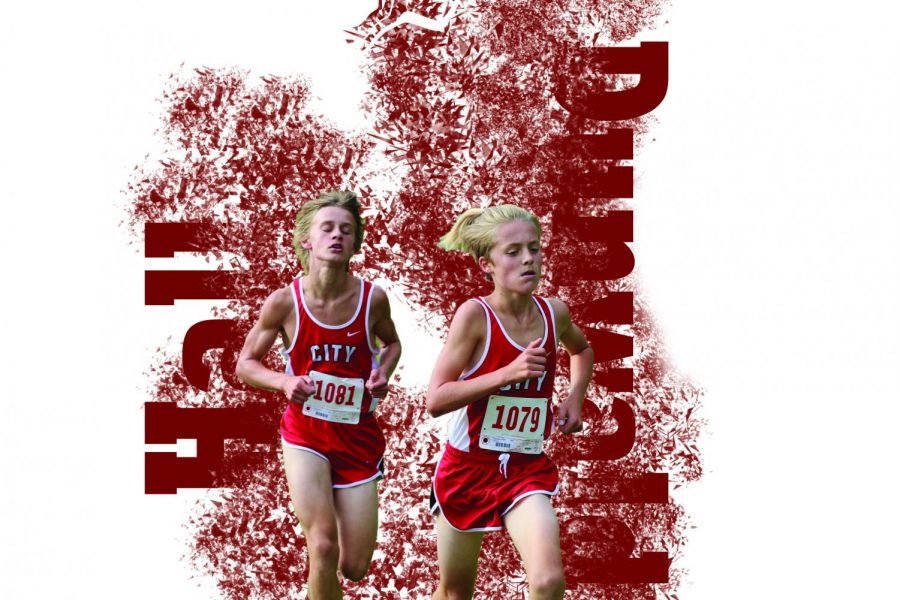 Cross Country is often considered a solo sport, but for Elliot Dunwald and Sullivan Hull, quite the opposite is true. In a season filled with a certain level of disappointment for both teams, these two varsity athletes kept each other going.

“To see Elliot right in front of me, I know I can’t drop behind him,” Hull said. “I just subconsciously know that I gotta stay with him. I see it happening with tons of other people on the team as well, they’ll just stick together, and I think that’s really incredible because packing up is one of the best strategies to do in XC. It just forces people to stay together, to cheer each other on. Ultimately you will finish better and get better times and just be more happy with yourself in general.”

Hull and Dunwald, along with fellow classmate Parker Max, were all placed on the varsity team as freshmen. Each distinguished themselves by their speeds, but Hull and Dunwald could always be seen racing side by side in meets. In fact, their PRs are less than six seconds apart.

“It’s funny because I would do all the pacing for the first three miles, but then he’d kick,” Dunwald said. “He’d pace me on the sprinting part but I’d pace him for those first three miles. The goal was always to beat him but I didn’t really think like that. He just had that sprint that I didn’t have. It was kind of cool because in some of those races I wouldn’t have sped up if he didn’t speed up.”

Coming into high school cross country, the pressure was on for these two to prove themselves. Normally younger athletes do not make up such a large percentage of the varsity squad.

“I’m not sure I was ready,” Dunwald said. “One day coach calls me into his office and tells me that I’m running varsity on saturday. Now I’m used to it, but it was a really quick jump right to the big change. Definitely nerve wracking.”

But Hull and Dunwald pushed past the intimidation that comes from interacting with upperclassmen to be successful.

“That’s the best thing in the world,” Hull said. “Especially when older kids respect you so its just feels amazing. It’s not only me, Elliot and Parker are really good too.”

To perform at such a high level, these two freshmen have to train intensely for the season. Part of this means participating in track as well as XC. As excited as they are to test their skills on the track however, the two prefer XC, as they feel the team is tighter knit.

“Everyone is a lot more serious in track, you’re going to have to do multiple things during a meet so everyone is just not having as much fun,” Hull said. “But in XC it’s one of the greatest feelings in the world to finish a race with people cheering you on and you know no matter how good or bad you do in it they’ll still respect you. It’s just one of the coolest things you can do as a person to participate in sports like this where you can just relax and have fun the whole time. That’s how all sports should be I think.”

According to Sull and Dunwald however, this support system doesn’t stop with the athletes. Both were coached by Ross Salinas, mushroom enthusiast and varsity mentor.

“He is the nicest guy you’ll ever know,” Hull said. “He is one of the best coaches I’ve ever had. Just the way he runs and talks to you makes you want to run with him even if you’re not at that level yet. I remember one time we were running seven sisters, and I was dead on the way back, and he just told me to stay next to him and I did the entire time. It hurt but he made me want to keep going with him.”

This motivation was picked up on by the other varsity athletes, and the two freshmen often found themselves sticking together during workouts as a way to interact in a group dominated by upperclassmen.

“If you’re by yourself it’s really hard. Sometimes [the upperclassmen would try to] outwork me and then sometimes I’d try and outwork them,” Dunwald said. “[Sully and I] hit it off together. I think it would be really hard if it was just me by myself or Sully by himself. It’s a lot of pressure by yourself, and when you race together, you have someone to lean on.”

It didn’t start out this way though. When the two first became teammates in junior high, Hull was running much slower times than he is today.

“In seventh grade he wasn’t very good at running,” Dunwald said. “In track season he kind of came out of nowhere, he started running really fast times. It’s pretty cool how he’s improved.”

“I started off running not a lot at all. I was still embarrassed to be on the team,” Hull said. “I didn’t think I was going to improve I thought I was just going to stay behind in the pack. I ran every single day over the summer. I just trained as much as I could and saw the effect. I always knew I put in the hard work but to see my friends cheering me on it was such a great feeling.”

These two freshmen are more than just teammates however. Cross Country has helped them develop a stronger friendship.

“He’s really nice. We do a lot of stuff, more than just running, we have a lot of classes together,” Dunwald said. “When you go through all that stuff in xc together, and then go to normal life, it’s a lot easier.”

Another thing the two have in common is their shorter stature. Both are still growing, but they don’t let a shorter stride length impact their running. In fact, this is another reason they enjoy the sport so much.

“I love the mental aspect of it,” Dunwald said. “You can go into football and be really big and strong but you can’t do the stuff you can in XC. It’s a different world. You can be really skinny like I am and really small, but still be better than a lot of people. I have a smaller upper body which is why I’m smaller but I don’t really think about it that much because now I know it doesn’t matter.”

In the end, knowing they can count on each other is what drove them to being the fifth and sixth runners on the team. In their first year of racing 5ks, Hull and Dunwald clocked in at 18:06 and 18:12 respectively. With three more seasons to go, as much as they will contribute to the program in years to come, they know the sport has already impacted their lives and their friendship in a fundamental way.

“Elliot is just incredible. I feel like he should be getting way more credit than me, because he’s the one who actually pulls through and perseveres more than I do, so I want to thank him for that,” Hull said. “As for me, cross country has taught me perseverance because even if you feel like you want to quit, even if your body is hurting all over, you just gotta keep pushing yourself. It’s not just for you, it’s to show everyone that you can persevere, that you have the ability to try your hardest every single time.”