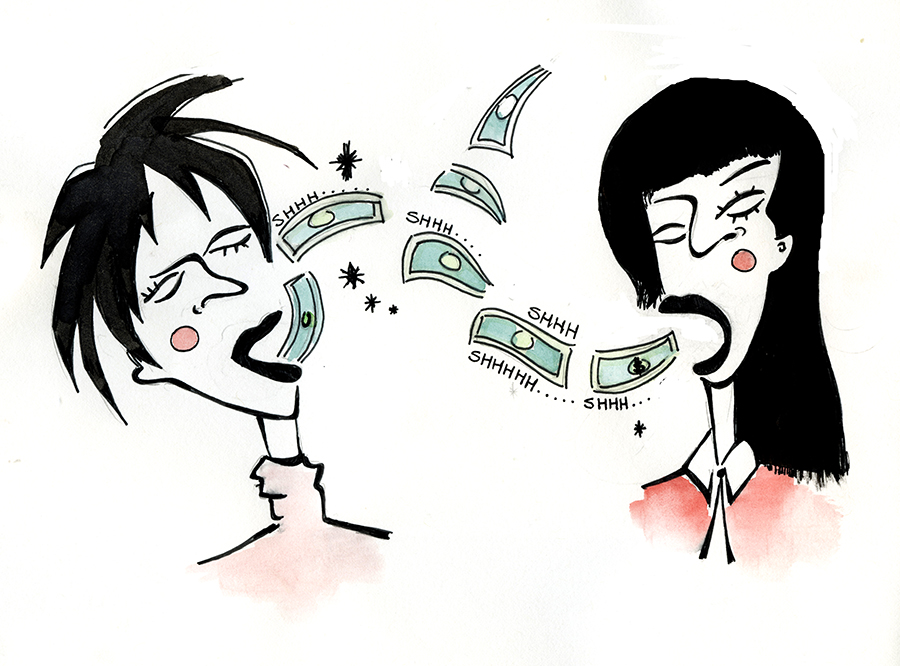 A founding principle of American democracy is that using your vote is an integral step in creating significant change in the country and that engaging in the political system is effective and worthwhile. However, this ideal seems to ring hollow when you consider that the median income in America is $31,786 and more than $24,000,000 was spent on the 2018 midterm elections. This money comes not from the majority of people in America, but from big corporations and the richest of the rich who want to control the political system with their insurmountable wealth, not giving any heed to the will of the people.

Money is used in many ways to influence politics, but one of the popular forms is through Political Action Committees (PACs), which are organizations that collect campaign contributions and are able to give and spend money on behalf of a political campaign. Money’s power is as well exerted through Super PACs, which have far less regulation than normal PACs but also aren’t allowed to directly give money to candidates, only spend money on their behalf. However, this slight caveat does little to nothing to restrict their power.

The most important distinction between PACs and Super PACs is that normal PACs have bans on taking corporate and union money and limits on how much money can be given, while Super PACs do not. This means that multi-million- and multi-billion-dollar companies are allowed to give unlimited amounts of money to these Super PACs, which are then allowed to spend that money however they want to, as long as they aren’t giving the money to a candidate and are not in direct contact with that candidate. However, this latter restriction does little to rein in their power, because though they aren’t allowed to make direct contact, campaigns are allowed to use intermediaries to communicate with Super PAC officials and they can also communicate using public media.

To give an example of the scope and power that Super PACs have over PACs, consider that Super PACs only came into existence in 2010. In the 2008 presidential election, the top nine PACs, including money from both parties, raised just under 26 million dollars. In 2012, Mitt Romney, the Republican presidential candidate, was supported by a Super PAC which alone spent 40 million dollars on his campaign.

With these astronomical amounts of money, it’s no wonder that many candidates on both sides of the political aisle are drawn into accepting these donations, regardless of the ethical questions that may arise. These groups don’t gain much public attention, but they can have far more influence than the organizations that make headlines for giving large sums of money. For example, the National Rifle Association has drawn a large amount of criticism for spending just over nine million dollars on politics in 2018. However, this number pales in comparison to companies like Bloomberg LP, a tech company, which spent over 62 million dollars in contributions, the vast majority of which, 59 million dollars, was given to organizations like Super PACs.

However, not all politicians are willing to be corrupted by the donations of big corporations, PACs, and contributions from the wealthy. Bernie Sanders made waves in the 2016 presidential primaries with his boast of his average campaign donation being just $27, in addition to his refusal to accept PAC money. Many candidates fell in line with this course of action in the 2018 midterms. More than 180 Democrats and two Republicans who ran for Congress this past fall pledged to reject PAC donations. However, these numbers still make up a very small minority of the entire field of candidates, even though 96 percent of Americans blame “money in politics” as a cause for some or much of the dysfunction in the U.S. political system, according to a Washington Post/University of Maryland poll done in the fall of 2017.

One of the better-known candidates who refused to accept PAC money was democratic socialist and newly elected representative from New York Alexandria Ocasio-Cortez. She defeated Joe Crowley, the former fourth-ranking Democrat in the House of Representatives, who took $1.7 million during 2018 and $12 million over the course of his entire career. Even candidates who did not win their elections still contributed to the growing wave of support behind minimizing the amount corruption within our political process. Beto O’Rourke, who ran against Texas Senator Ted Cruz, did not win, but continued to inspired the Democratic party more than almost any other candidate despite his loss, gaining national attention from all and affection from liberals. O’Rourke, like Sanders and Cortez, refused to accept PAC money.

But these figures exist not only on the national level, but right here in Iowa’s state elections. In the most recent midterm election, Jodi Clemens ran in Iowa’s 73rd House District against incumbent Bobby Kaufmann. Despite her loss, she was still able to motivate Democrats in the area to action as well as create hope for Iowa Democrats in the future…all without taking a dollar of PAC money.

While observing the growing popularity in turning down money from large corporations and PACs, one can only wonder what steps can be taken to reduce the amount of power they have in our political system, and therefore revive the democracy that has been slipping away in the last decade, since the creation of Super PACs, by giving the power back to the votes of average Americans.

The seemingly obvious and simple solution would be to create federal laws banning Super PACs, placing more restrictions on regular PACs, and banning the donations of corporations in politics. However, these sorts of restrictions are not possible under the current interpretations of campaign finance law under the Supreme Court, and considering that the Supreme Court has recently become more conservative with the addition of Justice Kavanaugh, the potential that anything will be changed legally in the foreseeable future only dwindles further. However, that does not mean that all hope should be lost. The only possible way to lift the corruption of corporate money on politics within the bounds of current law is to convince politicians to stop taking corporate and PAC money and rely purely on individual campaign contributions. This can only be done by refusing to support, whether through your money or your vote, politicians who subvert the will of the people by accepting the taint of corporate wealth. But there should be no delusion in the fact that the road to this ideal will be long and hard, and given the extensive reach of the power of money in politics, these efforts might be bound to fail despite their inherent merit.