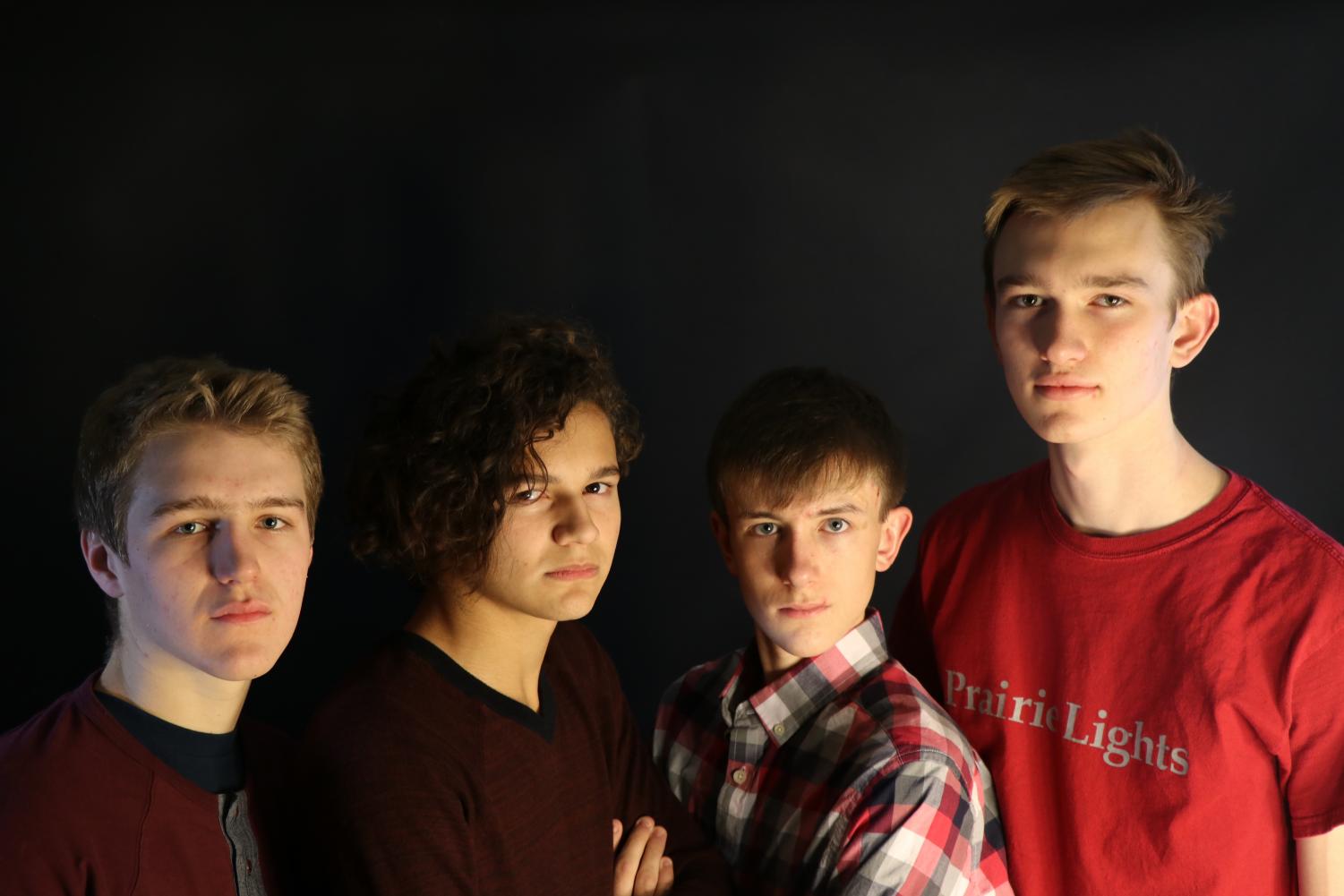 The sauce first originated their junior year and has been an iconic City High staple ever since. (Nina Lavezzo-Stecopoulos)

The sauce first originated their junior year and has been an iconic City High staple ever since.

In a haze of fumes the Capsaicin Bros dice, blend, and sanitize. Heat fills the room. After all the work is done, their product, Death Wish, is what’s left.

Mitchell Wilkes ‘20, Paul Cornell ‘20, Anthony Murphy ‘20 and Noah Weaver ‘20 make up the Capsaicin Brothers. Their product, Death Wish, has grown in distribution throughout the City High community. It all started when Wilkes decided to plant a ghost pepper. Then he moved to Carolina Reapers and Death Wish was born.

“You don’t really need to do anything. You just put [the peppers] in the ground and they grow. If you get them in the spring, they’re ready in the fall to be picked,” Wilkes said.

The plan to create a product first began with Wilkes and Murphy. From there they enlisted Cornell because of his culinary experience. One year into the process, Weaver joined the group.

“It’s always nice having interns because they can run and get you coffee,” Murphy joked. “It was more of a social thing to start with. Adding more people meant the more the merrier. It created a little more of a fun environment. And then when someone was busy we still have a third person to hang out with.”

“A lot of people like this season’s Death Wish more than Mouth Melter–for the spice, not the flavor,” Murphy said. “Last year we focused on getting a sweeter flavor, like a habanero hot sauce, but this year Mitch really wanted to make it pop and have it be the spiciest hot sauce. The feedback on the spice over the flavor was good.”

The sauce certainly pops; while there are fans of the sauce, many find the spice almost overpowering.

“It burns the nostrils,” Beth Fettweis, an English teacher at City High, said. “My whole mouth is on fire. I think there might be a sore on my tongue. Oh, I’m sweating!”

“My whole mouth is burning,” AJ Lehman said. [Lehman’s position. “How do you even eat that? I’m crying. Oh my God I didn’t know a Carolina Reaper was in there.”

Murphy, Cornell, Wilkes and Weaver recommend adding the sauce to certain dishes in order to add a little spice.

“Last year, I put [the hot sauce] on more foods because it was more flavorful than the spice,” Murphy said. “This year I generally only put it on certain dishes, like tacos or enchiladas.”

It’s a long process until the product is complete. The hot sauce is made by first growing the peppers throughout the summer. Then the Capsaicin Bros get together at Wilkes’s house to make the sauce. They sanitize the bottles by boiling them. The whole process takes about an hour. They cut up the peppers, then boil them down, then blend them with the other ingredients, and tweak the taste as they go.

“Last year we definitely focused more on the flavor, but this year we were focused on the spiciness of it. We had to accept that if you want to make it spicy you aren’t going to take actual flavor from it. We had to make that trade-off,” Cornell said.

The consumer feedback has also impacted the hot sauce.

“We got a recommendation from one of our cross country coaches, Salinas, who recommended apple cider vinegar to give it a better flavor,” Weaver said.

The Capsaicin Bros have done their homework to make sure that the hot sauce has an extensive shelf life.

The acidity allows the hot sauce to last longer. Though it may seem like a smooth process, there are a lot of steps–some easy, some difficult.

“We make it in the kitchen. When you wash out [the blender], the fumes get into the air and it’s pretty horrible,” Wilkes said.

Each of the Capsaicin Bros have different focuses. Wilkes is all about growing the peppers. He is the leader of the project. Murphy comes up with clever names and ways to get out information about Death Wish. He is also the unofficial model of the group and poses with the bottles of Death Wish for their ads. Cornell focuses on the flavor, and Weaver works with liability forms. Each person who tries the hot sauce is supposed to sign the release waiver. It alerts them of the heat of the hot sauce and cautions them to eat it carefully.

“I started crying in the middle of Spanish,” Daphne Knoop ‘20 said. “I tasted it for a solid 25 minutes and I was crying for a solid 20 minutes.”

As the Capsaicin Bros have worked with the peppers, their knowledge has grown. Through research they’ve found that the way people taste spiciness is not actually through their taste receptors, but through their pain receptors.

“It’s the chemical in hot things that make them spicy. It tricks your neurons into thinking that there’s actual heat,” Murphy said.

The bottles sell out fast, snatched up by teenagers eager to try spice. The Capsaicin Bros each get a share of the bottles, which they sell for five dollars. Wilkes also sells the dehydrated peppers for two dollars. The total usually comes out to a profit of $25 for each of them.

“I sold my share of the bottles in the first two or three days,” Wilkes said.

While most of the guys are content to keep things small with the business, Murphy wants to go bigger.

“We have something going here that could be a product. I think if we took it to a market, like a farmers’ market or a co-op, and expanded how we make it we could make it into a business that would profit,” Murphy said.

The Capsaicin Bros have had many responses from customers, but the most memorable one was about someone who ate a full dehydrated pepper.

“One guy last year ate a whole pepper straight up. He was on the ground throwing up and I think he actually did have to go to the hospital. Most people taste the hot sauce and have an appropriate amount, but some people overload,” Weaver said.

The Capsaicin Bros have learned a lot through this business venture.

“[I’ve learned how] simple yet difficult it is to make a business,” Murphy said. “Although it’s not a big business or something permanent I like to treat it as one. It’s a good way to bond with friends and get connected to people I rarely talk to when they buy the product. I also realized that since we will be graduating soon this will most likely have to end after next year. I don’t know if I should say it taught me how to let go or that all things good come to an end, but it’s definitely something sad to me.”

In the end, it all comes down to the four guys behind the hot sauce.

“Teamwork wasn’t really an problem with us from the beginning since we all know each other beforehand,” Murphy said. “There were a couple of bumps along the way; like choosing the names, recipe, and how we want the sauce to turn out. The photos are always a time-consuming struggle, trying to find the perfect photo for advertising. The best thing it’s taught me is that no matter what we’re doing, it’ll be fun, since it’s all a social thing in the end.”