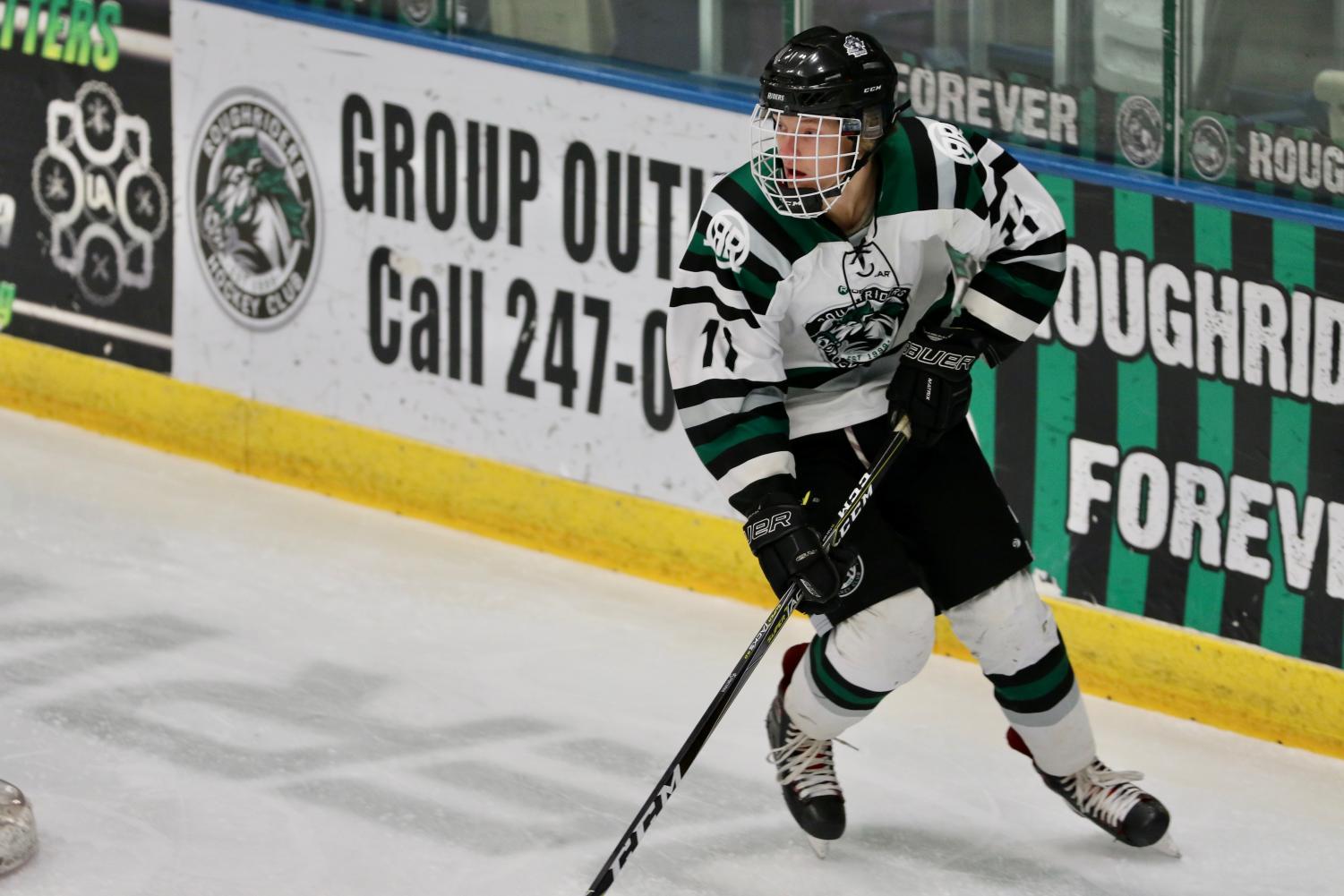 While most teenagers spend their afternoons doing homework or seeing friends, three City High students spend hours a week in Cedar Rapids, honing their hockey skills as a part of the Roughriders, a team that allows high school students to play the popular winter sport 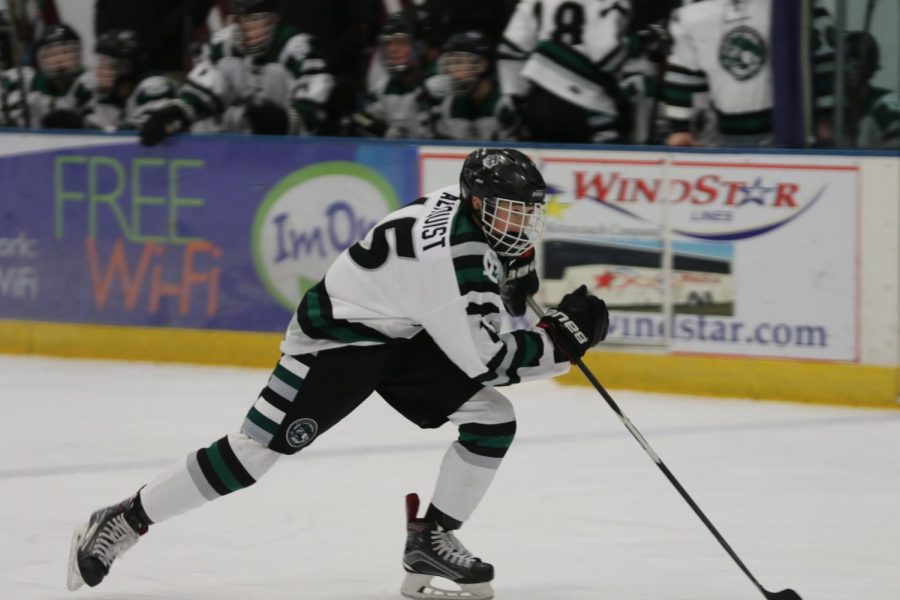 As the Roughriders take the ice, skates slashing across the freshly Zamboni-ed and sparkling ice, pucks skitter from one player to another, preparing for the hours to come. Boys call to each other, teasing and coordinating their movements. A call from the coach stops them in their tracks as their focus shifts. It’s time for practice.

“I was seven when I started playing and I became goalie when I was nine,” Ethan Snee ‘19 said. “My cousins live in Minnesota and my dad used to play hockey. That’s how I got introduced [to] skating and that led to playing in Iowa City.”

Such an early introduction to hockey is a common story for the Roughriders,

many of whom have had hockey as an integral part of their life from a very young age.

“I started playing when I was five years old and I have played defense nearly my whole life,” Luke Edwards ‘20 said. “I learned a lot more about the game and lots of life lessons when I was younger playing hockey.”

But despite dedication from players in the past present, the Roughriders have had struggles with previous coaching staff, which resulted in a coaching change three years ago with the hope of greater success.

“[Our current coaching staff] took over the program three years ago and the year before that [the Roughriders] won zero games,” current coach Tony Paoli said. “So we’re building a program brick by brick and that’s what we’re looking forward to doing, continuing to build so that we have a legacy.”

And the results are showing. In three years, the team has gone from not winning a single game to being competitive, having the most goals per game in their league and having three of their players in the top 10 scorers in the league. In fact, in one of their most recent games, The Roughriders defeated last year’s Division Two champions, the Sioux City Metros, in overtime, showing that their hopes are not unfounded.

“This year our team goals are to win in our league and have the best record in Iowa so we can go to Nationals,” said Edwards.

However, their goals for the season are deeper than what one can quantify in win-loss columns. Members of the team have been working to establish habits for long-term success while taking care to focus on getting the most benefit out of each day that they play. A typical practice may include exercises such as what is called “two on two pearl,” wherein players attempt to recreate a multitude of game conditions by players rotating, playing two on two against each other.

“We have many expectations for the season but [our number one goal] is to get better each day. We take it one day at a time practice and games,” said Paoli. “They’ve been working hard for the last three years and I think that this could be a good year for us.”

In order to achieve their season expectations, coaches have focused on creating focused, disciplined players, both on and off of the rink.

“We focus on work ethic a lot. There are punishments if you’re not putting in 100%, and the coaches can tell that,” Snee said. “I think they try to push staying disciplined and thinking with your head and focusing on plays and focusing in life, not only being a better hockey player but a better person.”

And overcoming the wide arrange of struggles that players have requires a strong work ethic, with players attending several practices a week and games most weekends. Many players have unique struggles, too.

“My biggest struggle is my size, especially in high school,” said Luis Abreu ‘20. “I’m 5’1” and about 125 or 130 pounds, and there are some players on my team and others that are over 6 foot and 200 pounds, so that creates pretty big challenges.”

The commitment isn’t just limited to how much work they put in on the ice during practice, though. It’s also shown through the sacrifices that they make off the ice.

“The main difficulty is that it takes up a lot of time. We practice four nights a week and most nights I don’t get home until 11,” said Edwards ”We also have games almost every weekend and then [it could be]if it’s an away game with traveling a lot out of town or out of state, so the time is definitely the most difficult part.”

Coaches have also noticed that in recent years the focus on sports, and hockey in general, has decreased due to a multitude of factors, including teens having far more busy lives clustered with lots of homework and other activities outside of class.

“I think in this day and age there are so many other things that are going on outside of hockey. There are a multitude of activities and I think that one of the big things is [extracurriculars],” said Paoli. “There are so many different things out there and so everyone’s not always a hundred percent into the team.”

Internal changes within the sport in general has also caused changes in how the game is played. Some coaches believe that the increased amount of extracurriculars caused distractions with players, and that social media has changed how players view their roles in the game and on their team.

“I think one of the most difficult parts of coaching hockey is in this day and age with social media is that everyone wants to be an all-star,” said Paoli. “Everyone wants to get all the accolades and building a team so that the team comes first and the individual stuff comes later is always a challenge.”

Despite these newfound issues, the inherent love for the sport and the enjoyment that players can get out of it remains strong as players strive to improve.

“I feel proud that I play hockey,” said Snee. “Once you’re playing most of your life, you want to showcase that and you put a lot of work into it for your whole life. You’re just trying to get better and reach the next level.”

This pride is strengthened by a tightly-knit community. Although hockey is not as widely-played as many other sports around America, those who play it attest that it helps creates bonds among players that may rival or surpass those made in other sports as teams become close, creating a family within a team for some players.

“Sports can bring people together, but with hockey, there’s not a lot of people that play,” said Paoli. “It’s that love of the game [that] brings you together.”