On Their Way Up

After the fight of their lives against West, the No. 2 ranked and yet undefeated City High girls basketball team has their eyes on the prize

As the City vs West basketball game neared the end, players, fans and coaches alike were brought back to last March when the same teams went up against each other for the state title. The tension was evident as the game went into overtime with City finally winning 64 to 57. 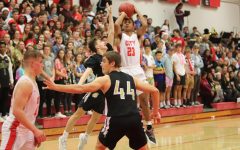 The constant neck and neck battle meant all the players had to be scoring their best. In addition to lead shooters Rose Nkumu and Aubrey Jones, Eviyon Richardson ‘22 scored a total of 20 points, the most she has ever scored in a single game.

“[The atmosphere was] loud. I couldn’t hear,” Richardson said. “It was exciting to have the adrenaline pumping through your body.”

Richardson has been playing basketball since second grade, and after making the varsity squad as a freshman is enjoying the big games that come along with playing on the varsity team.

“I feel like we’re going to have a great season,” Richardson said. “We have a good team and a good group of girls.”

While defeating the No. 6 ranked West varsity coach Bill McTaggart knows that the No. 1 ranked City still has a whole season to go.

“We’re getting there,” McTaggart said. “But we’re not there yet.”

This year, City High’s varsity basketball has four freshmen on the team, more than last year, after four seniors graduated last year. Especially after the loss of star player Ashley Jones, who set a state record as the highest scoring female basketball player and was named Miss Iowa Basketball 2018, the team knows they need new talent.

“We’re very young, we have four freshmen on the varsity team,” McTaggart said. “They’re working very hard, and they are very athletic.”

McTaggart has been pushing the girls to become better defenders, knowing that this is what will carry them to the state level.
“Kids like to get points, but nobody talks about being a great defender,” McTaggart said.

To do this, a scout team of boys, have been scrimaging against the girls team in practice. The varsity basketball team’s practices last about two hours each and the team also lifts two days a week. With the huge time commitment that entails, the academic expectations are still high. McTaggart recommends using all opportunities, including the bus rides to games, to be studying and preparing for school.

“You’ve got to be somebody that manages your time wisely because basketball is a huge commitment,” McTaggart said.
Not only do varsity players have to practice everyday and lifting twice a week, they also have games to play, some of which are far away and require missing parts school.

“Kids are [taking] AP classes and that takes up a lot of time,” McTaggart said. “So if they’re on the bus, they should be studying.”

Players have talked about learning to manage their time by making the most of class time, advisory and study halls. Andie Westlake ‘22, a freshman on the varsity team, who has been playing basketball for over ten years, has figured out how to fit everything in and still play her best.

“I try to get most of my homework done during the day and just manage my time well so that I’m not overwhelmed when I have games and practices,” Westlake said.

Westlake enjoys being a part of the varsity team and even though she thinks the team is doing well so far, sees some room for improvement.

“It’s nerve racking at some parts because I’m not really used to everything yet, but I’m happy that I made it on there,” Westlake said.
While homework, practice, lifting and competing can be a lot to manage, players say the exhilarating games and cheers from the crowd make it worthwhile.

“[Being on varsity] is fun because you’ve got big games like [City vs West] and they give you a lot of props and everything,” Richardson said.

The freshman and sophomore team is having a great start to the season having beat West 28-21 in double overtime last week.

“The goal always for us is let’s constantly get better,” Fresh/Soph Coach Lynsey Barnard said. “We do that within the game by saying let’s try and get better each quarter.”

To do this, Barnard holds high expectations for her players while also making the atmosphere as enjoyable as possible. To become better players they have competitive scrimmages during practices.

Just a few years ago, the freshman and sophomore team had only been six players. Barnard is very happy with all of the girls that came out this year.

“If you are a good teammate, the basketball skills will come,” Barnard said. “We can work on those skills a lot, but the willingness to work is the biggest part.”

She is aware that the girls on her team are busy and schoolwork has to be done. She said that in the past she has called kids in for advisory to help them communicate with their teachers or help them balance their schedule.

“Sometimes school gets overwhelming and practices hard and your coaches tough on you but I constantly remind them at the end of the day, we’re here to have fun and we’re in this together,” Barnard said. “I’m on their case a lot, but I’m also their biggest fan.”

Being a freshman can be overwhelming already, from adjusting to the homework load to making time to hang out with friends, so adding a sport can be challenging. Coming from middle school and having to learn how to play with a new group of girls can be hard.

“[The] beginning was kind of rough,” Mohammad said. “Some of the people I used to play with in junior high didn’t join basketball and I’m not used to playing with upperclassmen.”

At practice, Barnard emphasizes positivity and lifting other teammates up, even by simple, little things such as giving each other high fives.

“I’m looking for good teammates,” Barnard said. “So if you’re not having the best game or practice, are you still gonna pick each other up?”

The fresh/soph team has won three of their five games this season so far, including a win against West in double overtime.

“It’s a lot easier to work hard, if you are enjoying what you’re doing,” Barnard said.