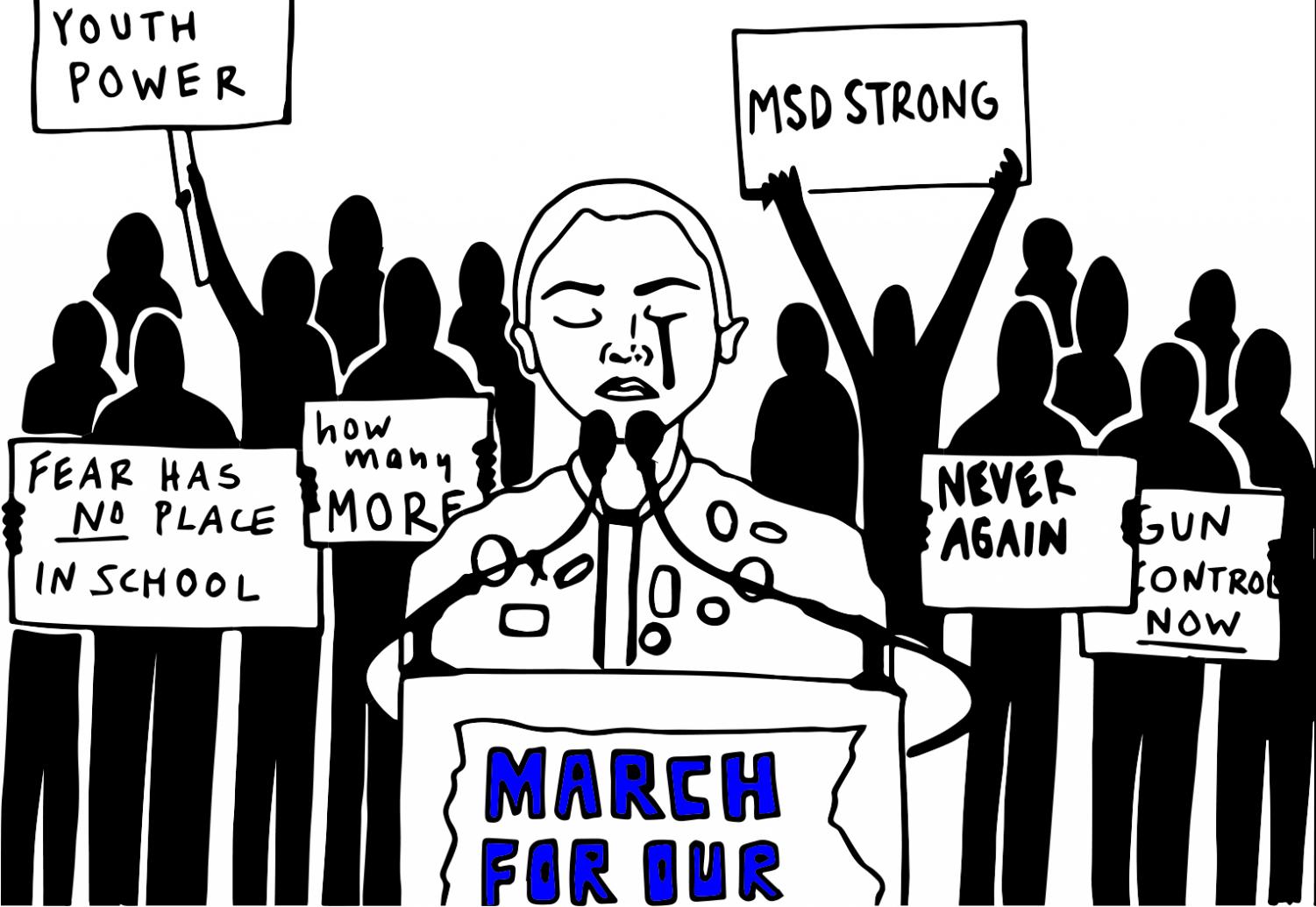 A year after Parkland, discourse around gun control has dwindled, to the detriment of all

Today is Valentine’s Day. It’s a day for cutting half-hearts out of a folded sheet, exchanging notes, candy, and flowers, a day for cheesy romance quizzes and special additions to The Little Hawk. But this day now has a far more sobering meaning as well: it’s the anniversary of one of the deadliest mass shootings in American history.

On February 14, 2018, 19-year-old Nikolas Cruz entered his alma mater, Marjory Stoneman Douglas High School in Parkland, Florida, with a semiautomatic rifle called an AR-15. He pulled the fire alarm out and began to shoot at students and faculty as they attempted to leave the building. 17 people–14 students and three faculty members–were killed: Alyssa Alhadeff, Scott Beigel, Martin Duque, Nicholas Dworet, Aaron Feis, Jaime Guttenberg, Chris Hixon, Luke Hoyer, Cara Loughran, Gina Montalto, Joaquin Oliver, Alaina Petty, Meadow Pollack, Helena Ramsay, Alex Schachter, Carmen Schentrup, and Peter Wang. Hixon, a veteran who died trying to protect students from gunfire, was the eldest at 49 years old; several of the victims were 14. 17 more were injured. One radiologist who treated the victims wrote in an article in The Atlantic that “[m]ost of them died on the spot; they had no fighting chance at life.”

In the few weeks following the shooting, anger and grief intermixed to create a movement. A group of MSD students formed Never Again MSD, organizing for common-sense gun-safety measures, like universal background checks and gun registries, in Florida and nationwide. Eventually, that movement morphed into the massive March for Our Lives, which held hundreds of marches nationwide in support of gun control. Across the country, young people, parents, communities, and advocates lobbied for change. After the success of a national school walkout, closely followed by March for Our Lives, several MSD students went on tour to promote political action and youth voter engagement, and across the nation, the spring of 2018 mobilized multitudes to speak out about gun control.

In the few weeks following the shooting, anger and grief intermixed to create a movement.”

Here in Iowa City, I, along with several other City and West students formed Students Against School Shootings (SASS) after a walkout we organized on February 19, 2018. For almost a year now, we have been working to prevent gun violence in Iowa City, in Iowa, and around our nation. We organized a March for Our Lives event last March, for which almost a thousand members of the Iowa City community turned out in a blizzard. Now, a year after the Parkland shooting, I’m policy director for SASS, and we’re still hard at work organizing in the Iowa City area.

But everything is not the same as it was a year ago. Sometime after Parkland, perhaps in the spring or summer, something shifted. Suddenly, gun control was no longer a topic of conversation; our quick news cycles moved on to other issues like romaine lettuce recalls and prospective Democratic presidential candidates. People forgot about the tragedy of the shooting at Marjory Stoneman Douglas. They forgot about the horror. The Dickey Amendment, which banned the CDC from researching gun violence, was repealed–but Congress did not allocate funds for that research, rendering the repeal toothless. Significant advances in gun-safety legislation were made in some states last year, but some states, like Iowa, have not become safer. In fact, the conservative-trifecta (conservative Republicans control the state house, senate, and hold the governorship) Iowa government is currently finding a way forward for an amendment to the Iowa Constitution that would prevent any gun-control measures from being enacted. Hope springs eternal–a bill proposing universal background checks has been introduced in the federal House–but any change to be made on this front will be an uphill battle against the political machine of organizations like the NRA. Progress comes slowly, yes, but progress cannot come when we choose to forget.

Every year on this day, without fail, we cut half-hearts out of folded sheets, exchange notes and candy and flowers, read and write special additions to The Little Hawk. But every year, too–not just today, but many, many days of the year–silent anniversaries pass us by, anniversaries of the tragedies that American society chooses to forget. On April 20, the anniversary of the mass shooting at Columbine High School, in which 15 people including the perpetrators died. On December 14, the anniversary of Sandy Hook, when we lost 20 young children and six school staff members. On June 12, the anniversary of the Pulse nightclub shooting in Orlando; on that night in 2016, 49 people were killed. On October 1, the anniversary of the mass shooting in Las Vegas, during which 59 people including the perpetrator passed on. We need to remember these devastating events as well, to honor the memories of those we have lost and to keep pushing for the change that must be made.

SASS is holding letter-writing sessions at City and West today, February 14, after school, and another on Saturday, February 16 at the Iowa City Public Library (to learn more, you can check our social media @sassiowa). Join us, and tell our elected officials: We remember Parkland. We remember Columbine. We remember Sandy Hook. We remember the grief and the loss. We remember the victims. Even though the anniversary of the shooting at MSD will come every year, tragedies of its kind don’t have to happen again.