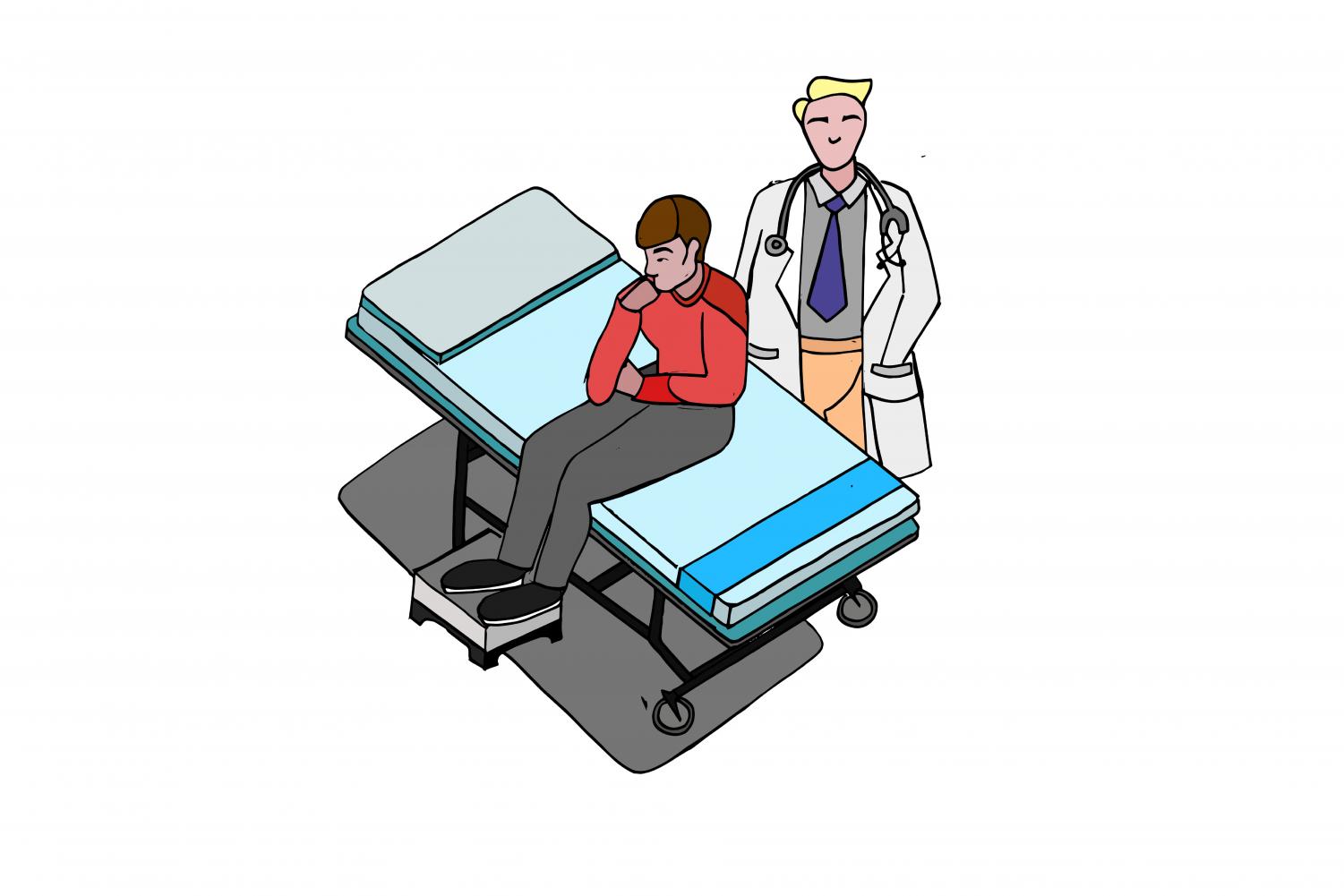 Teenagers have to learn to deal with many different things as they grow up. One of these learning curves is figuring out how they want to approach the healthcare system. (Art by Kate Goodvin)

Teenagers have to learn to deal with many different things as they grow up. One of these learning curves is figuring out how they want to approach the healthcare system.

What Should I Tell My Doctor?

The United States healthcare system is complex. Through those complexities, teenagers can get lost in understanding what their rights are...specifically, what stays confidential

Teenagers navigate a sea of choices as they grow up. This includes their healthcare. Some of the different questions teens may face include: Should I see a doctor alone? Should I come out to my doctor? What should I tell my doctor?

“I’ll tell my doctor stuff about my sexual activity, but that took me a bit because I was scared about my parents or anyone in my family finding out. If [doctors] say anything like, ‘Do you use drugs or alcohol,’ I say no even if that is the case,” Jane* said.

According to a recent study by The Journal of Adolescent Health only 43% of teenagers had a private meeting with their doctor. Many teenagers express nerves about sharing personal information to their doctor and having a parent in the room can heighten those nerves. Many teenagers are unclear on what stays confidential between themselves and their doctor. For many teenagers, the biggest question they have is, What should I tell my doctor?

“Ideally, everything, because it matters. If [the minor] is there with abdominal pain, it could be a sign of a sexually transmitted infection that won’t be necessarily investigated if you’ve told [the doctor] that you haven’t had sex. We are kind of taught at med school to never believe a teenager, [to believe] that they’re all lying, but I know they all aren’t,” Michelle Miller, MD, said.

Anything that is told by a minor to their doctor in private is considered confidential unless it has anything to do with the minor hurting themselves or others. According to Iowa law, a minor can be tested for sexually transmitted diseases and pregnancy without having their parents notified. Minors can also learn about contraceptive care from their doctor and they can donate blood if they are 17 or older. Conversations about running STI tests or getting a pregnancy test are anonymous. However, if they are run through insurance, the parents will get the bill. While the parent can’t tell the result of the test, it will show them that a test was done. The only exception to this is that HIV-positive results will be communicated with parents of the minor. If the minor wants to be sure their parents don’t find out they were tested, they must pay for the test themselves. While pregnancy tests are cheap and accessible through drug stores, STD testing is more expensive.

“If people really want to have that done confidentially they need to go to Planned Parenthood or somewhere else, or be willing to pay for something like that out of pocket,” Miller said.

For teenagers, one of the reasons they choose not to tell their doctor everything comes from the fact that it’s personal.

“I feel like it’s the way [doctors] bring it [sexual activity and drug usage] up. They’re just trying to make conversation, but it makes me uncomfortable and it’s in the realm of personal stuff so it’s hard sometimes to share. They’ll say, ‘Oh, it’s for your own safety.’ But my mind will say, ‘Oh, you can’t say that because that’s illegal,’” Jane* said.

“[Drug usage] is still covered unless they say that when they’re using drugs they think they may kill someone or that they may harm themselves. That’s still all protected,” Miller said.

If a pregnancy test comes back positive, or a minor tells their doctor they are pregnant, that is also still confidential.

At about the age of 12 to 13, doctors ask if the patient would like their parent to leave the room. While this is suggested to the parent, the parent does not have to comply. Doctors try to ask these questions in private, in hopes that minors are more likely to be honest without a parent in the room, yet Miller has found sometimes it helps to have a parent in the room. Miller asked a 13-year-old boy if he knew people who juuled while his mother was in the room. When he responded yes, it alerted the mother to start a conversation about juuling. Miller said the mother told her that they spoke about juuling on the drive home.

The state of Iowa has some of the strictest abortion laws in the country. One of them is specific to minors.
According to the Iowa Department of Health, minors cannot receive abortions without getting consent from parents or grandparents 48 hours prior to the abortion. A judge can excuse a minor from telling their parents. The other way that an abortion could be confidential would be if the minor is emancipated, has been married, or was ever married.

“I think it’s important that minors’ parents know what surgeries they are getting. Like I would never go get a surgery without asking my mom. I know that abortions are a procedure not a surgery, but I think you should be able to tell your parents something like that, but if certain people can’t it’s a good thing you can talk to a judge,” Isabel Jones ‘19 said.

When people turn 18, their patient confidentiality laws shift. While everything is still confidential, if they are still on their parents’ insurance bills, those tests could be found by the parents.

“After 18, people have the chance to sign something that says, ‘My parents are privileged to information about me.’ A lot of 18-year-olds sign that not realizing that it does also cover the other things that they might not want their parents to have access to,” Miller said.

At the age of 18, some high-schoolers will transition away from a pediatrician. Each person’s unique needs change how many and what types of doctors they should go to. Some people choose to go to their pediatrician through their post-college years. There is not a medically necessary time for people to transition. Miller suggests that by the age of 21, women should be seeing a gynecologist.

People can stay on their parents’ healthcare plan until the age of 26. While this does mean a person’s medical records are connected to their parents’ insurance for longer, it doesn’t mean they lose their confidentiality.

“For most, it’s not an option to just get off [their parents’ insurance] because they want to not have this come up to their parents, because they don’t have other good options. Most people stay on as long as they possibly can,” Miller said.
People who are part of the LGBTQ+ community face another question: Should I come out to my doctor?

For students who are unsure about coming out to their doctor, there are clinics that are specifically LGBTQ+ friendly. There is a sticker that these offices tend to have on their door. It is rainbow with the caduceus on it.

“Generally we’ve gotten better over the years of saying, ‘Do you have a boyfriend or a girlfriend or are you dating someone?’ instead of assuming opposite sex relationships,” Miller said.

To find more information about patient confidentiality laws, you can go to the Iowa Department of Health website, which has a more-in-depth look. Those who identify as LGBTQ+ also can use the Center for Disease Control website to find resources for clinics and other hotlines.

*Names have been replaced to allow for anonymity.