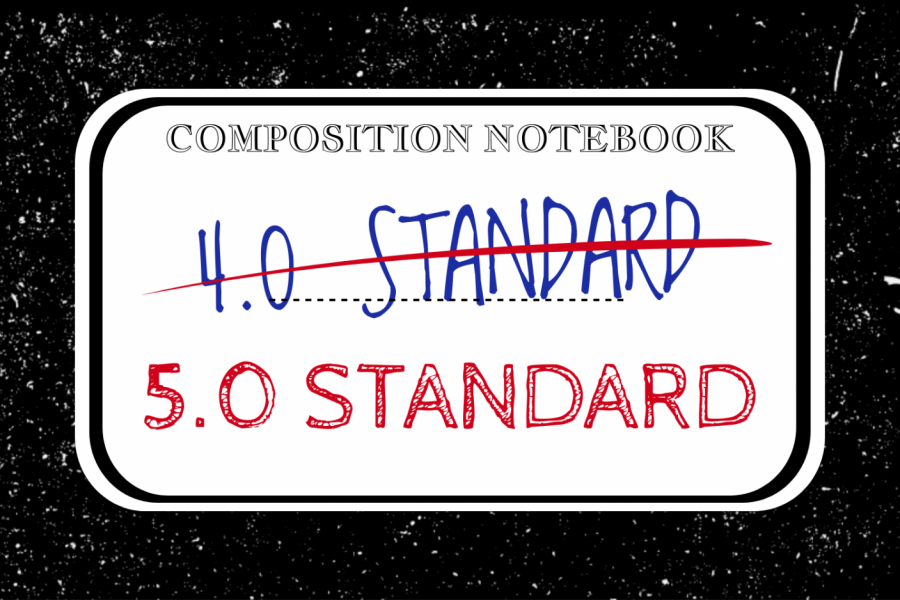 I was sitting in Mr. Burkle’s first period class, listening to his pre-teaching discussion when I realized he was saying something that piqued my interest. The mixed reactions that the news brought got me thinking about how I feel knowing my senior schedule would be affected by the scale change.

I came to the conclusion that I would have liked to keep the 4.0 system. For one, all the other years in high school we have had the 4.0 scale, and the school is not changing grades retrospectively because of complications with classes and the mass undertaking it would be. It would look weird for juniors to have three years of 4 point and one year of the 5 point scale. For another, the 4.0 scale is simpler to understand. It’s easy to see that a 3.2 out of 4.0 converts to a B letter grade. However, a 4.2 in one class translates to a B letter grade but with the added consideration of the B being in an AP class. It gets complicated.

A concern I have with ending up with weighted grades is that students will no longer have the freedom of choosing diverse classes because of the toll it might take on their GPA. The best part of going to City High is the different things you can try, and try it with different people. If the motivation for picking out classes is GPA-oriented, people could be missing out on opportunities for learning what they like and dislike. If weighted grades were a thing when I had been a freshman, I don’t know if I would have taken the classes or met the people I did.

At the same time, taking the AP test at the end of the year is part of the reason I even take AP classes, and I don’t think that will change. It would encourage students to enroll in more advanced classes and push themselves harder, although I still think all students should consider their own ability, regardless of GPA.

Even though I am still a little cautious about the scale switch, I realize that it’s a decision that was made based on reasoning with the entire district in mind. The counselors at City will write reports with college applications to explain the weird scale change, and the ICCSD school board is working hard to create a better system so we are not disadvantaged compared to other schools. It will benefit future generations of high school students with a weighted GPA, and I’m sure that it will all work out.

Like many students at City, I initially thought the new change from a 4.0 to a 5.0 scale was jarring. It didn’t get why we would change something that had made sense for years and years so far. But then I remembered that I had thought the same thing a few years ago when our school schedule was shifted to begin later in the day. Even though these situations are completely different, I realized maybe we should give it a chance.

For starters, the 4.0 system has had us at a disadvantage against other students nationwide as we compete for enrollment in college. Many other schools which use the weighted system show higher grade point averages than we do, and even though we can check a box on our transcripts to show our grades aren’t weighted like other schools, many colleges don’t go back to translate those results into a weighted GPA. For students wanting to get into an elite school, this makes the competition that much more difficult when there are students elsewhere who have 4.1 or above.

The thing is, we will still be at a disadvantage — my graduating class of 2020 especially, as we’ve already had three years of the plain 4.0 system. It’s nearly impossible to go back three years and translate the GPAs of every single student in the district, especially when many Honors and AP classes are graded on individualized scales anyway. This will make forming our cumulative GPA over all four years difficult — how do you take into account the weighted years against the regular-scaled ones?

While I’m still skeptical I do have faith in the administration. This change hasn’t been permanently worked out yet and the district is still trying to smooth out the wrinkles and deal with this new problem we share.

Even though I’m upset my cumulative GPA might be a little weird-looking when I graduate, I’m glad that at least my brother will go to school with the new system when he comes here in 2021. I think this a positive move on the part of ICCSD for the best interest of future students. The details of this switch haven’t been curated yet, and until then, we should trust that the adults behind it all are trying to look out for us.